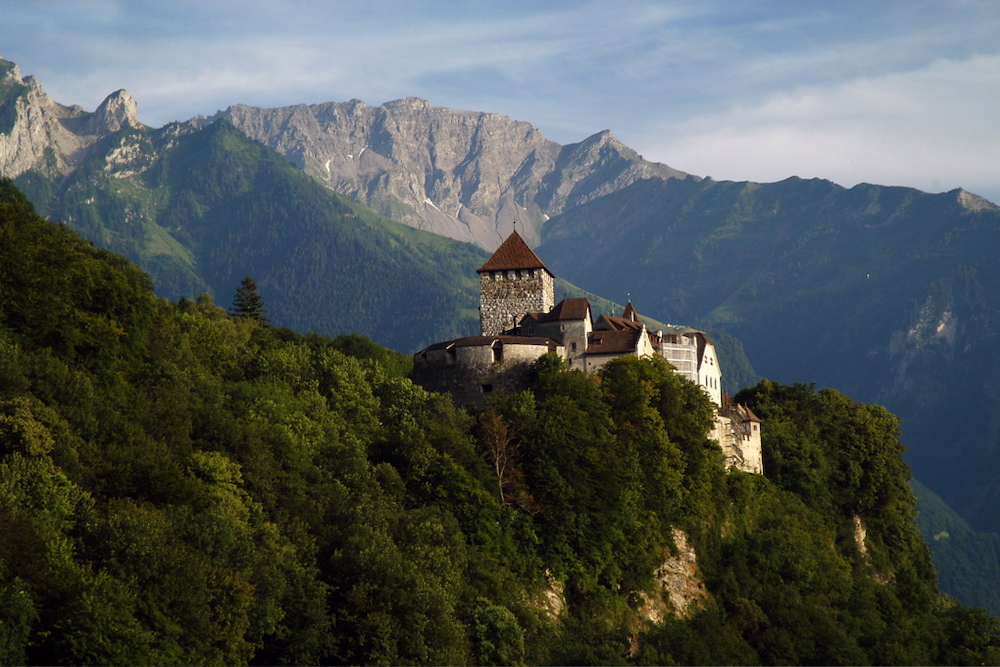 Vaduz Castle, overlooking the capital, is home to the Prince of Liechtenstein. Courtesy of Wikimedia Commons.

Liechtenstein, the nation of 38,500 in the heart of Europe, has for nearly a century deftly governed itself by combining two seemingly contradictory elements: direct democracy and monarchy. Rather than seeing monarchy and direct democracy as “either-or” options, the people of Liechtenstein have affirmed their belief that the two combined better serve the people.

Liechtenstein’s constitution of 1921 first established the principle that is still valid today: namely that the authority of the state is anchored in the Prince and the People. The demand was based on the growing democracy movement in Liechtenstein. With the new constitution of 1921, the tradition of the monarchy was continued, and at the same time, the power of the people was strengthened. Therefore, in the future and up to the present time, a consensus between the reigning prince and the people on relevant issues was necessary. This division of power has contributed to the stability of the political system and balanced political decisions.

The people gained significant rights in 1921. The prince could no longer unilaterally appoint the government, and he lost his three appointments to the then 15-member parliament (it now has 25 members). All members of parliament would be elected. Prior to 1921, the prince relied on foreign civil servants to run Liechtenstein. The new constitution, on contrary, mandated that government ministers be Liechtenstein citizens who were proposed by parliament and then appointed by the reigning prince.

Liechtenstein’s new direct democratic instruments included the popular initiative, which allowed the people to amend the constitution or laws by collecting signatures and putting their ideas to a vote. Another tool was the referendum against constitutional, legislative and financial decisions of parliament. Parliament also gained the power, on its own initiative, to submit decisions to the vote of the people. The people could also decide to dissolve parliament and thus trigger new elections.

The people of Liechtenstein have used these tools frequently. More than 100 popular votes have been held at the national level in the past century. And there has never been a restriction of these democratic rights. On the contrary, new rights have been added and the hurdles for using the tools have gradually been lowered. In 1992, the direct democratic instruments were expanded to permit the holding of a referendum on international treaties. The people were then able to vote on whether Liechtenstein could join the European Economic Area (EEA).

In Liechtenstein, the widespread view is that anchoring state power both in the reigning prince and in the people is not to the disadvantage of either side, but rather to their mutual advantage.

Within the princely house, according to the family statute, succession is governed by the principle of male primogeniture, i.e. the eldest son of the reigning prince is the designated successor. Reigning Prince Hans-Adam II and the hereditary prince are among those who also use direct democracy. In 2003, they triggered a popular initiative to revise the constitution which met with clear approval at the ballot box. This already shows that the princely house and Prince Hans-Adam II cannot be committed to a purely passive role in politics.

However, as long as the existing constitution is in force, the reigning prince retains far-reaching powers, including the right to dismiss the Government. In everyday political life, the prince maintains the right to veto legal and financial decisions; laws and treaties cannot achieve full force without his consent. The strong position of the monarchy enjoys great support among the population, as it is seen as an important pillar of Liechtenstein’s success and stability.

This therefore requires communication, and the development of consensus, between the people or the elected representatives and the reigning prince. It is rare for the prince to refuse to sanction an act of the parliament or the voters. The only time the prince overruled the people after a referendum vote came in 1961, when they approved a hunting law the prince opposed. However, the prince can often get what he wants merely by threatening the veto. A refusal to sanction was announced in a referendum on the liberalization of abortion in 2011 and in a popular initiative to limit the prince’s veto right in 2012. Both proposals failed at the ballot box, however, and the veto was unnecessary.

The Liechtenstein political system has managed to combine, creatively, the contradictory elements of representative democracy, direct democracy, and monarchy. The veto power of the prince and the people—together with control mechanism based on the rule of law and the binding nature of treaties (such as the European Convention on Human Rights)—ensures broadly supported and balanced decisions. The Liechtenstein system has produced very high levels of acceptance of political decisions and a high degree of satisfaction with the political system itself, as numerous surveys show.

As a result, the monarchy itself, as only one part of the government, is generally held in high esteem. The country’s enormous economic upswing since the 1940s has helped reinforce the good feeling. In Liechtenstein, the widespread view is that anchoring state power both in the reigning prince and in the people is not to the disadvantage of either side, but rather to their mutual advantage.