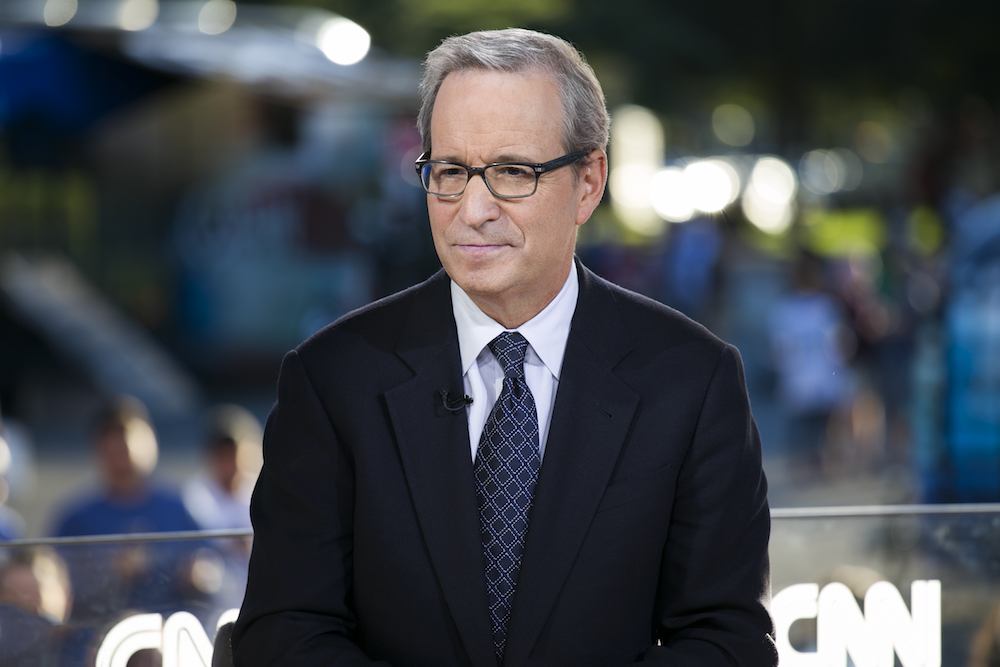 Ronald Brownstein is a senior editor at The Atlantic, a senior political analyst at CNN, and the author of several books, including The Second Civil War: How Extreme Partisanship Has Paralyzed Washington and Polarized America. Before moderating a Zócalo/Noēma Magazine event titled “Has Hysteria Conquered America?,” Brownstein called into the virtual green room to discuss Springsteen, Venice Beach in the early ’70s, and what’s on his Zoom bookshelf.

Your dad was an electrician. Did you ever think about following his path?

I always wanted to be a writer. I originally thought I was going to write fiction. And then I was selected by my journalism professor in high school to work on a student paper, and pretty quickly realized I was better at that than I was fiction.

I remember between my sophomore and junior year in college, my dad got me a job working at an electrical warehouse in Long Island City. And at the end of the summer, I remember very specifically saying to him, you know, Dad, I really appreciate you getting me this job, and everything you did for me, but I think, from here on out, I don't intend to make it any other way but writing for the rest of my life.

You were an English major at SUNY Binghamton. Was there a book you studied there that changed your life in some way?

The Titanic book that I read in college was Ulysses. I mean, it just seemed to me unimaginable that someone who was in the same species as me wrote something that monumental. Ulysses gave me this sense of like, man, you should aim high, because it was so beyond anything that I ever read in terms of achievement.

The nonfiction equivalent of that, and this is going to almost sound like a cliché, but it wasn't a cliché in 1975 or ’76, was The Power Broker. Each of them just had gave me this sense of like, wow, you know, you should aspire to do something really good, because these are like, really, really good.

I take it this means you’re part of The Power Broker Zoom bookshelf club?

I have, like, serious Zoom bookshelves, if you've ever seen me on CNN. On my left shoulder, you can see all of the LBJ books [the multi-volume biographies by Robert Caro, author of The Power Broker]. And The Power Broker is somewhere over my right shoulder. So it's there, but it's the Johnson books that are more prominently displayed. And I have to say that Master of the Senate [volume three] is probably even better than The Power Broker.

You live in Venice Beach. What piece of local history there resonates the most with you?

I have this book coming out early next year [Rock Me on the Water], which is a history of L.A. culture and politics in the early 1970s. And I actually write a reasonable amount about Venice in that era, mostly the story of Tom Hayden and Jane Fonda.

Hayden, at maybe the lowest point of his life, after he was expelled from this commune he started in Berkeley, washed up in Venice, and tried to rebuild his life there anonymously, living right down by the beach in this ratty little apartment. I have a pretty great account of Hayden's reinvention in Venice, and eventually meeting Fonda and then joining forces in the early ’70s. So I would say, the Venice of the early ’70s.

You would have been around 16 in 1974, when the book is set. Do you remember what piece of pop culture influenced you the most at that age?

Born to Run. No question. When I heard “Thunder Road,” my life changed. I remember it was the summer of ’75, so a year later. I grew up in New York. And I was at my girlfriend’s parents’ house. She had these large Advent speakers, and we were sitting in her room, listening to WNEW-FM. I'm pretty sure it was Dennis Elsas, who is still on SiriusXM. Something was playing on the radio, and he literally cut in in the middle of the song and said, “OK, we're not going to wait another minute. We've just gotten the new album from Bruce Springsteen, and we're going to play it right now.” And I just remember he dropped the needle, and “Thunder Road” came on, and I was like, whoa.

Born to Run was just such a monumental achievement. It was just hard to believe that one guy put all of these great songs on a single album.

And the other thing the other that happened in ’75 was Blood on the Tracks [by the Rolling Stones] came out. The two of them were just such unbelievable achievements. I've always found artistic achievement very inspiring. Not that I can be an artist of that magnitude. I think like a lot of people, Bruce just spoke to me and just gave me above all the sense of passion, like, don't drift through life, man, you know, roll down the window, and let the wind blow back your hair. It was just so powerful.

Is there anything of this moment in pop culture that sort of gives you that Born to Run feeling today?

Like everybody else, you get out of the main current of music at some point. I mean, there's still bands that I like, but I think it would more likely be a book … it would more likely be some of the novels about modern life. If I think about the books that have affected me the most in recent years—certainly American Pastoral by Philip Roth. The Amazing Adventures of Kavalier & Clay by Michael Chabon. A Visit from the Goon Squad by Jennifer Egan. Underworld I love by Don DeLillo.

I’m trying to think of the last couple of years… So much of what I write about is how changing demography is changing the country, and also the reaction to changing demography. It's not just that the country is changing demographically; it's that those changes have crystallized a backlash that Trump rides and intensifies. And I’m not sure we have the book that fully captures that. There's Do the Right Thing from the ’80s. And there's Get Out, which is one version of that from now. But I don't think we yet have the monumental novel that captures this. Am I missing one?

That’s an even better question.

I should go back a step. I think history will have no trouble understanding that everything that’s happening in America now is rooted in the fact that we are en route to becoming a true world nation, most diverse country, a majority non-white country. I don't think history will have any trouble understanding why our country is in the position it's in. Why Trump emerged. But I'm not sure we have the truly great novel that captures that yet. That brings that experience to life.

American Pastoral is basically the story of the Baby Boomers, and their parents, and it's a great, great book, but it's not this story. I don't think we have this story yet. Or it may be that this book exists, and I haven't seen it. I'm open to suggestions from the Zócalo audience.

Last question: What was the last thing that inspired you?

What happened after the death of George Floyd was pretty inspiring. Because it did show a big part of the country trying to grapple with the central issue that we face over the next 20 years—how do you create a more equitable, inclusive society, when you are diversifying to this extent?

It showed people really trying to address: What does it mean if you're in a country where a majority of the high school graduates in a few years are going to be people of color—and all the good jobs, all the commanding heights of the economy, are still run by white people? It's just not a sustainable model. You know, you’re in South Africa if you do that. But this was kind of like the other side.