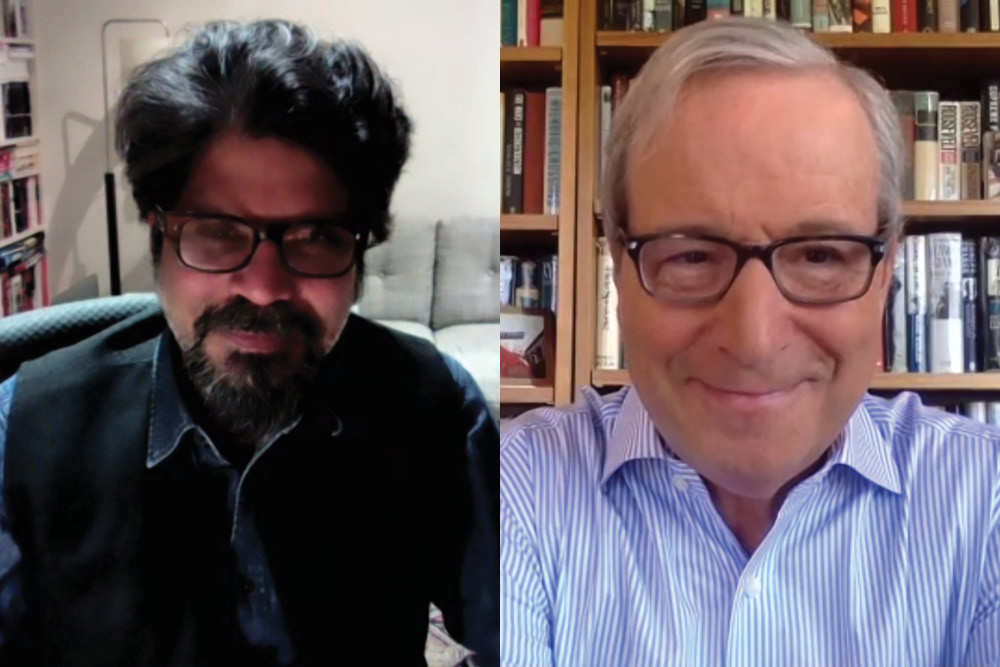 Political hysteria has conquered America—and made the United States much more like the rest of the world.

Mishra and The Atlantic senior editor Ronald Brownstein, who served as discussion moderator, spent over an hour discussing how international trends and intellectual history might explain today’s American politics.

Those politics, Mishra and Brownstein agreed, are full of conspiracy theories, xenophobia, over-the-top rhetoric, and questionable thinking. Over the course of the event, the two writers tried to locate the reasons for this crack-up—in economic dislocation, racism, wars, imperialism, and especially in Americans’ misunderstanding of their own place in the world.

Mishra, who is Indian and the author most recently of Bland Fanatics: Liberals, Race and Empire, suggested that it may have been easier to understand what’s happening in America if you’re not American. “I’ve come to the subject not through the American experience, but through the experience of India, supposedly the world’s largest democracy,” said Mishra. During his life, education, and work as a writer in India, he saw democracy decline. “A whole culture of hatred, of division, was emerging,” he said, “and many people were happily subscribing to it and looking for a demagogue who could at least seem to be protecting their rights.”

“With that kind of training,” Mishra concludes, “what’s happened in America hasn’t come as a huge surprise.”

“I think the 2020s in America are going to be the 1850s,” said Brownstein, “where you had a rising majority whose agenda is being stalemated by a minority that controls a lot of the key institutions.”

Pressed by Brownstein, a leading American political journalist, on what explains political hysteria in the U.S. and around the world, Mishra returned to themes from his previous book Age of Anger: A History of the Present. The modern world, he said, is based on “contradictory promises.” The first promise is equality and individual dignity. But the second promise, “is that we will realize individual and national power through capitalism.” That, he said, is “when the contradictions start becoming sharper and sharper, because capitalism tends to generate inequality.”

Inequality creates disaffection with society, and starts to undermine democracy. And democracy’s spread in recent decades, because it coincided with the rise of neoliberal capitalism, produced a backlash because “the promise of equality got entangled with the promise of prosperity,” Mishra said.

Right-wing populism, Mishra said, is part of that backlash, and is driven by a desire for protection not just from capitalism but from the many disasters afflicting the world.

“There’s a sense that the world is falling apart and we have to take drastic measures to protect ourselves,” Mishra said. “The survivalist instinct has kicked in, in many different parts of the world.”

This backlash has surprised many leaders and thinkers in the U.S., the U.K., and the West who Mishra described as “too self-absorbed, far too self-congratulatory, [and] not really perceptive enough to the sufferings or ordeals of ordinary people.” Mishra also cited the widespread hubris that the U.S. had reached “a particular summit of human achievement.”

“One reason we are unable to look at our world clearly is because we are too influenced by a certain ideology of progress and of continuous, irreversible improvement,” said Mishra, adding: “Trump has been welcome in at least one aspect—he’s forced us to confront many of these problems that we understated or ignored or suppressed in the past.”

Mishra said the country’s recent path posed a warning to those who saw it as a global model. “What America offers to the rest of the world is a cautionary tale. You were trying to imitate America, but America can end up in a very unfortunate place.”

Very few progressive thinkers in the West have been exposed to a lot of non-Western thought, said Mishra, citing, in particular, the criticisms of Western liberalism by Gandhi. He lamented how Western writers routinely pontificate about Iran or Russia or other societies without speaking the language, or reading the leading thinkers from those parts of the world. Those with broader experience and knowledge, who often are outsiders or minorities in a society, he said, can be more perceptive.

Brownstein, who authored The Second Civil War: How Extreme Partisanship Has Paralyzed Washington and Polarized America in 2007, agreed. “As a card-carrying member of that mainstream punditocracy, I can say that the person who I encountered in 2016 who was the most convinced throughout that Trump could win was an African American pollster named Cornell Belcher.” Belcher correctly predicted that Trump’s open racism “would not be disqualifying for as many voters as someone like me probably thought in 2016.”

During a question-and-answer period, audience members offered queries about China, the balance of power between the countries, the pandemic, the global power of American culture, and what Mishra thinks of Los Angeles (he said he enjoys going for walks and visiting bookstores on his visits). Some audience questions asked the two writers to predict the future.

“I think the 2020s in America are going to be the 1850s,” said Brownstein, “where you had a rising majority whose agenda is being stalemated by a minority that controls a lot of the key institutions.”

In response to a question about the perceptions of the United States, Mishra said the country’s recent path posed a warning to those who saw it as a global model. “What America offers to the rest of the world is a cautionary tale. You were trying to imitate America, but America can end up in a very unfortunate place.”

For the U.S., humility is now in order, and a willingness to look and think more broadly about everyone’s needs. “Arrogance [and] hubris have, in a way, reached a monstrous culmination with those images of Trump on the White House balcony taking off his mask,” Mishra said. “Humility has an opportunity right now to make itself manifest.” 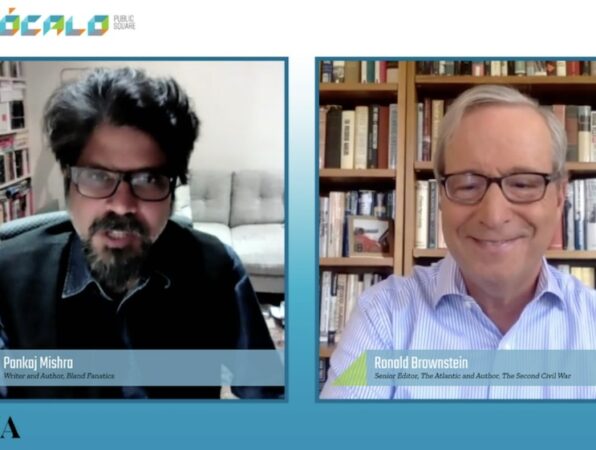 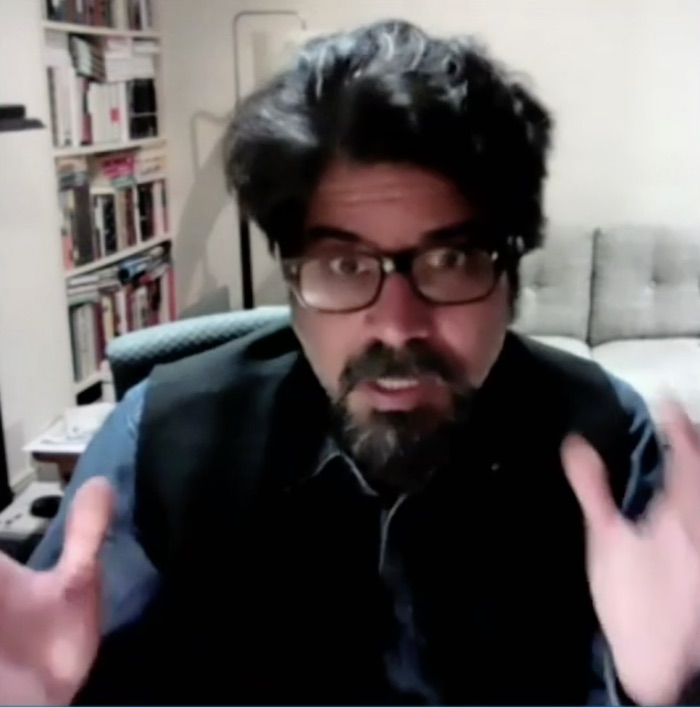 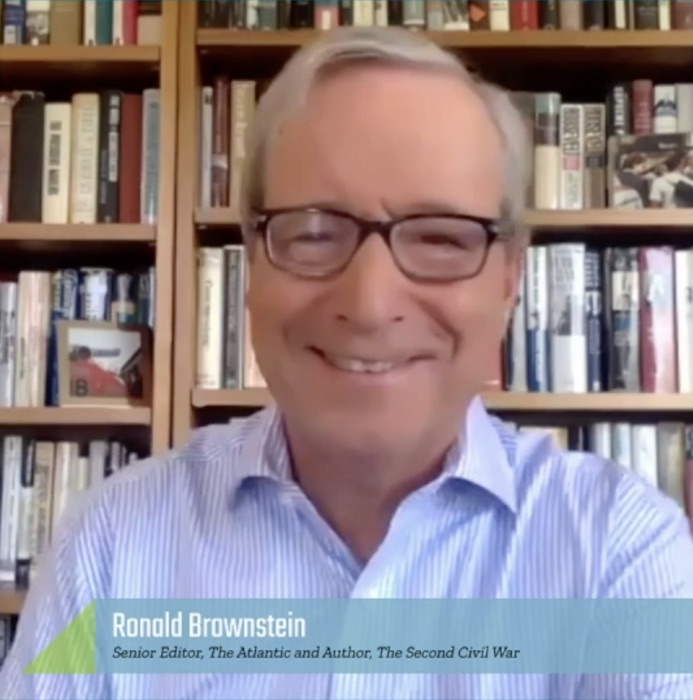