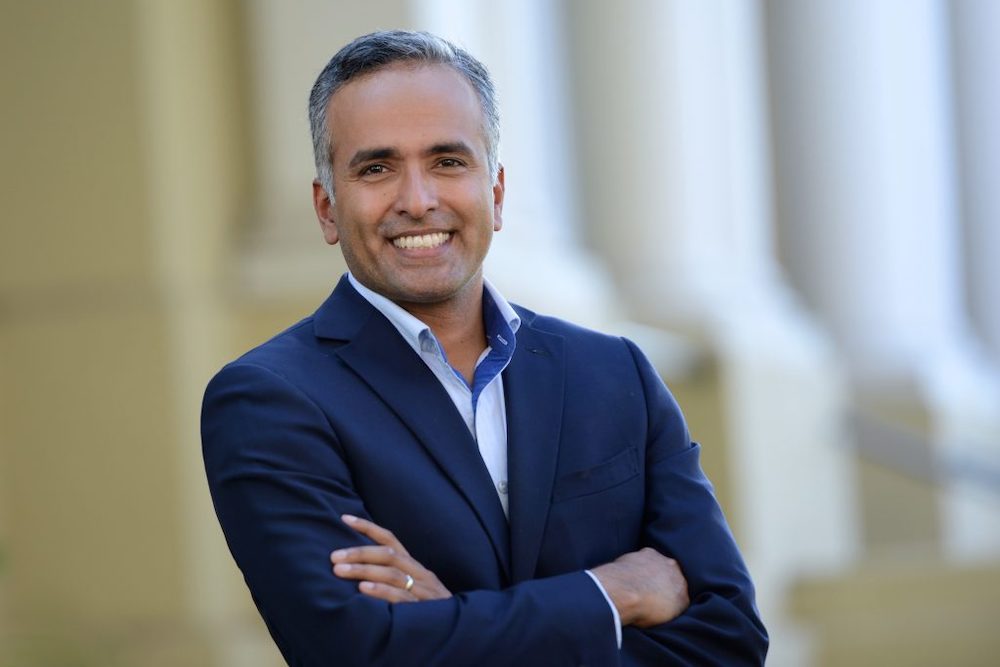 Karthick Ramakrishnan is a professor of public policy and political science at UC Riverside and the founding director of its Center for Social Innovation. The author of seven books, most recently Citizenship Reimagined: A New Framework for State Rights in the United States, Ramakrishnan also directs the National Asian American Survey and AAPI Data. Before joining a Zócalo/Daniel K. Inouye Institute panel, “Does a New Wave of Anti-Asian American Racism Require New Ways of Fighting Back?,” he chatted in the virtual green room about how watching ’88 election ads introduced him to U.S. politics, why we can’t escape citizenship, and his Zoom pro-tip.

You've mentioned that after immigrating to the U.S., your family would watch the Sunday talk shows together to learn about American politics. Do you remember what your first impression of American politics was?

I think a lot of the conversations and discussions we would have at the dinner table and even on weekends were about U.S. foreign policy. We talked about India quite a bit, and we kids would argue with my dad about politics in India, U.S. foreign policy—but it was a good-natured kind of argumentation. Within the US, we were all on the same page in terms of what we stood for. But in terms of that election, we saw a little bit of the dark side of American politics. Especially with the Willie Horton ad, I definitely remember that.

I also remember the debate when one of the hosts of 60 Minutes and asked Michael Dukakis about a hypothetical scenario about Kitty Dukakis potentially being raped by someone who got out on furlough, and if he would still oppose the death penalty under those circumstances. I remember that; it was so shocking.

I also remember SNL. There were all these spoofs about the debates on SNL. And I remember watching SNL and getting a kick out of it, too. Jon Lovitz was playing Dukakis.

Where do you look for an example of progressive and inclusive citizenship?

First of all, I would say the Republic of California. A modified version of what Canada has would be an ideal. Canada doesn't prioritize family enough, and its notion of skills, I think, is a little bit constrained, but overall, I think Canada's system is a good one.

Do you think that translates to Canada being one of the best places to be an immigrant?

Yeah, the way that multiculturalism has flowed in Canada—and a lot of that is because of Quebec—has actually opened up the way for other immigrant communities to feel more welcome.

You studied at Brown and Princeton. Do you have a pet peeve about the Ivy League?

The Ivy League universities, like many other places, are having an important reckoning when it comes to racial equity. I'm hoping that in addition to racial equity, they also think about their elite status and how they can make themselves more accessible.

Besides having published seven books on immigrants and politics, you lead several initiatives, including the Center for Social Innovation and AAPI Data. Do you have any time for hobbies?

I like to dabble in graphic design, but a lot of that ends up coming into the work that I do, like infographics and even some of the logos I've created myself.

Is there a teacher or a boss who has had a significant impact in your life or on your teaching style?

A colleague of mine, Manuel Pastor at University of Southern California. I’ve found it inspiring to see someone who's in academia who's had a lot of impact in terms of social justice.

Your most recent book maps out five dimensions of citizenship. What do you hope citizenship will look like in 50 years?

I'm hoping that citizenship will be robust—not only at the national level, but also at the state and local level; that we don't simply constrain citizenship to the narrow path that we have right now. And that means not only rights, expanded set of rights, but also a sense of duty and obligation to make sure that we build communities that take care of everyone.

Is there any part of you that thinks citizenship is an antiquated concept that might not be necessary in the future?

No, the people who’ve called for the death of the nation state, they've been wrong time and again.

We live in a global world. There's a lot of permeation in terms of information flows, in terms of capital flows, labor, et cetera. But currencies still matter. Militaries still matter. Geography still matters. And so, citizenship will still be with us, it'll just take on different forms. It can get more complicated, but I don't think it's going away anytime soon.

Where do you think the animosity against immigrants in the U.S. comes from?

I push back against the notion that discrimination and prejudice is somehow innate. What we have found, time and again, is the potential for it is there, but it takes a certain set of political actors to exploit it and to blow it out of proportion.

This anti-immigrant movement that we saw between 2005 and 2010—it's not like all of a sudden immigrants showed up. They were always there, but it was the demagoguery. It was the post 9/11 context, where it was a certain media environment and a national security environment, in which it was possible to whip up these fears.

We've seen this time and again in American history. In many ways, we thought that we were beyond that. What we saw with Trumpism, there was definitely a preview of it during the decade following 9/11. You saw the growth of nativism and anti-immigrant sentiment within the Republican party, against the wishes of leaders like George W. Bush, who were trying to pass immigration reform, who were trying to create a more inclusive Republican Party.

You had folks like Tom Tancredo, Lou Dobbs, Kris Kobach, many of these immigration hardliners that were able to steer the Republican Party away from being a more welcoming party.

We're paying the price as a country, and we will continue to pay the price until the Republican Party can become more moderate again when it comes to immigration and on race.

Do you have any mementos or items on your desk that help you stay focused or centered throughout all of the Zooms?

I have one of those foot rests that have these big bumps. It's just nice to get a little mini massage from time to time.