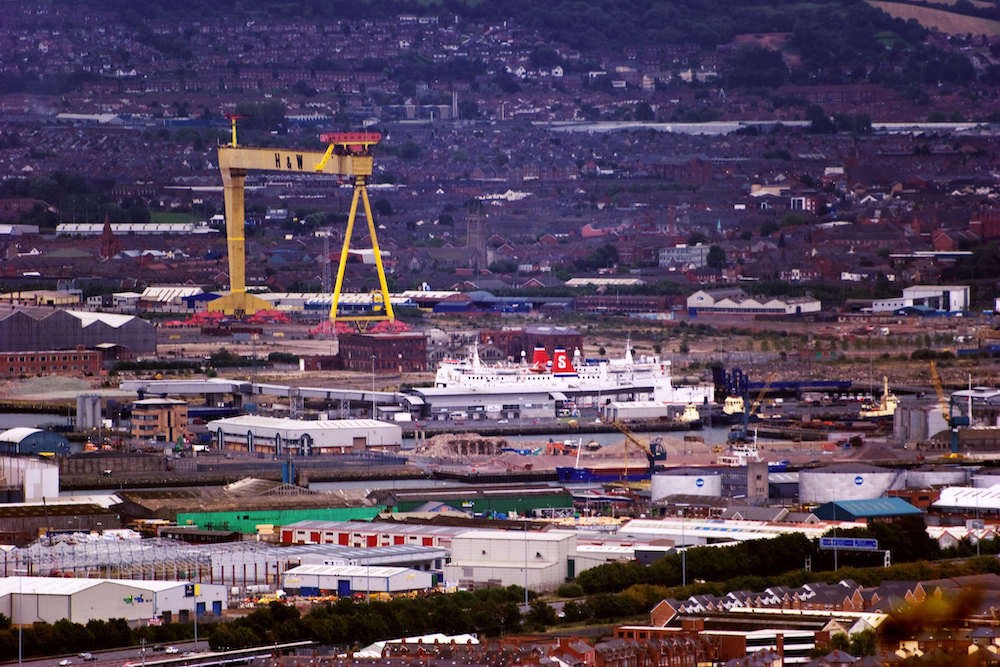 A photo of Belfast Harbour, taken from the hill next to Belfast Castle. Courtesy of Etrusia UK/flickr.

Whether you’ve boarded from Liverpool or Heysham
or Stranraer, years later the journey is the same
along the Lough at evening, the chimney of the power station

in Kilroot, Carrickfergus Castle, white eiders skimming
the surface of the bay at Carnalea, the oystercatchers at Cultra
piping on the rocks, as you slide past the gantries at the yards

where David and Goliath tower like the spires
of a decayed cathedral. Here’s where I first heard
hexameters of Homer intoned in harsh Ulster accents,

Speak to me, Muse, about the many-sided hero who travelled
far and wide after he sacked the great town of Troy:
many were the cities he visited, the customs he came to know

Here’s where my grandfather built the Titanic.
Here there were two cathedrals rising in opposition
and two stories each told with a certainty dispensed

like a cheap drug, with hatred scribbled on the walls,
King William on his horse, Up the Rebels, to Hell
with the Pope, and one man’s hope was another’s

damnation. How could I not be tempted by the glory
that was Greece, lucidity and sanity, a golden mean between
opposing ills, Athens revered in the words of Pericles?

We are an example to others rather than imitators. Our
administration favours the many instead of the few; this is why it is
called a democracy. Our laws afford equal justice to all…

There was too much of Belfast, bacon and soda bread
for breakfast on Sundays before church, when the swings
in the park were padlocked to save us from the shame

of play on the Sabbath, when the sound of a ball bouncing
after Bible class would lead to confiscation. But there were kestrels
in the trees, and long wet grass, and yellow Easter gorse,

and cricket in the park at Orangefield, and linen mills,
and buckets full of Armagh strawberries, but only in July,
tart and sweet, and sea-trout from the rivers of Antrim,

served poached with the peas I shelled with grandfather
as we sat on the doorstep, and I pressed him to tell me
stories of the past, the ships, the war, the Troubles.

I beg you, Nestor, if ever my father, the noble Odysseus,
pledged you his word and made it good in action…
remember his story now, tell me the truth.

He’d been a joiner in the yards, rough, calloused hands,
one finger on the left shortened by an accident while framing
a ship’s hull, and as he talked he rubbed a rivet between

his thumb and index finger. That evening was the only time
I saw him cry, never before for friends lost on the Titanic, not for
his cousins dead at the Somme, the massacre at Thiepval Wood,

their unmarked graves, the bloody English generals’ stupidity.
I reminded him of Bobby, his first born, who came in from the garden
and lay down, a splitting headache, saw lights circling in the room.

Grandmother said those were angels come to take him.
Vomiting, convulsions, no remedies in nineteen and eleven,
no miracle of penicillin, no cure for encephalitis. Bobby was six.

There was too much of Belfast, but life was an expanding
ladder and I was a glutton for the future. Was it selfish to want
to see other worlds? We all choose our ways to become exiles.

if I stay abroad and wage war around the Trojans’ city,
my homecoming will be lost but I will have undying glory;
but, if I go home to my beloved fatherland, my noble glory will be lost

My mother wouldn’t let him smoke at home, so I’d collect him
from his corner at the bar, the click of snooker balls, blue smoke
of Gold Leaf rising while the creamy lace of Tennent’s lager sank

in his empty glass. “What do I hear”, he said, “about you going
over the water? All this Greek and Latin has turned your wee head.
Sure the sea is the same blue everywhere, and a man’s as happy

as he makes up his mind to be.” He pushed his Reader’s Digest
across the table. “If you won’t listen to me maybe you’ll listen
to this Horace chap”. He pointed to a phrase he’d underlined:

qui trans mare currunt caelum non animam mutant.
Those who run across the sea change their sky, not their heart.
I helped him from his seat. He took my arm, we walked.

We never talked of Horace’s words again. It was June, a Northern
evening light at ten o’clock, the mist drifting soft over
basalt hills, a sky like no other, rosy-fingered to the west.