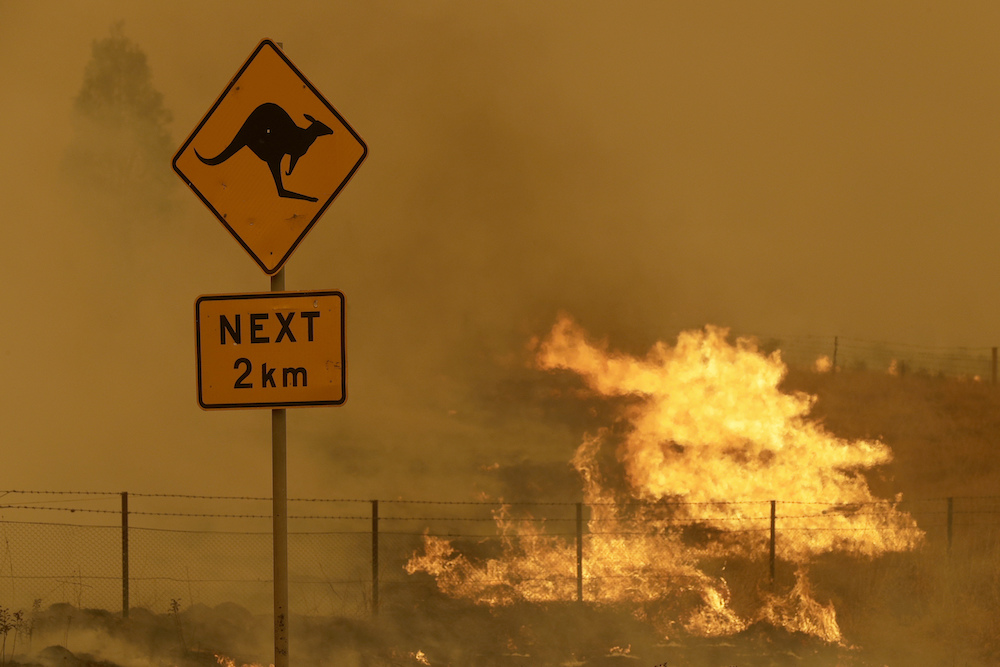 Charcoal fragments are black, often small, and generally unremarkable. Most people would not realize it if they were to come across one. But over the past 40 years or so, Earth scientists have been revealing the story of fire through time by examining these little bits of carbon embedded in rocks throughout the world.

Understanding the history of wildfire is relatively new. That’s because fire science often falls between the cracks in established disciplines. As the well-known historian of modern fire Stephen Pyne has pointed out, while many universities have fire departments, they are never academic ones.

But a steady gathering of data has demonstrated that fire isn’t just an integral part of today’s Earth system—how the geosphere, biosphere, and atmosphere interact in our own time. Fire was an important feature of the Earth before humans, too. It has had an ongoing impact on the atmosphere—both on carbon dioxide, and especially, oxygen levels. It has also guided the evolution of plants and has sustained the health of ecosystems by helping to maintain the balance of species that live in them. These discoveries—and the lessons they teach us—should inform how we think about and manage fire in the modern world, and even encourage us to welcome it more often than we have. 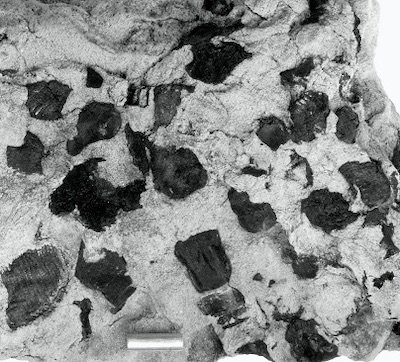 Fossil charcoal in sediments from 170 million years ago. Courtesy of A. C. Scott

The earliest evidence of burned plants, preserved as charcoal, is found in rocks of the late Silurian Period (around 420 million years ago). But during the late Silurian, plants were too small to fuel big fires. They had to evolve into a large number of groups—several of which included trees and tree-like species—for the Earth’s first widespread forests to appear and offer evidence of the first extensive wildfires. Many of these charred materials date from the aptly named Carboniferous Period (between 360 and 300 million years ago), when plants first diversified throughout the world into a wide range of ecological niches.

An important feature of charcoal is that it preserves the detailed anatomy of the plant from which it came, thus allowing us to identify the plants that were burned. Examining these charcoal remnants has helped scientists trace how wildfires evolved, along with the Earth, over the next 200 million years or so. We can discern, for instance, that major changes were taking place in the Earth’s vegetation during the Cretaceous Period (between 140 and 65 million years ago, when dinosaurs, including Tyrannosaurus rex, walked the land). This was a time when the early flowering plants first evolved and spread. The seeds of these small and weedy plants blew in after extensive fires cleared other vegetation. The plants then grew rapidly to cover the bare soil, expanding the area they covered. This was also a time when many groups of plants with fire-resistant or fire-loving characteristics thrived. Pines evolved to have thick bark to shield them from flames. Eucalypts, which are very flammable but developed mechanisms to regenerate after fire, evolved in the southern hemisphere. Other plants such as proteas—widely found in Australia and southern Africa today—flourished thanks to wildfires, too.

The last and perhaps most significant change in the Earth’s vegetation was the evolution of grasses and grasslands. While we have evidence of grasses from more than 20 million years ago, it was only around 7 million years ago that we begin to see signs that grasses, too, co-evolved with wildfires. So-called C4 grasses, like the tall varieties that grow in the savanna, were able to thrive in dry conditions—and spread across the globe, especially in Africa where there was an extensive dry area across the southern part. Their success, like that of the Proteaceae, was linked to fires. Grasslands burned on a regular basis, killing shrubby vegetation and trees nearby and creating more space for grasses to return more easily. 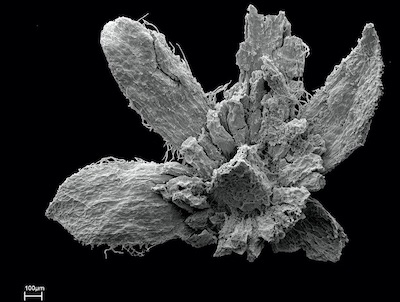 Charred Flower from the Cretaceous, 120 million years ago. Courtesy of Ian J. Glasspool. 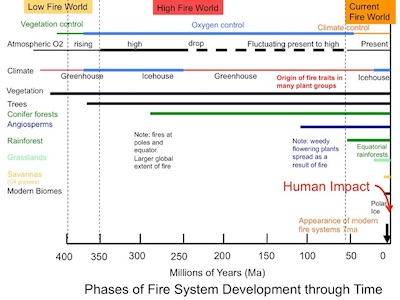 Summary of fire through time diagram. Courtesy of A. C. Scott.

As we continue to learn the history of fire on this planet, we can better understand the nature and role of fire in many of the world’s ecosystems today. Many, such as South Africa’s Cape fynbos shrublands and many coniferous forests, have natural wildfire; indeed, some, including savanna grasslands, could not exist without fire. Other ecosystems, such as rainforests, cannot survive when fires are permitted to burn.

For thousands of years humans seemed to instinctively understand this complexity, and welcomed and used wildfire in a number of ways, both in the open agricultural environment as well as in the home. But over the past 100 years or so, there has been a major transition in how we view fire: As towns and cities have become larger, people have opted to extinguish natural fires. Urban populations have lost knowledge of fire and have demonized it, amping up their fear of flames at the same time that they have built out into remote wilderness areas with flammable vegetation. Today if a blaze breaks out at all, it is contained and extinguished in the service of protecting people and property. But sometimes letting fires burn may be the best option for an ecosystem.

Understanding the evolution and biology of ecosystems’ fire responses might help communities recognize which species around them are fire-dependent, which are fire-sensitive, and how to make wiser choices when managing wildfires.

Understanding the evolution and biology of ecosystems’ fire responses might help communities recognize which species around them are fire-dependent, which are fire-sensitive, and how to make wiser choices when managing wildfires. We need to appreciate that not all vegetation is the same, and that transposing different forest practices across different regions may not work. It has been shown, for example, that the conifer forests of North America burn much more frequently and vigorously than the conifer forests of Northern Europe. The ecosystems respond differently, and they should therefore be managed differently as well.

Environmental factors that influence fire can combine to have a devastating effect. Wildfire is a normal part of the landscape in the western United States—but the spread of invasive grasses and increased development, along with changes in climate that are leading to earlier spring snow melt and a longer dry season, are almost certain to produce more frequent and larger fires.

Climate change is fueling more extreme wildfire events all over the world. As temperatures rise and winds increase, small fires appear to be spreading more rapidly and amalgamating to produce larger fires. Large pyrocumulus clouds created by vast blazes like the 2019 Australian megafire produce dry lightning and create more ignitions. Most worrying, global warming is changing fires’ internal dynamics, making them more dangerous for firefighters and the general population. Historically, fires have expanded from surface vegetation, where they burn relatively slowly, to tree crowns where they spread more rapidly—and firefighters have depended on this model to predict how a fire will spread as they plan out their work. However, we are now seeing dramatic changes in fire behavior. Firefighters, including the renowned Spanish wildfire specialist Marc Castellnou, have noticed that surface fires appear to be spreading faster, accelerated by increased wind speeds. During the 2018 Camp Fire that destroyed the town of Paradise, California, flames consumed buildings but left the tops of trees surrounding them with unburned crowns, their leaves still green. This indicates that the surface fires are outpacing canopy fires, which means that firefighters’ planning calculations may be wrong. Fires typically used to die down at night as temperatures fell, giving firefighters a break. Increasingly, that appears not to be happening. 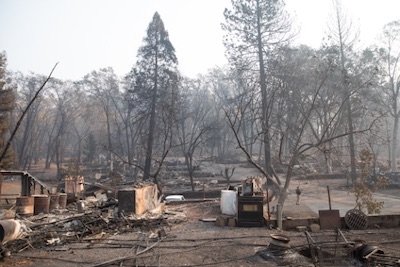 The aftermath of the 2018 Camp Fire in Paradise, California. Photo by Shealah Craighead.

We urgently need more research to help to understand how and why fires are changing—and how to deal with the new conditions. In the meantime, initiatives such as FireWise in the U.S. and FireSmart in Canada, which engage with communities to help educate and develop local community initiatives, provide information and experience about how to plan and keep safe in the event of a wildfire.

Wildfires built the Earth we cherish today, by guiding the evolution of plants and ecosystems and people. As the 400-million-year history of fire teaches us, many ecosystems need fire to survive. Rather than squelching flames indiscriminately, we must learn, once again, how to live with them.