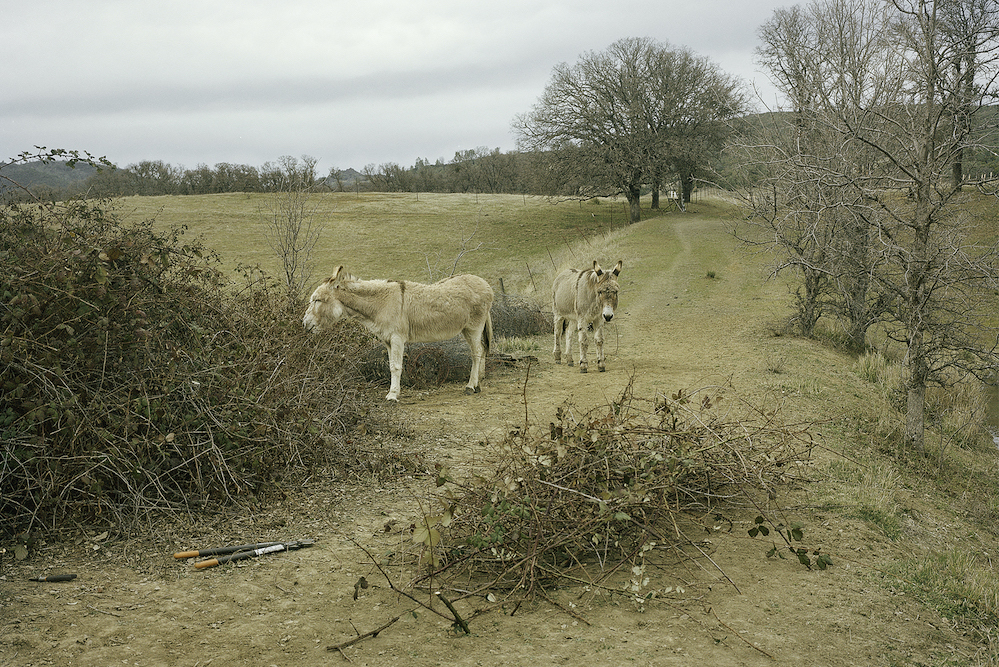 “The flowers at a donkey wedding are never for looking at – what a waste of flowers!” Photo by Young Suh.

In this story, there is a girl and there is a donkey. What good friends they are, and they began as strangers! He has taught her everything she needs to know about happiness. She has fed him handfuls of hay until he was almost satisfied. They have gainsaid the horizon together. They have decided not to run away. What do they do, now that they have reached this point? And what about us? What do we do about them?

It is right to pause on the word “friend.” There exists no other word we use with such a civilized agreement not to know what it means. In this respect, friendship resembles government.

This isn’t a love story. This story intends to refute the creation of the world.

Language is tricky. As it says in the Bible, I appeal to you on the basis of faith in things not seen.

But then again, pictures swim in our heads.

The girl and the donkey have a similarity. They have decided to marry time.

Each in their own way.

They are veiled in civilization.

I have seen over one hundred human weddings and not one of them has lacked the feeling of forestalling something. Even though a church keeps the weather outside. I saw a bride with impacted wisdom teeth walk down the aisle to a waiting ambulance, pausing at her groom.

The flowers at a donkey wedding are never for looking at – what a waste of flowers! Beauty means to eat. To other donkeys, his speech sounds sweet, he has been well fed, he has fallen asleep with flowers in his mouth.

I have heard they perform actual weddings between donkeys in India, in Turkey, to forestall disaster, to prevent or provoke a particular weather event.

The flowers at a human wedding cause great trauma. Anyone with sense doubles the price. You must be careful to not even whisper the cause of your purchase to a florist. Don’t even think it in their presence. You’d be better off going to the grocery and buying roses at the top of your lungs.

Everyone has to marry eventually, says the 19th century, says capital, says the tax-free rich. Says the judge, everyone must handcuff themselves to love.

But how long can they stand in the field like that, her arms around his neck? Her ear looking for his heart? He will get restless and uncomfortable. She will become tired of this gesture. Time will once again turn our interpretation of their pose – this flirtation with the ridiculous, converted into pity – into impatience and a bad smell. Her ear will sweat.