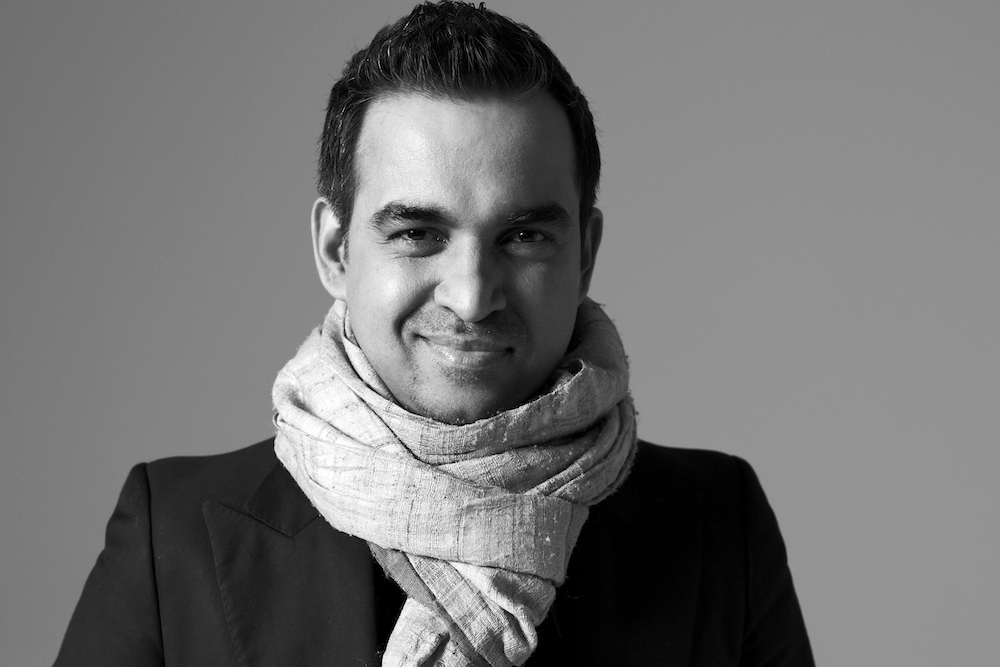 Bibhu Mohapatra is a luxury womenswear designer. Before launching his eponymous label at New York’s Fall 2009 fashion week, he was design director at J. Mendel. His designs have been embraced by First Lady Michelle Obama, Jennifer Lopez, Priyanka Chopra, and Glenn Close, among others. Before joining the Zócalo/Natural History Museum of Los Angeles County event “Does Power Dressing Have the Power to Change Politics?,” he spoke in the green room about making an unexpected cameo in a Bollywood film, how he finds creative clarity, and debuting his first dress.

I can cook up a storm of a meal for 15 people if I needed to within an hour's notice. I love to cook, and I love to travel and collect spices from all over the world, and recipes, and try to find a way to bring them into the United States without breaking major laws!

In addition to that, I love to raise chickens; I have six now, and I'm very proud of my girls.

What have you learned from raising chickens?

That sooner or later, our differences don't really matter; we’ll get over all those differences, and we'll live like a community if we have enough patience.

The reason I say that is because we have a couple of guinea hens, and we have these chickens. The guinea hens were late bloomers. Their personalities are very different; they are very shy. And the girls, the chickens, there are six of them. So they outnumbered them, and the chickens were sort of bullying them a little bit. But now after spending eight months together—you know, we're going through a pandemic; I don't know what they're going through—they just started treating each other better. So now there’s maybe two chickens and then a guinea hen right next to four more chickens; they line up like a string of pearls, but one black pearl and then white pearls. So I think they're getting along better—these are all, of course, just my theories.

When I'm away from noise then I get creative clarity. It’s a state of mind. It can be anywhere—it can be in my studio; it can be when I'm traveling, it can be when I'm walking, it could be early morning or late at night. But I need to have that space in my mind where I can focus and do justice to what inspires me.

I try not to force myself. I know it comes when I am in that state. But definitely traveling, meeting new people, hearing their stories, exploring different cultures and their craft, their food, all those things take me to a world where I can create and say something new.

Do you remember the first design you made?

My mother helped me learn how to sew on her machine and then she allowed me to use old textiles, old saris, to cut up and make things—some of them horrible things for my sister. But my sister, she made a deal with me—because they all wanted to encourage me, they didn’t want to discourage me. So she said, is it OK if I just wear these things at home? For me, I'm like, yeah, that's good enough.

One day my mother gave me some cash, and said, OK, go buy some textiles for your sister and make something for her because we had a family wedding. My mother felt that I was ready to take on that project, so she commissioned me. I made this outfit with beautiful cotton and gold thread, jacquard, and with this sort of yellow chiffon. My sister walked into the event space, and she was a head turner. I remember that. That's the first time I felt that I could create something beautiful and make someone feel confident. And also how it feels to be acknowledged for your work.

What was it like to play a cameo role opposite Bollywood megastar Amitabh Bachchan in Teen Patti (2010)?

I don't get starstruck easily, but you put [in front of me] one Bollywood movie star from ’70s, ’80s, and I will not be able to move. So this was few years ago. I was in Bombay and I had friends there who was producing a massive film, and I said, hey, can I come to the set, I want to see? The film had the big movie star Amitabh Bachchan, and Ben Kingsley—all these people. And she's like, yeah, this date, 9 a.m.

So I got there, and it's South Bombay in the beautiful colonial building on the top floor, and the temperature was literally like 110 degrees because it was a very old building, and they didn’t have AC. I thought I was there to be a fly on the wall. Well, I arrived, and then one of the ADs grabs me and throws me into one of those makeup vans. And then a man comes with a bunch of powder and starts slapping it on my face. I'm like, I think you've got the wrong guy! And then the AD comes back with a sheet with three pages, and is like no, no, no, you're actually playing yourself in the movie. You're in the film, look at the lines. I call my friend, who's still in bed—she hadn’t arrived yet. And so I sent her text, like, what's going on? I can't do this. I’m just here to see this movie star. But I was taken to the set and I had two scenes.

The first scene was fine. The second scene we were playing a card game. I'm seated next to—imagine whoever growing up or currently is the biggest movie star, whether it's Brad Pitt or Robert De Niro or Al Pacino, mix them all together and that would be Amitabh Bachchan to me. So he's sitting on my right on this round table, and my left is another one. And I'm speechless. I don't know what to say. I'm sweating. I'm completely beside myself and having a parallel conversation with my mind and thinking about my sister, my brother, what would they do if they were here? I can wait to tell them, and I'm forgetting my lines. And so the filming starts. And then he says his dialogue, and then the guy to my left, he says his dialogue, and then I go. And as I’m saying my dialogue, the camera on the tracks comes toward me. But it was so hot, so this sweat line is forming on my head and comes toward the front of my face. Imagine, in this situation, you're sitting next to Al Pacino, whoever it is, and they have to go through this thing three times because of your sweating problem!

Considering how many celebrities you work with today, it’s fun to hear you star struck. How much did celebrity culture—in Bollywood and beyond—influence you growing up?

I remember growing up in my room I had a bunch of posters. I had a massive poster of George Michael and Andrew Ridgeley from WHAM. I had a massive poster of Marilyn Monroe in that gold V-neck dress because I loved that photograph. And then I had a picture of Audrey Hepburn. Then I had a life-size black-and-white poster of Albert Einstein on the door. So it was like all these individuals, they had something—they brought something to me. When I grew older, I started paying attention to the artistry behind films and the acting. Of course, Audrey Hepburn, Katharine Hepburn, they were style icons too.

And then in Bollywood, I'm still obsessed with this actress, whose name was Parveen Babi. She was very big in the late ’70s, early ’80s—she was the modern Indian woman. I'm friends with one of her nephews, so I knew where she lived, and every time I would go to Bombay, my driver, since he knows, would ask me, should we stop? Meaning that I’d stop in front of a house for like two minutes, thinking that she will be walking her dog or something, and I’d see her…

At the end, it becomes about creative minds and the craft that they adopted and practiced. That's what matters to me, you know, whether it's film, whether it's fashion, whether it's writing, it's what kind of mind they have and how they played with their craft.

What’s one ordinary thing you're most looking forward to doing when the pandemic ends?

Just be able to have friends over inside or outside of the house and be able to give someone a hug and shake their hands again and be in their proximity—reduce that six feet of distance.