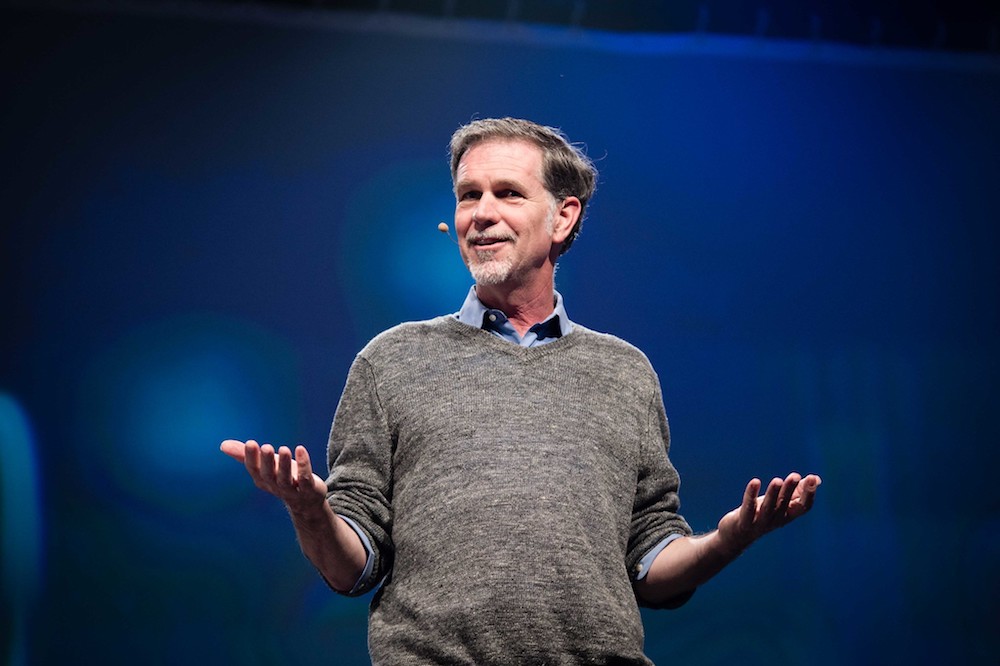 California's education system might look very different today if Netflix co-founder and CEO, Reed Hastings, had been reappointed as the president of California's State Board of Education in 2005. Courtesy of re:publica/flickr.

After long days supervising my children in their struggles with the miseries of distance learning and hybrid school, I try to relax by watching Netflix. As I do, I often find myself thinking about a state legislative hearing from 2005, and how different California education might be if it had gone differently.

The hearing, in a committee of the State Senate, was supposed to be routine. I, an L.A. Times reporter at the time, didn’t even bother to cover it. The subject was reappointment of the president of the State Board of Education. The president, Reed Hastings, was thought to be a shoo-in.

After all, Hastings, a tech entrepreneur and Democratic donor from Santa Cruz, had put together a successful ballot measure to make it easier to pass school bonds, launching a new era of school construction statewide after decades of neglect. He’d supported the state’s accountability system for schools, and backed the establishment of public charter schools in disadvantaged neighborhoods. Hastings also had bipartisan support—he’d been appointed four years earlier by a Democrat, Gov. Gray Davis, and was nominated for re-appointment by Gov. Arnold Schwarzenegger, a Republican.

But the hearing went sideways. Some education groups didn’t like charter schools, or his blunt interest in transforming education systems. Hastings himself suggested that he was felled by criticism from bilingual educators after he pushed for more instruction time in English for English-language learners. Ultimately, two members voted to re-appoint him, and two voted against. A fifth legislator, a Democrat named Debra Bowen, who would soon be elected Secretary of State, abstained. At 2-2, his reappointment was effectively blocked.

This unexpected political assassination made a few headlines, but soon faded from view. Hastings vowed to continue his educational work but didn’t fight back (“I lacked political deftness,” he later said of the episode). After all, he still had his day job running the DVD subscription service he’d co-founded years earlier. It was called Netflix.

With our school systems melting down and with Netflix now one of our state’s most powerful and creative entertainment forces, it’s worth asking what would have happened if this Battle of Hastings had gone a different way.

In retrospect, 2005—and that rejection of one of California’s richest and most effective Democratic supporters of school reforms—looks like the beginning of an ill-conceived retrenchment in California’s educational ambitions.

Over the past 15 years, state leaders, and the teachers’ unions who elect them, turned hard against educational reforms—saying they wanted to focus on regular public schools. They obsessively opposed public charter schools and specialized programs, put obstacles in the way of online education and technological alternatives to the classroom, and dismissed anyone who dared pursue educational innovation as a tool of billionaires.

In retrospect, 2005—and that rejection of one of California’s richest and most effective Democratic supporters of school reforms—looks like the beginning of an ill-conceived retrenchment in California’s educational ambitions.

The state also junked the testing-based accountability system that gave parents and communities clear guidance on how their schools were doing—replacing it with a confounding color-coded system of measures designed to obscure our students’ academic stagnation. And, cynically, Gov. Jerry Brown created a new funding formula to help poor schools—only to admit that he had given up on the goal of closing racial and economic disparities in student performance.

While Gov. Davis, Hastings, and others once worked to make it easier to build public schools, today’s California is busy closing schools, in part because of rapidly declining enrollments. The state boosted school funding during the 2010s, but the new money has been gobbled up by retirement benefits, not students. And promises to support school-age children more comprehensively—in areas from child care to health care—have not been followed by action.

As California education has gone backward, Hastings has been propelling Netflix forward. After becoming dominant in DVD rentals, Netflix survived a bumpy transition to streaming video to become a global giant, with more than 200 million subscribers. The company isn’t just popular or well-run; its shows, from The Crown to Ozark to Orange Is the New Black, are smart and at the cultural cutting edge. Netflix leads all other companies in nominations at this month’s Oscars.

During these past 15 years, Hastings has remained involved in education, but as a philanthropic outsider. He backed the charter schools and technological innovations in education that the state of California was trying to make harder to pursue. He supported the Rocketship schools, charters which tried (and sometimes failed) to grow fast and integrate technology, as well as the online Khan Academy and DreamBox Learning, which develops online math lessons.

These efforts drew extensive criticism and controversy. So did his public statements arguing that elected school boards, and the politics and turnover they bring, were preventing schools from achieving the stable management necessary for educational improvement. He argued that streaming technologies and data collection could make education more personal and effective for kids around the world. And in California, he kept giving money to progressive ballot measure campaigns (including those to end the death penalty and reduce sentences for non-violent crimes) and to Democratic candidates who fought for school reform (and usually lost to union-backed opponents).

For all his trouble, he was frequently dismissed, by unions and media (including, on occasion, your columnist), as another billionaire pursuing tech-centric, quasi-private educational reforms that wouldn’t serve all students.

Then the pandemic hit.

When California schools shut down, they didn’t have their own online platforms. The only things that worked were the online tech systems like the ones that Hastings had funded; California teachers used videos from the Khan Academy, and my own kids’ teachers had them doing all their math on DreamBox.

Teachers, schools, and their districts lost track of many of their neediest students; California had never really built the extensive data systems that Hastings and other education reformers had advocated. Instruction time was cut drastically, putting English language learners and special ed students further behind. Parents, feeling abandoned by closed and unresponsive neighborhood schools, went desperately searching for alternative educational arrangements—of the kind Hastings had supported.

The pandemic exposed just how weak and broken the educational system had become. Without a real system of accountability like the one California had junked, we can only guess how much learning children have lost. Local school districts were exposed as powerless to reopen their schools. And in recent months, San Francisco began a relentless campaign to prove, all by itself, that Hastings had been right to dismiss local school boards as pointless.

Silicon Valley hasn’t invented a time machine, so we’ll never know what would have happened if we went back to 2005 and reversed that decision to cast off Hastings and so much of what he represented. But the state does have the power to change what it does going forward.

The state must transform schools, and not just to help today’s students recover from pandemic learning loss. Our students must be better educated and more technologically adept, and the achievement gap must be closed. Parents need more choices that fit their children. And our schools themselves must be made safer, so they can remain open no matter what new disasters or emergencies that 21st-century California throws at them.

If it’s going to achieve such transformations, California needs to bring its most creative and ambitious people back inside the educational system.