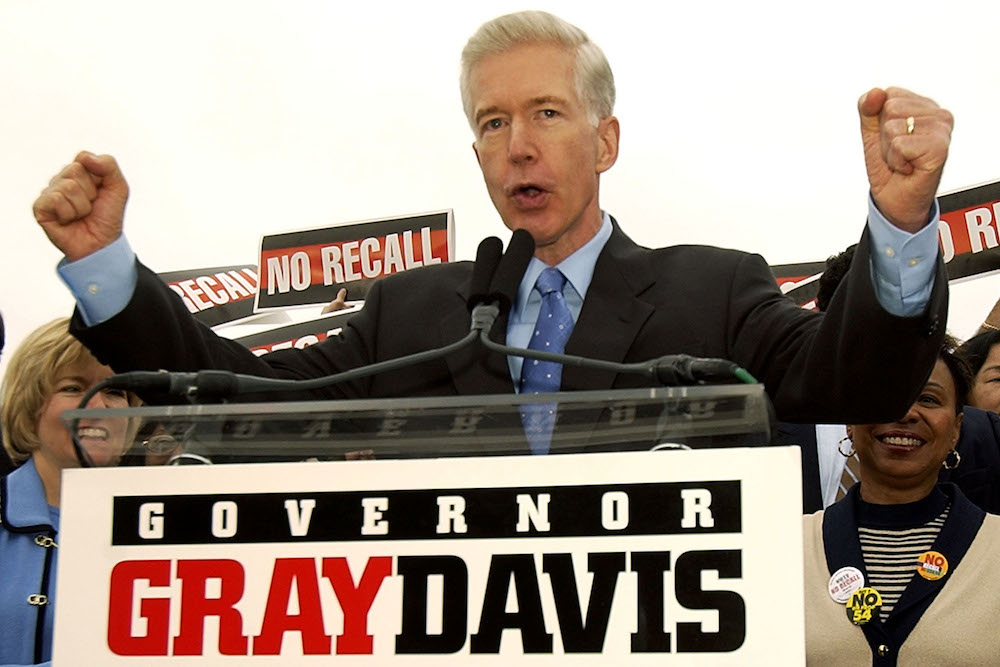 The secret to the recall puzzle is a guy named Gray. Courtesy of Kevork Djansezian/Associated Press.

The most head-scratching political puzzle in California has only one solution:

It is, of all people, Gray Davis.

Yes, perhaps paradoxically, Gray Davis, the former governor who voters recalled in 2003, may be the most important ally Gavin Newsom and California’s ruling Democrats have in defeating this year’s recall.

On Election Day this fall, voters will face two questions. First, they must choose, yes or no, whether to remove Newsom from office. Then, they will have the option to vote for one person from a list of candidates who would replace him.

The conundrum facing Democrats is whether they would be better off preventing anyone from within their ranks from running to replace Newsom, or whether the party should place one prominent Democrat on the ballot.

There are strong arguments on both sides. Newsom himself, House Speaker Nancy Pelosi, and most of the Democratic establishment don’t want a Democratic alternative. They argue that fielding an attractive Democratic candidate would give more Democratic voters permission to vote to recall the governor. They want to keep the Democratic base firmly behind the governor, and offer the voters a stark choice: support Newsom, or risk turning the governorship over to one of several pro-Trump Republicans who are running in the replacement race.

But other Democrats—notably former San Francisco Mayor Willie Brown, a Newsom mentor—say that’s reckless. They think the Democrats should rally behind an alternative of their own, which could keep the governor’s office in Democratic hands if Newsom is recalled. Without such a back-up in place, one of those Trump-backing GOP contenders—part of a Republican party that has turned hard against democracy itself—could end up as our next governor, at least until the November 2022 elections.

But what if there were another way—or rather, a way to have it both ways? What if Democrats could find the perfect replacement candidate?

That candidate is not an ambitious Democratic politician like former L.A. Mayor Antonio Villaraigosa, or 2020 presidential candidate Tom Steyer—too many Democrats might prefer one of them over the incumbent Newsom, making the recall a contest between different factions of Democrats. Gov. Newsom and the Democratic establishment are correct in arguing that to beat the recall, they need party unity.

Perhaps paradoxically, Gray Davis, the former governor who voters recalled in 2003, may be the most important ally Gavin Newsom and California’s ruling Democrats have in defeating this year’s recall.

What the Democrats need is to offer up a candidate with no political future, a back-up candidate whose opposition to the recall, and support for Gov. Newsom, would be unquestioned.

What if the Democrats called on Gray Davis?

Davis is 78 years old. He’s not charismatic or popular. Best of all for Democrats, his very presence on the ballot would reinforce opposition to the recall.

Davis bitterly fought his own recall in 2003. He knows, better than anyone, the defects of the process. And Davis, who has worked on governance reform efforts since leaving office, could remind voters that recalls actually don’t change that much in California. This is a state where most government decisions are locked in place by budget formulas, ballot initiatives, the constitution, and powerful interest groups.

To illustrate the absurdity of using recalls to force dramatic change, Davis could point to the fact that his successor, Arnold Schwarzenegger, relied on Davis’ own aides and doubled down on many of Davis’ own policies. Davis could recount how he and Schwarzenegger have become close friends, with Davis a frequent presence at Schwarzenegger’s institute at USC. The two men even saw each other over a recent Christmas.

Davis has been among those who oppose putting a replacement candidate on the ballot—which reinforces the fact that he would be the perfect replacement. He could campaign with Newsom, whose efforts the former governor has relentlessly praised. Indeed, Davis, by taking on all questions about the recall itself, could reinforce Newsom’s strategy of focusing on his job as governor, and what he can do for Californians. On recall matters, Davis already has been a media surrogate for Newsom on local TV around the state; in an appearance on KABC in Los Angeles, Davis even lapsed into referring to Newsom and himself as “we.”

In other words, Davis would join the ballot as a clear member of team Newsom, thus satisfying the strategic imperatives of both sides of this puzzle. Davis would keep up the attack on the recall while keeping it separate from Newsom, who can focus on bigger, more urgent issues. And Davis’ presence would provide a unifying Democratic insurance policy in case Newsom can’t get a majority to vote to retain him in office.

Gray Davis couldn’t save his own governorship. But he’s the perfect person to save Newsom’s.