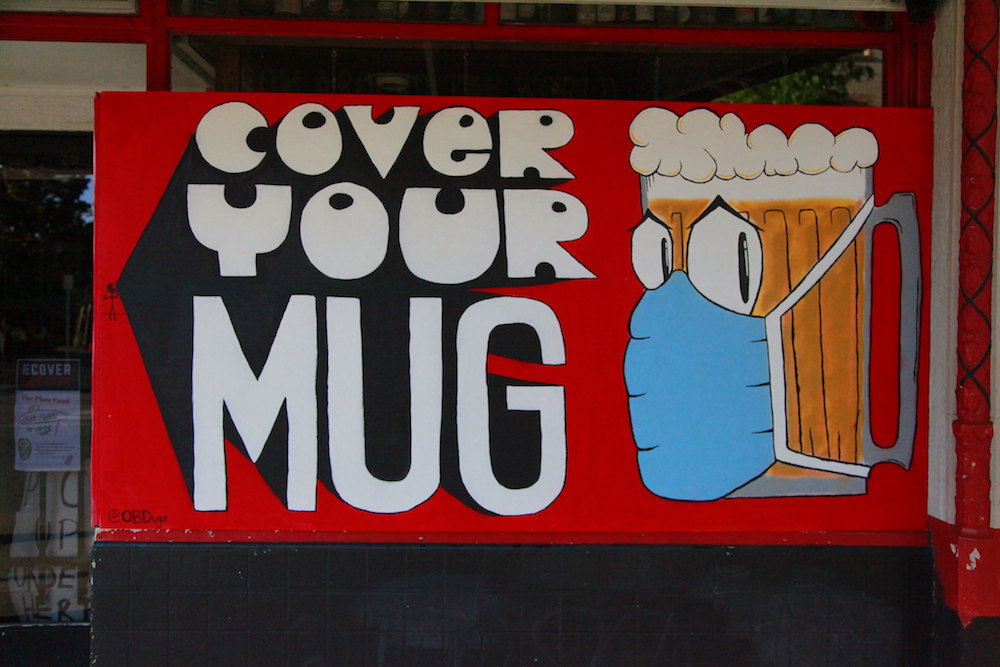 Artist mural in Seattle, Washington. The state of Washington, with greater than average COVID-19 restrictions, performed better economically than the U.S. as a whole. Courtesy of Seattle Channel/flickr (CC BY-NC 2.0).

In April 2020, with the pandemic in full swing, the Economist published: “A Grim Calculus: COVID-19 presents stark choices between life, death and the economy.” Soon Americans were blaming the lockdowns for recession and, in the words of Florida Governor Ron DeSantis, “the destruction of millions of lives across America… without any corresponding benefit in COVID mortality.” Before the end of the year, some states, notably Texas, were ending COVID restrictions with the goal of improving their economic activity.

Now that 2020 is mercifully in the past, we have data (from the U.S. Bureau of Economic Analysis) to evaluate the “grim calculus” in each state. And looking at that data—especially for large states, which have more diversified economies—the results may surprise. It’s hard to find any real trade-off between COVID lockdowns and decreased economic activity.

If anything, we find the opposite.

First, let’s step back and look at larger state data. Of those states that performed better economically than the U.S. as a whole in 2020, the state of Washington, with greater than average COVID restrictions, took first place. Then came three less COVID-stringent states—Arizona, Colorado and Georgia—followed by three more stringent states—North Carolina, Maryland, and Virginia.

Then, in eighth place, came California, one of the most stringent states. After California, only three other states outperformed the country economically—Texas, Indiana, and Florida, all less stringent. Across these 11 states it is hard to find a trade-off; states with more COVID restrictions did well economically and those with fewer restrictions also did well.

And if we look beyond those 11 states to all states, we find a striking pattern: States with more stringent interventions had on average better economic outcomes and better health outcomes.

Is this just a statistical anomaly? The answer seems to be no. One reason to be confident of the result is to look at other countries. Consider, for example, Sweden, well-known for having few stringent COVID measures. In 2020, Sweden had worse health outcomes than the similar Scandinavian countries of Denmark, Norway, and Finland. At the same time, its economic outcomes during the pandemic were no better than any of its healthier neighbors.

The finding also fits with history. A 2008 Federal Reserve Bank of St. Louis survey of the 1918 influenza pandemic found that St. Louis, which took the flu more seriously and opened up later, had better economic and health outcomes than Philadelphia, a city that opened up sooner.

States with more stringent interventions had on average better economic outcomes and better health outcomes. Is this just a statistical anomaly? The answer seems to be no.

Similarly, 2020 research into the 1918 pandemic found that cities with more stringent interventions had better employment gains and better health outcomes.

What explains this seemingly strange but persistent result? The power of government signaling.

When a state indicates through policy and pronouncements that it takes the pandemic seriously enough to impose measures (sometimes extreme) to control the spread of the disease and protect public health, it is sending a message to its citizens. Part of that message is about businesses. The state is saying that there are protocols in place to make open businesses as safe as possible, and were that not possible, the businesses would be closed.

But when a state indicates through policy, as Sweden did, that individuals should make a choice as to what they do during a pandemic and that the government will not choose for them, it sends a different signal. It is saying, “Citizens, you are on your own, choose wisely.” So, while an open business will be busier than a closed one, the open businesses are likely to do better in a place with more stringent restrictions.

Does this show up in data? Yes, in some ways. Using OpenTable’s data for the pandemic, a decline in the number of diners was more dramatic for restaurants and bars in California than Texas. However, for those individual businesses were open, hours worked by employees fell by only 1.5 percent in California versus an 8.9 percent decline in Texas. But this is simply cherry picking two states. The decline in the number of diners in Minnesota, Massachusetts, and Ohio was comparable to that in Florida, Georgia, and Missouri even though the former were closer to California in restrictions and the latter closer to the Swedish approach.

The retail sector data paint a similar picture. For the same large states mentioned above, there is no significant correlation between changes in retail sales and the stringency of COVID interventions. A similar analysis of retail purchases by type of store also shows no correlation between interventions and the volume of sales. And, for the smallest 10 states, the same result holds true. People headed to online platforms to purchase goods at about the same rate regardless of the stringency of interventions.

The bottom line is that people respond to the information they have and the signals they receive from their government. Clearly, business closures increase unemployment in affected sectors. But there is no evidence to suggest that closures and other public health interventions have led to worse economic outcomes. So, the trade-off, such as it is, must be between sectors directly impacted by interventions and, in states and countries with fewer interventions, voluntary lower demand and more work absenteeism due to higher overall infection rates.