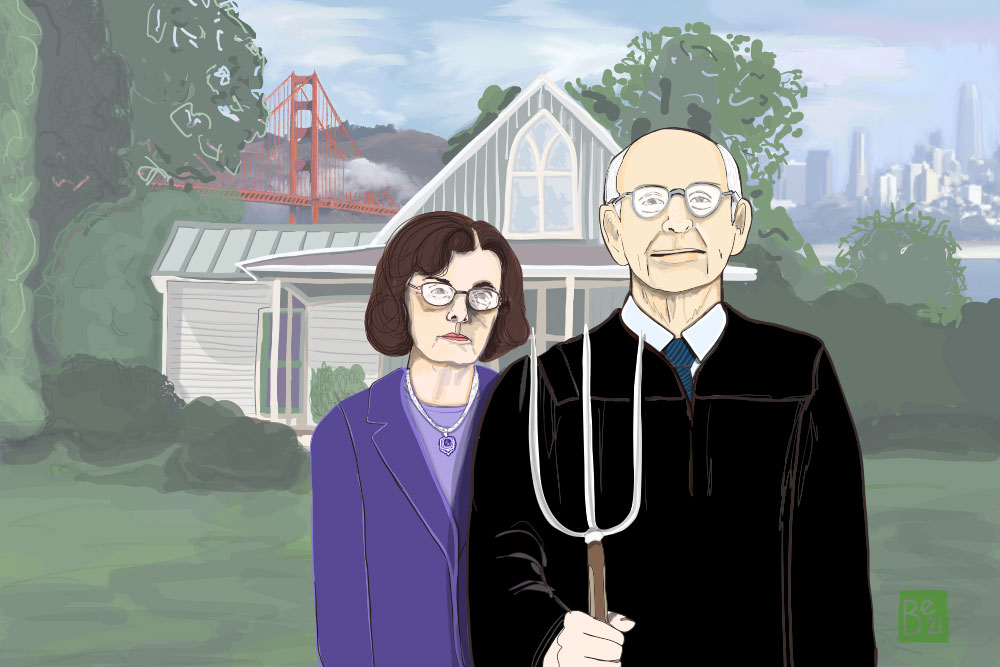 The 88-year-old Feinstein, by not quitting while Gov. Gavin Newsom remains in office, could end up being replaced by a Trump-loving Republican. If Newsom is recalled and Feinstein dies or becomes incapacitated in the next year, during a Larry Elder governorship, the Senate would flip back to Republicans. The 83-year-old Breyer, by not retiring while President Joe Biden could nominate a replacement who could be confirmed by a Democrat-controlled Senate, risks having his seat go to another right-wing justice.

Why do Feinstein and Breyer cling to power, despite the risks? The conventional wisdom chalks their stubbornness up to their age and diminishing cognition.

But I don’t buy into such ageism. Instead, I see their political pig-headedness, their refusal to acknowledge present-day realities, and their unwillingness to cede power as rooted in their shared hometown, San Francisco.

Is there any human settlement on this godforsaken earth more stubborn than San Francisco? Even in California, where going your own way is the leading religion, San Francisco proudly defies conformity and good sense with politics, culture, and ideas that leave us scratching our heads. “Forty-nine square miles, surrounded by reality,” is how native son Paul Kantner, of Jefferson Airplane, fondly described his hometown.

Even in California, where going your own way is the leading religion, San Francisco proudly defies conformity and good sense with politics, culture, and ideas that leave us scratching our heads. “Forty-nine square miles, surrounded by reality,” is how native son Paul Kantner, of Jefferson Airplane, fondly described his hometown.

Of course, San Francisco owes its existence to its stubbornness—it’s the rare global city to be thoroughly destroyed (by earthquake and fire in 1906) and to rebuild itself. Stubbornness remains a requirement of daily survival. While other Californians are routinely warmed by the sun, San Franciscans, isolated on a cold peninsula, must rely on their inner fire. You need a stiff spine to walk upright in those wind gusts. And in our era, just finding a place to live, and affording San Francisco rent, requires an iron will and a commitment to the city. (I refer you to the lead character’s magical, stubborn act of squatting in the 2019 film The Last Black Man in San Francisco if you’re wondering whether or not I’m exaggerating.)

So, how can we expect Feinstein or Breyer to know when to quit when they are from a place where just getting around town means there’s always another hill—Telegraph, Nob, Russian—to climb?

Both the senator and the justice come by their San Francisco stubbornness honestly. Feinstein, who is Jewish, was hardened first by the stubborn and demanding nuns at Convent of the Sacred Heart High School—and then, as a supervisor and mayor, by the city’s brutal, tribal, and quite male 1970s and ’80s politics. Breyer got a taste of those politics through his father—who was legal counsel to the board of education—and developed his talent for arguing as a debater at Lowell High. Both Feinstein and Breyer only went as far as Stanford for college.

Feinstein and Breyer also embody the local combination of privilege and self-righteousness that can make the place and its people so infuriating. Even now, with their city boasting unsurpassed beauty, epic wealth, and unrivaled cultural power, San Franciscans, including these two powerful people, still talk as if they are outsiders and underdogs.

Feinstein has fashioned an image as an independent-minded voice of reason. She prides herself on her willingness to collaborate with Republicans, and to fight with her fellow Democrats. Breyer portrays himself, in books and speeches, as a man of law and duty, unmoved by politics. Meanwhile, he sits on a high court that has been remaking our politics for decades.

The way that Feinstein and Breyer hold to such obtuse and outdated outlooks is itself very San Francisco. “People don’t grow up, they grow old,” the late, great San Francisco Chronicle columnist Herb Caen wrote. “One fateful way to counteract that is to live in the past, the occupational hazard of San Franciscans.”

Caen’s old warning points to a current irony: defiance of reality has never been more popular across the United States. So, is it any wonder—in our polarized and angry age—that the rest of the country has come to prize the brand of stubbornness nurtured by San Francisco? Americans elevated the most stubborn California politician of the younger generation, former San Francisco district attorney Kamala Harris, to the vice presidency, backing up a 78-year-old president. The proudly obstinate San Franciscan Nancy Pelosi, at 81, is widely considered indispensable as Speaker of the House.

In the past decade, Californians, improbably, reinstalled that stubborn old coot Jerry Brown in the governorship, and they made former San Francisco Mayor Gavin Newsom, running on a platform of resistance to national political norms, Brown’s successor. Newsom is now trying to defeat a recall with a stubborn strategy of calling the vote illegitimate and telling people not to even bother voting on the question of who might succeed him if he’s recalled.

A San Franciscan, State Senator Scott Wiener, has become the most important lawmaker of this era, by stubbornly pursuing new housing construction that the rest of California loathes. And at age 87, Mr. San Francisco, Willie Brown, remains a political kingmaker, and behaves as if he is still his city’s mayor—17 years after he left office.

The attempt to recall Newsom is mostly grounded in misinformation and right-wing fantasy, but it does respond to a very real California frustration with the San Francisco political machine and its stubborn self-regard, even as the state is consumed by multiple crises.

I recently called one of my favorite San Franciscans, Quentin Kopp, a former judge and legislator who even San Franciscans think is too stubborn. When I asked him whether San Franciscans are more stubborn than the rest of us, he immediately answered, “Yes”—and then stubbornly deflected my questions on the roots of that stubbornness.

Kopp, who is 93, still swims every day and goes to his law office, where he represents clients that include a group of judges in their 70s and 80s who have been shut out of judicial assignments by the California Supreme Court. He says he has no intention of retiring.

When I asked about Breyer and Feinstein, he was adamant that both should stick around. Term limits for politicians have been a failure, he argued. And Breyer, as a judge, should not make political decisions about anything, including retirement. As for Feinstein, Kopp said he had just conveyed to a top senatorial aide that she shouldn’t bend to critics who see signs of diminished capacity or senility. To suggest a person quit because of age, Kopp said, “is insulting and regressive.”

The message from the City by the Bay is clear, America: if you’re waiting for stubborn San Franciscans to relent to outside pressure to retire, don’t hold your breath.