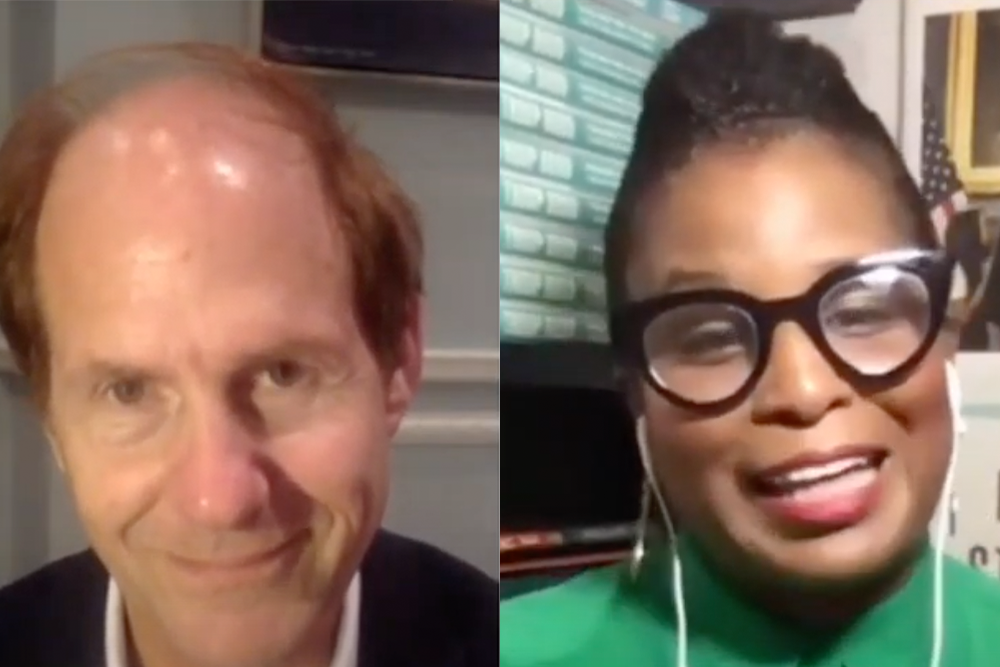 Cass R. Sunstein has thought a great deal about sludge. No, not the wastewater treatment byproduct, but the “yucky stuff” we are all doomed to encounter in our daily lives, whether it’s waiting on hold to change a phone plan or sifting through the paperwork to find a healthcare provider.

Sludge—which is also the title of Sunstein’s most recent book, Sludge: What Stops Us from Getting Things Done and What to Do about It—is at best a nuisance. But at worst, the legal scholar explained during last night’s virtual Zócalo/Pacific Council on International Policy event, “How Could Less Red Tape Make Societies More Equal?,” sludge can prevent the neediest of us from accessing essential resources.

How long have you been reckoning with sludge, asked New York Times assistant metro editor Nikita Stewart, the evening’s moderator, and the author of Troop 6000: The Girl Scout Troop That Began in a Shelter and Inspired the World.

Ever since the Obama Administration, said Sunstein, who is currently a senior counselor in President Biden’s Department of Homeland Security. From 2009­­–2012, he served as administrator of the Office of Information and Regulatory Affairs (OIRA), which was created by the Paperwork Reduction Act. “I didn’t get on that problem fast enough or aggressively enough,” Sunstein said of the paperwork OIRA was supported to reduce. “The office has a lot of opportunity to tell the Department of Transportation, the EPA, the Department of Health and Human Services to stop imposing such paperwork burdens on people—to back off.” He called his book “a kind of redemption effort” to help sludge’s victims and its perpetrators.

“There’s been a lot of creativity and sludge removal because public health demands it,” Sunstein said.

Sludge’s burdens cause real harm, Stewart said, something she witnessed firsthand while covering food pantries and poverty for the Times. “What was upsetting me—and it still upsets me—is how bureaucracy strips people of their dignity and their time. You can’t get time back,” she said.

“That’s a central goal of the book—to see sludge as a kind of force that traps people in poverty,” said Sunstein. People with resources have the time to navigate sludge—or the money to hire others to do so. “But if you’re poor, there are two things that make it worse,” said Sunstein. “One is, you may not have a lot of time, because you’re struggling to make ends meet. It may be that you’re dealing with a child’s or a parent’s pressing need. And if the government tells you just fill out a four-page form, you might think, ‘I don’t really have the time for that.’ And besides, you might think, ‘I might get in trouble if I say something wrong,’” which is not unfounded. These barriers then prevent low-income families from “what was supposed to be a simple journey to get something you have a legal right to,” Sunstein said—including job training, education, and financial support.

Take, for example, the earned-income tax credit. “That’s a program that helps poor people and poor children not only survive economically. It helps them with respect to their health, and helps their kids’ educational prospects many years later,” said Sunstein. But sludge keeps many eligible people from receiving it, he pointed out, which makes “this fantastic program much less fantastic than it should be.”

So, asked Stewart: Is sludge ever necessary?

The pandemic has revealed some of the problems sludge causes, however. “Vaccination sludge is a big problem,” said Sunstein, as are unnecessary in-person doctor’s office visits and screenings. “There’s been a lot of creativity and sludge removal because public health demands it,” Sunstein said. Of course, there’s always some tradeoff to reducing sludge—in this case, he said, there may be some increased fraud. However, he argued, “if we can develop a vaccine and put a person on the moon, maybe we can make our online receipt system sufficiently fraud-proof.”

Audience questions for Sunstein flowed in from the YouTube live chat. One person wanted to know how sludgy the United States is.

“The number of hours of paperwork burdens imposed by the U.S. government on the American people is 11 billion,” Sunstein said. But he is hopeful that this number will go down, as juxtaposed against the pandemic, the amount of form-filling that’s currently being asked for looks even more absurd. No one, he said, has time to fill out a 70-plus question form. To further understand and mitigate the hours lost to sludge, he called for state and local officials, as well as various institutions, to undertake their own “sludge audits.”

Another audience member wanted to know how technology can help reduce the amount of sludge.

Putting paper forms online, if done right, can simplify the process, Sunstein answered. “If there are questions that are relevant to you, you can just say that and then [the online form will] skip 10 [questions that don’t apply to you].” However, he cautioned, internet access is its own barrier, and for people to successfully navigate a website, it’s crucial to make its design accessible.

Before the conversation closed, Stewart asked Sunstein to reflect on what he most wants readers to come away with after reading Sludge.

“What’s the most precious thing that human beings have? What’s the one thing that we’re luckiest to have? I think it’s a four-letter word, and it’s time,” Sunstein said. “Let’s find, shall we, more ways to give other people more of it.” 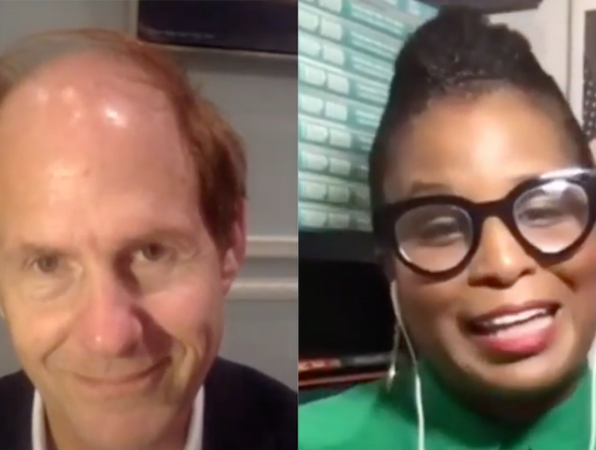 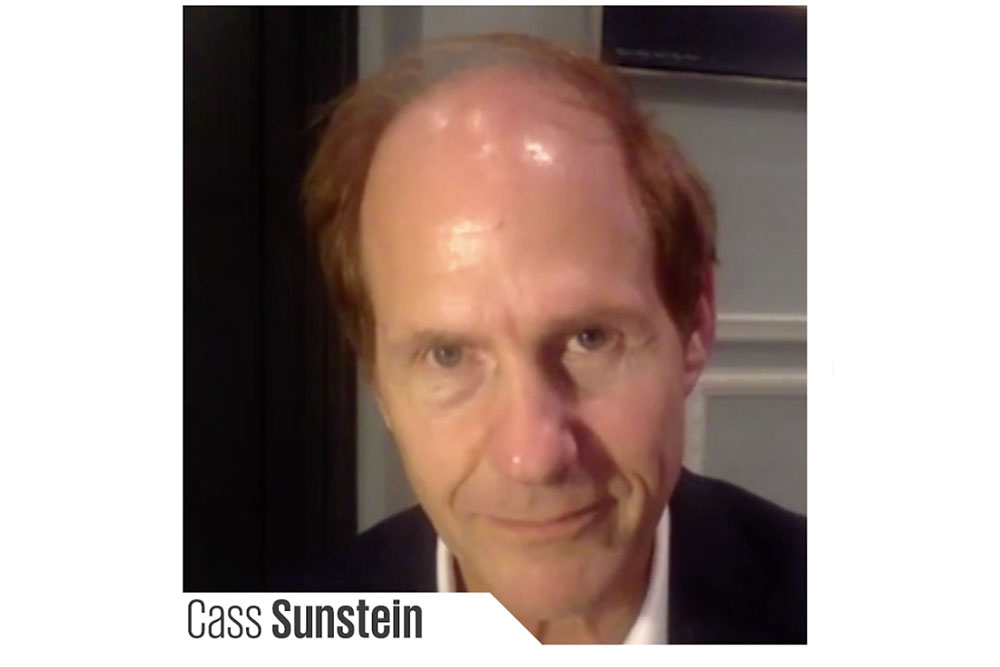 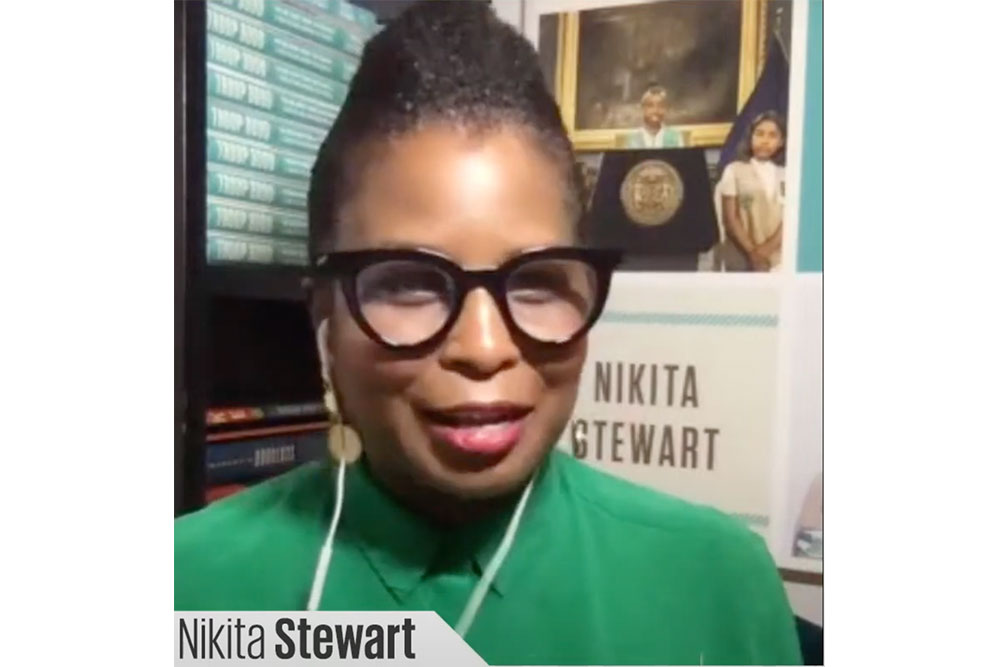