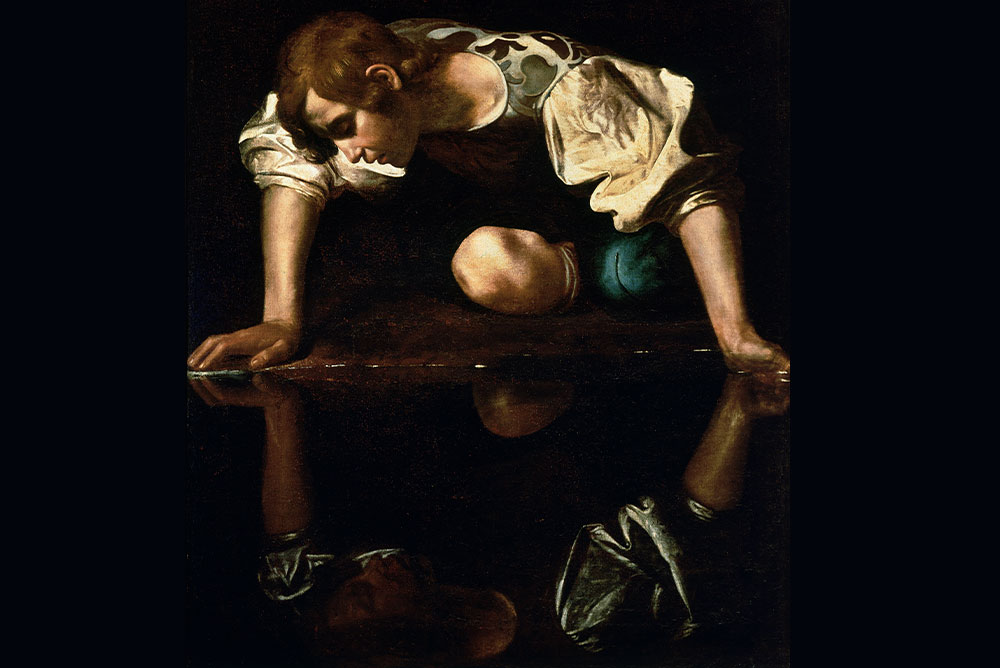 Narcissus by Caravaggio, painted circa 1597–1599. Courtesy of Wikimedia Commons.

Tens of millions of people, myself included, watched last month as multiple strangers pieced together in real time the fact that they’d all been led on and ghosted by the same tall, 20-something guy in New York City.

The saga, which involved effusive wooing, a curated Spotify playlist, and of course, the cold exit (not to mention at least one allegation of an unsolicited explicit pic), proved to be just the kind of catnip that can scorch-earth its way through social media.

By the time #WestElmCaleb—so named for the place of work listed on his dating profile— played out on TikTok, no one came out unscathed. The original West Elm Caleb’s identity was repeatedly doxxed. Localized efforts to name and shame the West Elm Calebs of other zip codes took off. And brands, from Ruggable to Matel, jumped into the fray like vultures to a carcass to pick at what was left.

Dubbed “2022’s most embarrassing witch hunt,” the level of engagement around West Elm Caleb was perhaps its most puzzling dimension. Did everyone just hear about dating in the year 2022?

But from Caleb’s original sin, love bombing—one person showering another with grand romantic gestures just out of the gate in order to manipulate them—to the TikTok mob that emerged, narcissism offers a through line. As a well-timed New York Times explainer noted, the phenomenon of love bombing is a red flag that you’re dating a narcissist. (And if you’re gleefully filming front-facing videos in full makeup as part of a vicious pile on, that’s maybe also an indicator.)

Studies have shown that less than 5.3 percent of the general population actually has narcissistic personality disorder—which itself continues to be a controversial diagnosis. At one point, the American Psychiatric Association considered dropping it from the Diagnostic and Statistical Manual of Mental Disorders entirely. Yet the term “narcissism” continues to be a buzzword of our times.

Coronated into popular culture in the 1970s by social critics like Christopher Lasch, who latched onto it as a sign of national decay, narcissism has captured the American imagination like no other over the last half century. The word has continued to be melted down and repurposed into a catch-all insult about self-absorption and vanity. In our social media age, that often takes the form of a hand-wavey article every few months or so proclaiming that this latest generation is the most narcissistic yet (not true), or that the internet has made narcissists of us all (well, maybe).

Coronated into popular culture in the 1970s by social critics like Christopher Lasch, who latched onto it as a sign of national decay, narcissism has captured the American imagination like no other over the last half century.

Narcissism, of course, dates back all the way to its foundational myth, famously immortalized by the Roman poet Ovid. Ovid spun the tale of a handsome young hunter, Narcissus, who is prophesized to live a long life, so long as he never recognizes himself. When Narcissus spurns the affections of a nymph named Echo, she becomes overcome by grief, fading away until just her voice is left. Watching this, Nemesis, the goddess of revenge, decides to punish Narcissus and lures him to a pool where he fatefully peers upon his reflection for the first time. Transfixed by his beauty, Narcissus falls in love with his own self-image. Ovid’s version, published in Metamorphoses in 8 CE, ends in heartbreak: Narcissus realizes he can never be with his own reflection and like Echo, he too withers away, ultimately transforming into the Narcissus flower.

But that narrative isn’t the earliest known telling of the myth. Only a few years ago, that version—a darker story that ends in suicide—was found in the Oxyrhynchus papyri trove, the largest collection of ancient writings in the world, so named for the location in Egypt where they were discovered a little over 100 years ago.

Oxford classicist Benjamin Henry, who transcribed and translated the fragment, believes it was written down in the mid-1st century BCE by Parthenius of Nicaea, who was known for recording obscure stories of love. Parthenius’s Narcissus doesn’t involve Echo, but rather male suitors, whose affections Narcissus also spurns in favor of his own reflection.

The myth wasn’t intended as a cautionary tale around vanity. Rather the narrative, which likely originated in the Hellenistic age, as early as the 3rd century BCE, was probably used to explain why a particular god was worshiped in a particular place—in this case to encourage the local population to honor Vera, the god of love, more reverently. “Whether it was supposed to shed any light on psychology or any such thing is rather unclear,” Henry told me.

Had Ovid not revamped the tale, Narcissus may have ended up just an obscure local story. “It’s really Ovid’s retelling and ingenious rhetorical speeches that he gives to Narcissus and Echo that made the myth popular,” Henry explained.

It’s worth remembering that there are actually several early versions of the Narcissus story out there. Another version, by an unknown author, even creates a backstory where Narcissus is in love with a sister, who dies at a young age. In this telling, Narcissus consoles himself with his watery visage, which resembles hers—casting his self-absorption in a more sympathetic light.

This more nuanced interpretation of Narcissus is more in keeping with the way the psychological condition was first characterized by Freud in his influential 1914 paper “On Narcissism.” Freud borrowed the term from Havelock Ellis, the founder of modern sexology (and a eugenicist) and German psychiatrist Paul Näcke. Ellis first linked the idea of excessive self-love to the Greek myth by using the phrase “Narcissus-like” in 1898, and Näcke added on an -ism to it the following year, to characterize self-absorption around sexual emotion. Freud took this and established the concept of narcissism as we understand it today.

Notably, Freud’s paper breaks narcissism into two parts. Primary narcissism, he argued, is a part of everyone’s psychological makeup. “Loving oneself,” he wrote, is the “libidinal complement to the egoism of the instinct of self-preservation.” He linked secondary narcissism, by contrast, to megalomania, a form of delusional grandiosity.

Today, there’s been something of a renaissance of scholarship around narcissism that adds even more dimension to the concept. “Two Faces of Narcissism,” a classic paper published over three decades ago, breaks narcissism into two subcategories—grandiose and vulnerable—the former characterized by “extraversion, aggressiveness, self-assuredness, and the need to be admired by others,” and the latter by “introversion, hypersensitivity, defensiveness, anxiety, and vulnerability.” Today it’s well established that narcissism lies across a spectrum—and that healthy narcissism can be a natural state for everyone.

One of the clinical psychologists leading this charge is Craig Malkin, whose 2015 book Rethinking Narcissism begins with an anecdote about his own mother, crediting her “warmth, optimism, and activism” to the conviction that she was special, and therefore could affect change in the world. Narcissistic behavior, Malkin posits, isn’t just for “arrogant jerks or sociopaths.”

So this Valentine’s Day, perhaps we should get comfortable with the idea that there’s a narcissist in us all. That said, should anyone send you a customized Spotify playlist featuring LCD Soundsystem and Angel Olsen, you have my permission to unmatch.