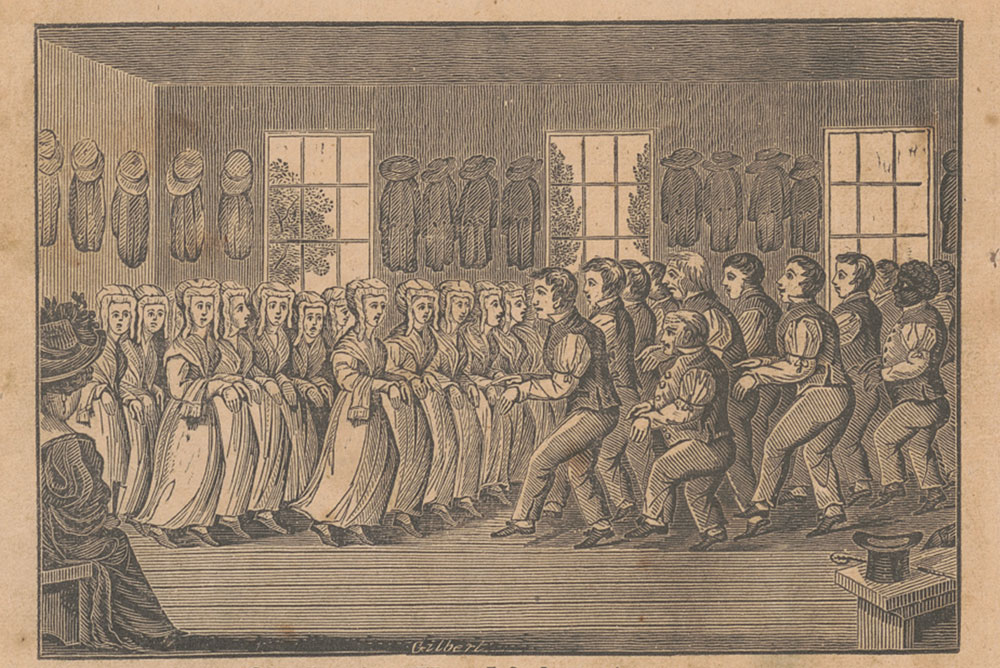 Shaker's worshiping, exercise / Gilbert. Courtesy of the Library of Congress.

Not content with mere verse, Noyes would go on to turn his emotional anguish into a theological critique of the institution of monogamous marriage itself (or as he once called it, “Egotism for Two”). Condemning monogamy as “simple” and replacing it with a more heavenly, polyamorous version that he called “complex marriage,” in 1848 he founded a religious sect based on his teachings: the Oneida Community in upstate New York. There, people would be stripped as much as possible of their worldly “I-spirit,” and have it replaced with the godlier “we-spirit” of genuine Christian fellowship. Only with this kind of radical reorientation, Noyes held, could believers experience community, family, and marriage in the way that God had intended them.

You may be feeling down about a lack of romantic fulfillment or a recent break-up this Valentine’s Day, or its succeeding “Singles Awareness Day.” But as Noyes’ story illustrates, you are hardly alone, among your contemporaries in 2022, or throughout human history. Three 19th-century American sects—the Oneida Pantogamists as well as Shaker celibates and Mormon polygamists—waged wars against the so-called selfishness of monogamous marriage. All viewed romantic exclusivity as sinful, a hindrance to creating a more universal love for a community of fellow believers.

Monogamy, of course, won out. Experiments like Noyes’ commune now seem distant, strange, and historically specific. And yet, there is something familiar and universal in them. They revolved, as we still often do, around heartbreak. What can they teach us about love and sex today?

We all search for meaning in the universe, and we all long for human intimacy—to know our place in the bigger picture, and to share that story with someone. These dual human drives are as old as the human species. Take the book of Genesis, for example. Before God created Eve, Adam knew his cosmic significance, walked with his Creator in Eden—yet was still lonely and bummed out.

Noyes could relate. “The next thing that a man wants after he has found the salvation of his soul,” he wrote, “is to find his Eve and his Paradise.” When his first love renounced their shared faith and then announced her engagement to another man, his universe came crashing down around him. 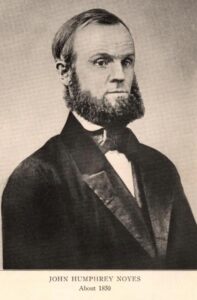 So he picked up the pieces and created a new one—without that sinful institution that had caused him so much pain: monogamy. Rather than becoming some kind of perpetual quasi-religious orgy, the Oneida Community was highly controlled. Prospective sexual partners had to arrange their liaisons—or “fellowships” as they called them—through the ministrations of a third party, sleep separately after the fellowshipping had concluded, and strive not to have the same partner too often in order to prevent the relationship from becoming exclusive. As Noyes knew from experience, the desire for exclusivity is one of the most powerful emotions that romanticized and sexualized human love can engender. Such passion could only bring spiritual ruin.

The Shakers, who were founded in mid-18th century England and reached the peak of their popularity in America between 1820 and 1860, similarly loathed the institutions of marriage and family for the sinful “natural affections” that accompanied them. Shaker villages were to be believers’ new families, complete with spiritual mothers, fathers, sisters, and brothers all living together in harmony: worshipping the Lord, working hard for their bread, and waging a communal war against the flesh by abstaining from sex.

Over the Shakers, too, love’s pain hovered. Mother Ann Lee, the group’s founder, had tragic and traumatic experiences in childbirth, losing all four of her newborns—a fact to which later commentators point as the psychological source of her hatred of all sex.

The story of Steven Sutton, a new convert living in the Shaker village at Canterbury, New Hampshire in the 1780s, illustrates just how painful this struggle against exclusive love could be. His wife “was an amiable woman, and I loved her,” he wrote. But after joining the community, “now I must hate her … The leaders said, ‘She was my god.’” Separating the family proved to be too much for her, and when “she was buried,” Sutton continued, “I was ordered to cover the earth over her coffin, to show that I had no natural affections; this I did, when at the same time, I felt as though I should pitch into the grave with her.”

For Mormon polygamists the message was largely the same, even if the remedy was assuredly not, with religious leaders especially targeting women in their crusade against selfishness. “I am sure that, through the practice of this principle” of plural marriage, Elder George Q. Cannon wrote, “we shall have a purer community, a community more experienced, less selfish and with a higher knowledge of human nature than any other on the face of the earth.”

The words of Helen Mar Kimball Whitney, plural widow of Joseph Smith and later apologist for Mormon polygamy, indicate that she had internalized this logic. Plural marriage “will exalt the human family,” she wrote in an 1882 letter, and “in the place of selfishness, patience and charity will find place in [plural wives’] hearts, driving therefrom all feelings of strife and discord.”

Three 19th-century American sects—the Oneida Pantogamists as well as Shaker celibates and Mormon polygamists—waged wars against the so-called selfishness of monogamous marriage. All viewed romantic exclusivity as sinful, a hindrance to creating a more universal love for a community of fellow believers.

As with the Shakers and Oneidans, selfishness was the real enemy of the Mormon polygamists—an impediment to personal godliness and communal unity that could only be slain (for the plural wives) through the sacrifice of their exclusive claim to their husbands. These sacrifices were often truly painful for the adherents of all three sects, which is why leaders needed mechanisms of control to enforce the communities’ practices whenever individual discipline wavered. Although faithful, the believers struggled profoundly to extirpate the special love they had for others—a love they were told was selfish and sinful.

Why did Mormons, Shakers, and Oneidans all target even the exclusive romantic love found in the time tested, biblically sanctioned, and socially accepted institution of monogamous marriage?

Well, for starters, perhaps that institution was not so biblically bullet-proof as its defenders might have imagined. All three groups used the same verses from the Bible to attack it. “The children of this world marry, and are given in marriage,” Jesus proclaims in Luke 20:34-35, but those worthy to obtain “the resurrection from the dead, neither marry, nor are given in marriage.” Both the Shakers and the Oneidans referred to this straightforward proof text often in defending their decision to abolish monogamy.

For polygamous Mormon Saints, who place the institution of marriage and the obligation of reproduction through sex at the center of their story of eternity, it was a little different. They believed that more wives would mean more children for the paterfamilias both on earth and in the afterlife. Mormons countered those selfish, complaining, plural wives who wanted to be their husbands’ one and only with a heightened commitment to religious duty.

What also bound these three sects together was the time and place in which they rose, institutionalized, and fell, relatively simultaneously. In the 1830s, the federal government was weak, the American frontier seemingly endless, and the opportunities for sectarian start-ups equally boundless. By the 1880s, however, the federal government was strong and getting stronger, the frontier was rapidly disappearing, and the majority of Americans were increasingly intolerant of sexual and marital arrangements they believed corroded the nation’s morality.

By 1881, the Oneida Community had dissolved, the Shakers were losing members at an alarming rate (and obviously, failing to spawn new ones), and many Mormons were actively choosing monogamy over polygamy. The external environment that had once nurtured religious sexual experimentation had indeed turned from tolerable to toxic, and the internal desire of many sectarians to reject monogamy for something else had waned as well. Having originally condemned romantic exclusivity as sinful, over time more of them nevertheless wanted it.

We still grab at the romantic ring today, and it is understandable that we do, especially coming out of the shared solitary confinement we have all been through for the past two years. Adam wanted an Eve. John Humphrey Noyes wanted his lost beloved. My wife wants me to up my romantic game. If this Valentine’s Day you, too, are feeling particularly fired up by romantic disappointment, you can always take a page from Noyes, and write a poem about it. Noyes’ verse continues:

You say your heart is still your own,
But words will never prove it.
What God and you and I have done
Will stand; the world can’t move it.

Or maybe try launching an entirely new religio-sexual community, complete with a cosmology, hierarchy, institutions, and disciplinary apparatus. And buy my new book, Sex and Sects. It will show you how.