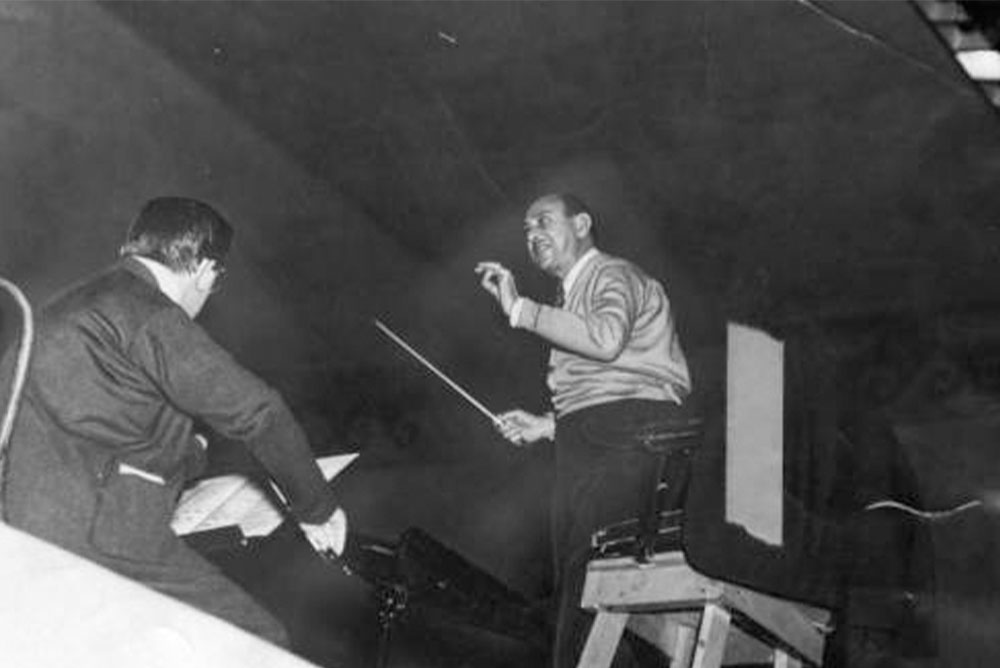 Arnold Schoenberg conducting during a rehearsal with the LA Philharmonic Orchestra in 1935. Courtesy of the Los Angeles Public Library.


Generations ago, in the parenthesis of years between Hitler’s 1933 rise to power and the end of World War II, a deluge of European artists and intellectuals came to the U.S., seeking refuge from the rising tide of fascism. Throughout the 1920s these men and women had enjoyed artistic freedom and prestige in cities such as Berlin, Vienna, Budapest, and Paris, where they helped define 20th century modernism.

They were writers, directors, actors, visual artists, architects, and musicians, and once they hit American shores, they flocked to three great cities. The writers and visual artists tended to gravitate to New York. The architects generally went to Chicago. And the musicians mainly settled in Los Angeles. Sunny California seems a quixotic, counterintuitive choice for artists who built their careers in epicenters of intellectualism and high culture. But most of them learned to live in this new sort of city, some even thriving here.

Like most wartime refugees, the émigré musicians who escaped Europe went where they knew people and where they could find work. And what better place to find work, especially as a musician, than Hollywood in its heyday of musical comedy—with its splashy sets, bloated budgets, and bottomless need for trained musicians who could work fast? And unlike writers or actors who faced the difficulty of speaking or writing in a foreign tongue, musicians had no language barrier.

Émigrés from all over Europe flocked to gatherings in homes like the Feuchtwangers’ Villa Aurora in the hills of the Pacific Palisades and Salka Viertel’s Santa Monica Canyon Sunday salons. There, over Sachertorte, rounds of ping-pong, and the occasional performance of an in-progress sonata or violin concerto, they compared whose English sounded the best, who had made the most American friends, who had secured a coveted seven-year contract at a movie studio, and who was still struggling to eke out a living.

Like most wartime refugees, the émigré musicians who escaped Europe went where they knew people and where they could find work. And what better place to find work, especially as a musician, than Hollywood in its heyday of musical comedy?

Meanwhile, a deep current of melancholy ran beneath their sharp banter, a gaping sense of loss hovering all around. The exiles tried to forget their former lives—forgetting was a form of survival—and fit into their new strange identities. But many felt at odds with Los Angeles’s natural beauty and ceaseless sunshine, with its brash Hollywood glamour, and its lack of obvious culture. Even though they knew they were the lucky ones.

Perhaps the deepest manifestation of the musicians’ discomfort with their surroundings was their perception of the tension between “high” and “low” art— between “selling out” to compose for the pictures and the more vaunted, but less financially viable, alternative of composing symphonies or string quartets.

Austrian Jewish composer Arnold Schoenberg arrived in Los Angeles by way of Paris in 1934, and soon began teaching at USC and then UCLA. He was known for the intensity of his presence, often described as having burning dark eyes that pierced through his more faint-hearted pupils and fellow musicians. He played tennis on George Gershwin’s court, and socialized with Charlie Chaplin. Despite having invented the groundbreaking 12-tone system of composition—with its jarring dissonances and departures from familiar tonal music—by the time Schoenberg was in Los Angeles he had returned to tradition somewhat. He described feeling an “upsurge of desire for tonality” as Alex Ross explains in The Rest Is Noise: Listening to the Twentieth Century. In Los Angeles, Schoenberg wrote “Suite in G for String Orchestra,” “Variations on a Recitative in D Minor” for organ, and “Kol Nidre” for synagogue choir. The aim of these more tonal works, Ross writes, was to “create more marketable hits” whose profits would allow Schoenberg to pursue more advanced musical projects.

Schoenberg harbored a great desire to write for the movies, but could never abandon more high-minded pursuits. In a now infamous meeting with Irving Thalberg, then head of production for MGM, the composer discussed scoring the 1937 film The Good Earth—only to demand complete control over all sound, including the dialogue. This, Schoenberg told a stunned Thalberg, would mean that the actors “would have to speak in the same pitch and key as I compose it in,” Ross recounts. Schoenberg also asked for a fee of $50,000. Given such unrealistic demands, nothing ever came of his Hollywood aspirations.

Russian composer Igor Stravinsky fled to Los Angeles after the fall of France in 1940, and like Schoenberg, tried his luck with film composing, with little success. Stravinsky was famous around the world, and the industry was eager to slap his name on their films. But his music appeared in only one Hollywood movie—Disney’s animated Fantasia, which Stravinsky apparently hated. Stravinsky demanded too much time and too much control to really succeed as a movie composer, but he dipped into the commercial realm every now and then, composing “Tango” for Benny Goodman’s band and “Circus Polka” for the Ringling Brothers Circus. The latter was performed by 50 elephants (Stravinsky specified they must be “young elephants”) along with 50 ballerinas, all in pink tutus, and choreographed by George Balanchine.

Unlike Schoenberg and Stravinsky who yearned for silver screen glory but never quite got it, Erich Wolfgang Korngold, a musical prodigy from Vienna, became wildly successful in shaping the “sonic texture” of Golden Age Hollywood, as Ross calls it. Korngold’s lush, late Romantic opulence was well suited for studio fare. Among Los Angeles émigrés it was a putdown to say that something sounded like “film music,” and Korngold’s critical reputation diminished as a result of his commercial success. Today his work is getting some much-deserved reconsideration and recognition. La Scala put on his first opera, Die tote Stadt (The Dead City) in 2019. That same year, the Bard Music Festival performed his second major opera, Das Wunder der Heliane.

Displaced artists and musicians such as Schoenberg, Stravinsky, and Korngold clung to the Old World while struggling to adapt to a new one. Some despised Los Angeles and found it inhospitable to making art. But others loved Los Angeles and thrived here. Those who flourished artistically learned to carry home within themselves, despite the unimaginable loss of family and loved ones, of careers and identities, of all they had known to be true and beautiful. These refugees witnessed the world fall away from them, the ground shifting beneath their feet faster than they could run over it, all the while figuring out new ways to carry on, to adapt, to keep existing.