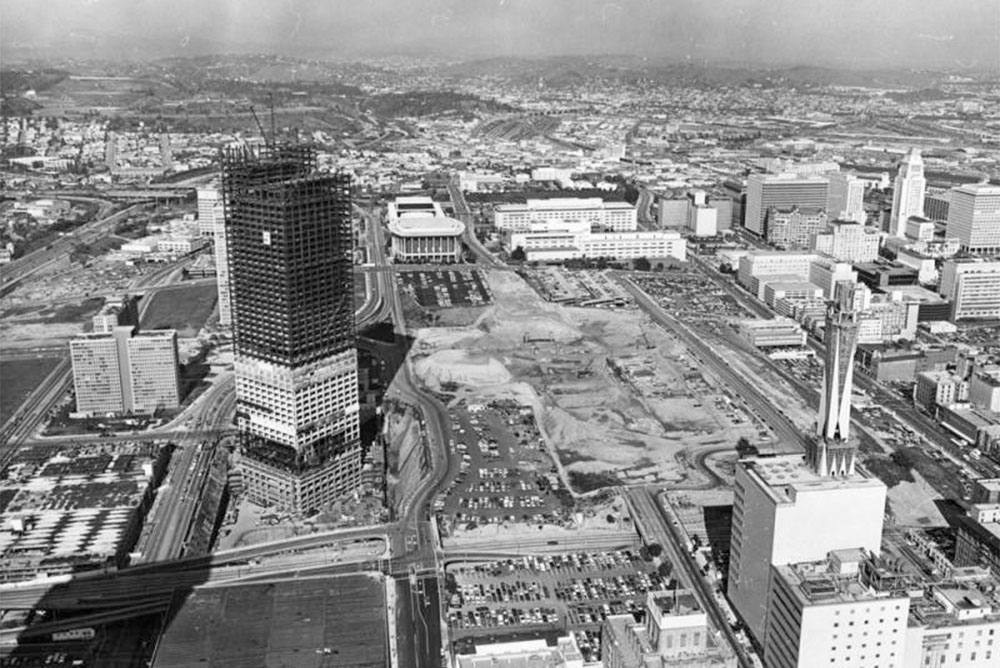 Sixty years ago this spring, when Dodger Stadium opened at Chavez Ravine overlooking downtown, it signaled the end of one Los Angeles and the beginning of another. The story of the city of L.A.’s removal of the Mexican American homeowners in Chavez Ravine is well documented. But the story of the last days of the nearby Bunker Hill neighborhood is less well known—and opens a window onto the city and the stadium’s past and future.

There wasn’t much to “downtown” in April 1962: just City Hall, the L.A. Times building, some offices and stores, and the decaying Victorian homes, down-at-the-heels apartment buildings, and shabby rooming houses of Bunker Hill. The civic and business leaders who supported team owner Walter O’Malley’s Dodger Stadium project, from then-mayor Norris Poulson to Times owner Norman Chandler and Union Oil chief Reese Taylor, envisioned a different downtown, one that would match those in the two cities they most admired and envied: New York and San Francisco.

They believed that the construction of Dodger Stadium would begin the process of building that downtown. Starting in the late 1950s, they also laid plans to obliterate the eyesore and embarrassment they saw in the Bunker Hill neighborhood through an ambitious redevelopment project that would stretch across three decades.

By 1961, down the hill from Chavez Ravine, the process of razing and demolishing the structures on Bunker Hill had begun, and an older Los Angeles was passing from view. Thanks to a brilliant and long-underappreciated filmmaker, we can bear witness to its last days.

Kent Mackenzie began shooting what became The Exiles in the late 1950s on the streets of Bunker Hill. The neighborhood was home to an extremely diverse working-class population. Residents included a substantial number of Native Americans, many of whom had moved to Los Angeles after World War II as part of the federal government’s termination policy, which sought to end tribal affiliations and encourage assimilation.

By 1961, down the hill from Chavez Ravine, the process of razing and demolishing the structures on Bunker Hill had begun, and an older Los Angeles was passing from view. Thanks to a brilliant and long-underappreciated filmmaker, we can bear witness to its last days.

Mackenzie’s movie follows a group of Native American men and women over the course of a typical night and morning on and around Bunker Hill. The director filmed in documentary style, his camera peering over his subjects’ shoulders as if he were a member of the group. Part narrative, part nonfiction, The Exiles featured Bunker Hill residents who reenacted scenes from their own lives, with interview voice-overs serving to frame their stories. 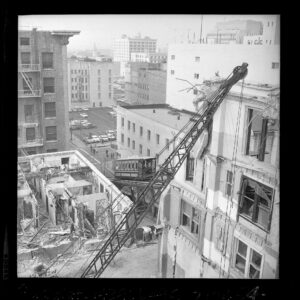 Mackenzie’s camera eye captured loneliness, alienation, and episodic violence against a crumbling downtown landscape. A neglected mother-to-be peers into darkened store windows and walks past the Angels Flight funicular railway on a deserted Hill Street. A hair-trigger altercation breaks out in a Main Street bar. A car filled with revved-up nightriders speeds through the 3rd Street Tunnel. In the flim’s climactic scene, the protagonists gather after midnight on “Hill X” in Chavez Ravine for a session of Native American drumming and dancing. That space will soon become the parking lot of the new Dodger Stadium, the fading past intersecting with the beckoning future of the city.

The year after The Exiles premiered, Dodger Stadium opened, and its effect on downtown was palpable. By the end of the 1960s the Music Center had debuted, and Bunker Hill, which Raymond Chandler once described as “old town, lost town, shabby town, crook town,” was on its way to becoming the high-rent retail, residential, dining, and entertainment hub we know today. In 1969, Bunker Hill Towers, the neighborhood’s first upscale housing development, opened its doors, followed over the next half century by MOCA, Disney Concert Hall, the Broad, the Colburn School, California Plaza, and even a new version of Angels Flight. The “exiles” of Mackenzie’s film, along with the old Bunker Hill, had vanished. So had the film itself. Unable to secure a distributor, Mackenzie watched The Exiles fade into obscurity before his death in 1980.

Dodger Stadium, of course, fared much better. Acclaimed for its sleek, linear architecture, modern conveniences, family-friendly atmosphere, and—at least under its initial owners, the O’Malley family—reasonable ticket prices, it served as a form of civic glue for an often-fractured city. Dodger Stadium also marks the spot where modern Los Angeles began. A modern city possesses a downtown with civic, cultural, and recreational institutions commensurate with its status on the national and global stage. While downtown’s pressing issues today include crime, homelessness, and affordability, it bears no resemblance to the barren, work-’til-5-then-get-out zone that existed when excavation for Dodger Stadium began in 1959. And today, few Angelenos, even those who decry the city’s forced removal of Chavez Ravine residents, can imagine Los Angeles without Dodger Stadium.

Unlike Dodger Stadium, it took The Exiles years to be appreciated, but its time finally arrived. Restored by the UCLA Film and Television Archive in 2008, and offered the publicity and distribution it had initially been denied, The Exiles became a critical success. The restoration garnered numerous admiring reviews, a showing on Turner Classic Movies, and a spot on the Library of Congress’s National Film Registry honoring “culturally, historically or aesthetically significant” American films.

The city that The Exiles captured, however, is gone. And it is likely that despite the love it evokes from the people of Los Angeles, Dodger Stadium will one day be gone as well. Even with its new conveniences and features, it cannot match the recently opened SoFi Stadium’s futuristic amenities and multi-platform media reach. That stadium will be the symbol of yet another “new” Los Angeles.

So a 60th birthday season is a moment to salute and admire Dodger Stadium while we still can—and remember the Los Angeles of The Exiles that it replaced. In L.A., forever is just a word.