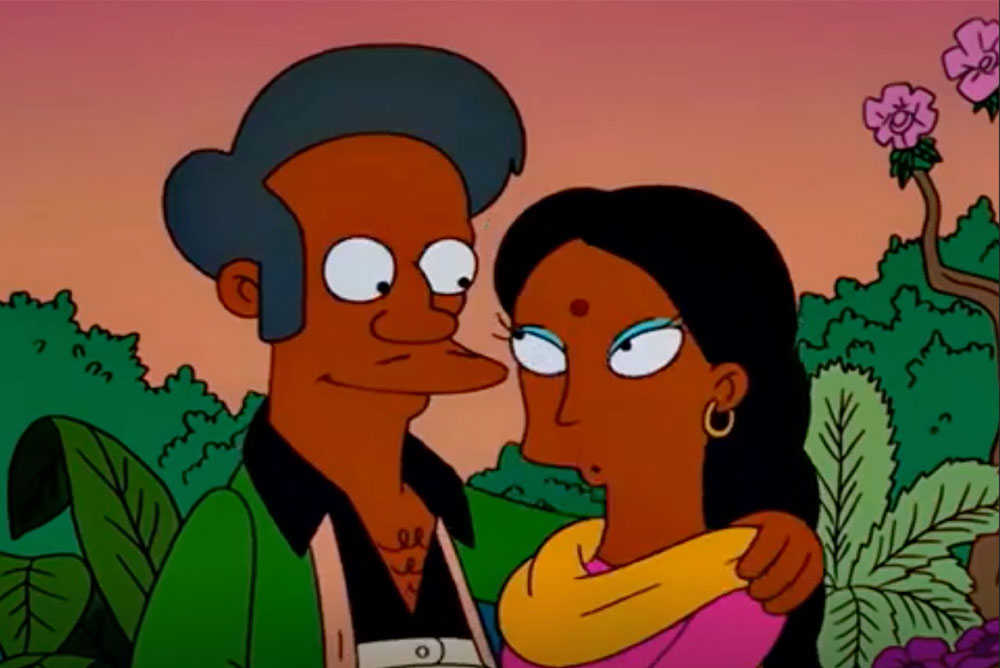 Ali M. Latifi argues it was short-sighted for The Simpsons to 'cancel' Apu (featured above with his wife, Manjula). His depiction "said something about the human condition that Springfield’s more clownish characters could not." Courtesy of Simpsons Wiki.

“Bring Back Apu” is a new comedy special from Akaash Singh, the 38-year-old Indian American comedian who wants The Simpsons to revive the Springfield Kwik-E-Mart owner. For nearly three decades, Apu was voiced by the white comedian Hank Azaria—until a backlash forced Azaria to give up the role.

In the 2017 documentary, The Problem with Apu, South Asian American comedians Kal Penn, Aziz Ansari, Aasif Mandvi, and Hasan Minhaj famously spoke of the ways Apu’s character was weaponized to bully them when they were children. So why does Singh want to bring back a character that has caused so much harm?

Singh says the cancellation of Apu was an “overcorrection.” He is tired of flat, trite, and one-dimensional South Asian characters in media and entertainment. And so am I.

When I watched The Simpsons growing up as an Afghan immigrant still learning about American culture, Apu always struck me as funny, but not vicious. He was also one of the few characters to have a real arc. Over the years, I saw him become more than just the one-note Kwik-E-Mart owner—he was an entrepreneur, a father to octuplets, and even had a doctorate. Also, Azaria’s voice, though put on, invoked true empathy during emotional storylines, like when Apu loses his store and faces deportation. Apu’s words may have been coming out of the mouth of a white man, but his story said something about the human condition that Springfield’s more clownish characters could not.

So, I found myself wondering if Apu was the right target. Should we be ashamed of Apu himself? As Singh points out in his debut standup special, much of the criticism around Apu relies largely on how white people have accepted or interpreted Apu.

Take the anger around Apu’s accent. What is driving it? Is it actually about the white man behind it? Or is it the result of some internalized shame about an inflection that all too often has been used as a punch line?

“Is it because you think the accent is ugly?” Singh asked in a telephone interview before the special’s February premiere. “I don’t think it’s ugly. My parents have one. I’m not embarrassed by it. The ones who think it’s offensive, they probably are.”

Or maybe it’s his occupation. Apu’s small business may be seen as the embodiment of a 1990s cliché about Indian men owning convenience stores, but with 80,000 Indians owning such establishments in the U.S., these stores have actually financially empowered generations of Indian families. His victory as a self-made entrepreneur is something to celebrate, not feel pigeonholed by. It also makes him an even better representation of Indians in the U.S., specifically. After all, from Alphabet’s Sundar Pichai to Microsoft’s Satya Nadella and Indra Nooyi, who stepped down as CEO of Pepsi in 2017, some of the biggest companies in this country have been headed by Indians.

The ‘canceling’ of Apu feels like a short-sighted attempt to placate an audience rather than do the real work of keeping him on the show. White people and others will always misunderstand us. Why should we bend to their discomfort?

Apu is also more than his business acumen. One of the character’s most endearing qualities is how principled and loving he is. Before his marriage to Manjula, Marge makes a point of stating that Apu is Springfield’s most eligible bachelor. During the 1997 episode we see this in action at a date auction. None of the other single men muster even a single bid, but a date with Apu fetches nearly $1,000, collected from several single ladies. In other words, he is living it up as a bachelor when his mother arrives with news that his arranged marriage is happening. After deliberation, Apu chooses to honor his commitment, and comes out happier for it.

In Western media, which tends to depict arranged marriage as some kind of archaic and problematic relic, Apu and Manjula’s marriage is a rarity. Considered in this lens, Apu is a true depiction of a South Asian character with strong values and an entrepreneurial spirit.

The “canceling” of Apu feels like a short-sighted attempt to placate an audience rather than do the real work of keeping him on the show. White people and others will always misunderstand us. Why should we bend to their discomfort? Instead, what if we embraced the way that comedy is a vehicle to ask and confront these difficult questions of representation?

After stepping down from the role of Apu in 2020, Azaria said in an interview that he felt as if he needed to “go around to every single Indian person in this country and personally apologize.” But Azaria’s apology and willingness to put an end to one of the few South Asian characters on TV did little to solve anything. It just took away a character who could have been used to explore not just the Indian or immigrant experiences, but life as a businessman and a father. Erasing Apu won’t fix the problems with him; making him an even more rounded and full character will.

To Singh, Apu is a hero for a whole generation of immigrants and their families—an example of someone who is “a victor not a victim.”

I’ve been talking to Singh for months now, and those conversations about big, heady topics have led to further conversations with other South Asian friends. In that time, one thing has become increasingly clear: representation is hard. It matters. But it’s tough to get it right.

You can try your best and you’ll never make everyone happy or address everything. But that doesn’t mean we shouldn’t try.

That’s why Singh is calling for a new paradigm in representation. It’s an evolution of the conversations just after George W. Bush signed the Patriot Act in 2001 and brown men across the U.S., Muslim or not, were coming face to face with Islamophobia and profiling. It also descends from the discourse of the 2010s, when brown actors and comedians were starting to talk about having to try out for problematic roles on 24 and Homeland after growing up on the gross misrepresentations present in Indiana Jones and the Temple of Doom and the brownface of Short Circuit 2.

In 2022, Singh wants the conversations about representation to be less about how white people have presented us for decades, and at last focus on how we intend to represent our cultures, our countries, and people to the wider world. And, more importantly, to ourselves. Even when it comes to addressing things some may not like, moving closer to honesty should be the barometer for moving forward.

It’s no longer enough to just sprinkle in some brown faces. Their presence has to matter. Their stories should embody the same complexities and developments as any white character, otherwise their existence merely checks a box.