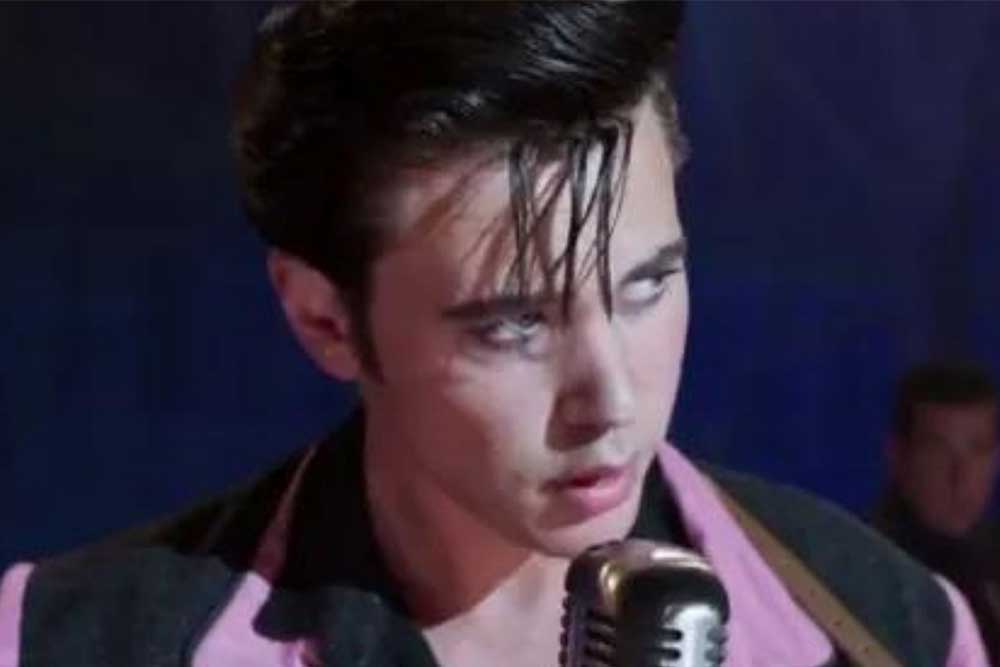 There’s much to be said about Elvis Presley, the quote-unquote King of Rock ‘n’ Roll who shook the country as a white kid singing Black America’s music.

But despite its nearly three-hour run time, Elvis, the new Baz Luhrmann biopic, stays about as black and white as the racial divide it seems to suggest Presley alone could cross.

Most baffling is how incurious the movie is. It never engages on more than a surface level with the racism of the Mason–Dixon-lined country that catapulted Presley to fame. Nor is it interested in thinking deeply about the class and regional dynamics that shaped Presley, whose formative years were spent in poverty in the South.

Even the star’s own demons are given a cursory pass; the closest we get to pedophilia allegations is a mention of Priscilla Presley’s age, 14, when she meets the star. And though Presley reportedly struggled with substance abuse and was hooked on prescription opiates and sedatives, his addiction is treated mostly as a plot device.

The one clear point that the film (which has been rubber-stamped by Presley’s family) wants to make is that Presley was a peerless talent taken from us too soon, because he trusted the wrong people along the way.

There is a deeply sympathetic tale to be found in this, of course—it’s a truly American sadness watching a person commodified and used as a cash grab until they have nothing left to give. To see how little the dial has turned since Presley’s time, one only needs to look to what Britney Spears has endured.

But the film isn’t willing to do the real work of getting at who the complex figure beneath the sideburns was. Instead, Elvis’s creed seems to be borrowed from the personal philosophy of the star’s long-time manager, Colonel Tom Parker: “Don’t try to explain it; just sell it.” Parker, naturally, is the narrator of the film, where he’s presented as a carnival barker who’s found his meal ticket (the less said about Tom Hanks’ performance in the role, the better).

Through Parker’s point of view, Presley becomes just the attraction, a talented object whose strings Parker is pulling, which instantly absolves the young singer of any responsibility—or agency. That’s too bad, because the contradictions of race, class, power, and consumerism (the film does at least do a good job of showing how the Elvis brand understood there was a burgeoning youth market waiting to be tapped into through merchandise sales) that made Presley a megawatt star holds deep relevance today.

The contradictions of race, class, power, and consumerism (the film does at least do a good job of showing how the Elvis brand understood there was a burgeoning youth market waiting to be tapped into through merchandise sales) that made Presley a megawatt star holds deep relevance today.

For a hint of a different film that could have been made, one only needs to listen to the Doja Cat song “Vegas,” which was released with the movie’s soundtrack. The song samples from “Hound Dog”—not Presley’s 1956 version, but the original—recorded four summers earlier by a 26-year-old Black rhythm-and-blues singer from Ariton, Alabama, named Willie Mae “Big Mama” Thornton.

In her rendition, Thornton growls after a man who sponges off of women—her voice: playful, angry, rich—sending him away after he comes “snoopin’ ’round” her door.

Jewish teenagers Jerry Leiber and Mike Stoller had penned the empowering lyrics specifically for Thornton. “She looked like the biggest, baddest, saltiest chick you would ever see,” Leiber later told Rolling Stone, of the gender-non-conforming singer. “I had to write a song for her that basically said, ‘Go f— yourself.’”

Big Mama’s “Hound Dog” went on to inspire a number of artists before Presley, including Freddie Bell & The Bell Boys, a white lounge act at Las Vegas’ Sands hotel who turned the song into a comical account of a literal hound dog. Theirs was the version that spurred Presley to record his own track.

“Hound Dog,” the 21-year-old’s follow-up to “Heartbreak Hotel,” went on to go No. 1 on Billboard’s pop, R&B, and country charts, and would become one of the most recognizable songs of all time. But Presley never directly credited Thornton for her work, robbing her of name recognition and lucrative deals (she would later say in interviews that she made less than $500 off of “Hound Dog”).

None of this weighs heavily on Elvis. The only plot point around “Hound Dog” is when it is used to show how Presley himself was punished for reaching across the color line in his performances. We see Presley humiliated on stage for it, as he is forced to serenade a basset hound on “The Steve Allen Show” while wearing a tuxedo.

There’s a reason so many in power were so threatened by what Presley was doing and put pressure on him to show white America a “new” Elvis. His act “undermined the myths and stereotypes that sustained Jim Crow segregation,” as historian Michael T. Bertrand put it in the 2007 article “Elvis Presley and the Politics of Popular Memory.”

As honestly as Presley came by his own love of the music he performed, and though he regularly spoke about how rock ‘n’ roll was not something he started—“Nobody can sing that kind of music like colored people. Let’s face it: I can’t sing like Fats Domino can. I know that,” he said in 1956—his legacy is forever tangled in the racial politics that catapulted his mythic rise.

Later, after Presley’s death, the great author Alice Walker put words to this in her short story, “1955, or, You Can’t Keep a Good Woman Down.”

First published in Ms. magazine in 1981, Walker’s story fictionalizes what happened with “Hound Dog.” The author has the Presley character publicly recognize Thornton for the song, even bringing her on “The Tonight Show” to perform. Still, the fans only have eyes for him—and he is haunted by receiving the credit for someone else’s work.

Reading the story now, it’s as timely as when it was originally written.

After the Presley character dies young—“some said heart, some said alcohol, some said drugs”—the Thornton character learns of the public outpouring of grief, but doesn’t want to see it.