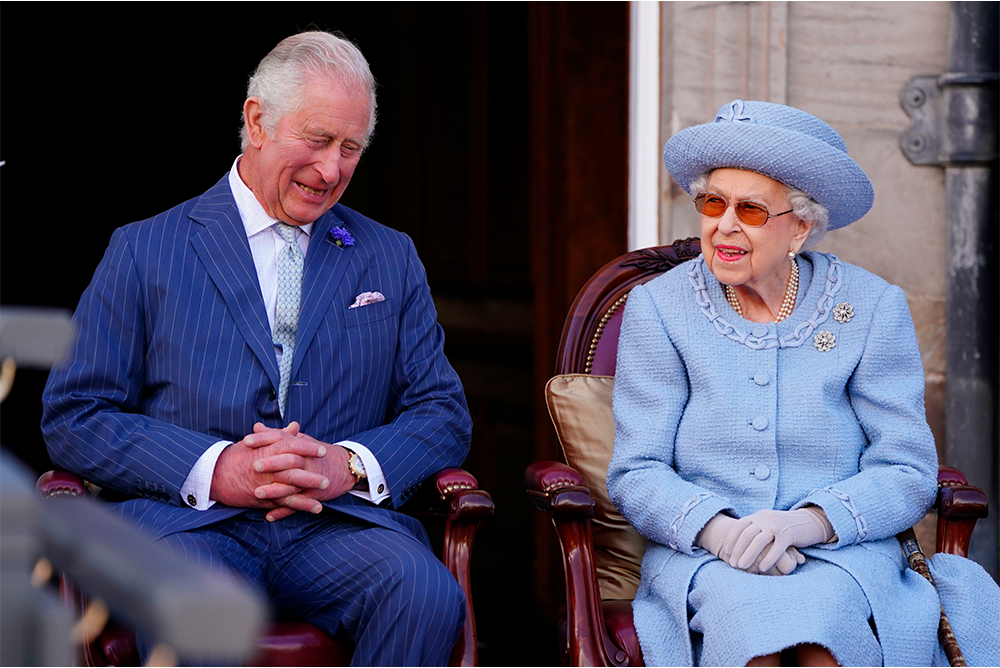 Britain's late Queen Elizabeth II and her son King Charles III together in June 2022. Political scientist Matt Qvortrup argues that the newly appointed king would do well to adopt his mother's talent for "maintaining the sense she was above the fray," making her a symbol of unity in divisive times. Courtesy of AP/Jane Barlow.

If the British monarchy is to survive, it needs someone who is as bland as Queen Elizabeth II.

You would look in vain for any controversial statements made by the queen during her lifetime. Sure, in the internet age, she, too, acquiesced to having a Twitter account, and a team of press people would post things on Instagram in her name. But they were all bland, uncontroversial—and, frankly, dull.

In an age when everyone has an opinion—when everyone in public life feels an urge to tell all and sundry about their grumbles, gripes, and grievances—she never did. That is exactly why she, and the monarchy, became a stabilizing factor in a time of upheaval.

Take this anecdote from 1995, when the Montreal broadcaster Pierre Brassard phoned Queen Elizabeth II at Buckingham Palace and convinced her that he was then-Canadian Prime Minister Jean Chrétien. The Canadian politician was concerned that the French-speaking province of Quebec would break away in a referendum in that year. And the imitator asked the queen to intervene. She did not. Nor did she deny the request. She just responded with studious dullness, and small talk. What would have been a scoop was nothing of the kind, because the queen said nothing of substance.

She had opinions. But they were tightly guarded. And they were only revealed when David Cameron (her 12th Prime Minister) broke with protocol. “She purred down the line,” Cameron reportedly said, describing the queen’s display of happiness when he informed her of the failure of a referendum to make Scotland independent in 2014.

Cameron got in big trouble for relaying that detail. Because the monarchy is based on the premise that the queen (or king) is a neutral arbiter, literally above the fray, sharing a choice anecdote from the weekly meeting between the British monarch and her PM was seen as a betrayal of confidence. In the aftermath, Cameron had to tuck his tail between his legs. “I have made my apologies and I think I will probably be making some more,” he told reporter Andrew Marr on BBC One.

In British constitutional theory, the role of the monarch is almost purely ceremonial. But not entirely. In 1867, the journalist Walter Bagehot wrote that the queen was part of the “ceremonial” part of the constitution, not the “functional.” The sovereign was no longer the ruler, but she maintained “the right to be consulted, the right to encourage, the right to warn,” he wrote in the book The English Constitution.

The role of the monarch when Bagehot wrote was to be a unifying figure. The constitutional monarchy was devised in the Victorian age as a means to overcome class divisions. The queen was to personify the unity in a country that was deeply divided. This is still her role.

But, paradoxical though it may sound, the unelected monarch also has a democratic role to play. If she (or now he) knows how to perform the duties.

In the 1990s, Vernon Bogdanor, an Oxford academic (who was also my doctoral supervisor) controversially argued that “far from undermining democracy, the monarchy sustains and strengthens democratic institutions.”

Don’t get me wrong, the idea of a monarchy goes against every logical tenet of a meritocratic society. Having someone who is born to a position in society is profoundly undemocratic. And yet, one could make the argument that her ability to give politicians advice was uniquely unpolitical and disinterested, since she had a long view and never had to face voters.

When, on rare occasions, no party had a majority in the House of Commons, she could advise on who could form a government in a way that was not party political. Her reserve also gave the whole political sphere to elected officials; she, like the most understanding parent, would never criticize them in public, even if she might disagree in private.

Queen Elizabeth’s talent for not saying anything, maintaining the sense that she was above the fray made her such a rallying point, a symbol of unity, for many in a divided society.

By contrast, in countries with an elected head of state (Finland, Italy, or Germany, to name only a few) the president is almost inevitably a former politician. Only the most unopinionated presidents in European countries—notably ’90s Irish president Mary Robinson and the present Irish president Michael D. Higgins, a poet in his previous life—have managed to be accepted as neutral arbiters. More typically, there is a strong whiff of partisanship around Europe’s elected presidents, a sense that the advice they give to prime ministers or chancellors is tainted by past political allegiances.

This is not the case with a monarch.

And in this Queen Elizabeth was an unrivaled master, once again, because she was, yes, bland.

In 1975, the queen’s representative in Australia, Governor-General Sir John Kerr, dismissed the leftist Australian Prime Minister Gough Whitlam. For years, Australians speculated that the monarch herself had deliberately sacked the reforming Labor leader. Yet, when the files were finally released in 2020, there was no smoking gun, no conspiracy, no evidence that she had known of the sacking ahead of time, much less approved it. No surprise: What the files did contain were various bland statements by the queen.

Queen Elizabeth’s talent for not saying anything, maintaining the sense that she was above the fray made her such a rallying point, a symbol of unity, for many in a divided society.

The big question for the British monarchy now—and for the countries that still have her as the head of state (including Canada, New Zealand, and Jamaica)—is if her successor is capable of displaying the same talent.

The queen’s oldest son —King Charles III as he is now known—has a reputation for his strong, sometimes compelling opinions on everything from architecture to the environment. “My old Aston Martin, which I’ve had for 51 years, runs on—can you believe this?—surplus English white wine and whey from the cheese process,” Charles once told the BBC without a hint of irony, thus putting an ocean of distance between himself and the common.

Now, suddenly, having opinions is no longer his job. Is he up for aloofness?

In a constitutional monarchy, once the monarch has an opinion, the support for the institution falls away. When Spanish King Felipe VI made remarks about the region of Catalonia that indicated he was unsympathetic to the secessionist aspirations of some Catalans, it damaged the institution of the monarchy.

By contrast, the Danish Queen Margrethe II has studiously avoided having any opinion on Greenland and the Faroe Islands and their aspirations for greater sovereignty, emulating a blandness commensurate with her late English colleague. It is no wonder then that in Denmark, unlike Spain, the monarchy remains strong.

Charles must do his utmost to show that he is the king of all Britons. This is a difficult task—and an urgent one. The Scottish government is seeking a second independence referendum in 2023. And while Queen Elizabeth, who died at Balmoral, was highly popular in Scotland, only a minority of the Scottish people support the monarchy as an institution.

For a while, conventional wisdom had it that the English monarchy could be saved if the opinionated Charles were to abdicate in favor of Prince William. But William’s very publicized spat with his younger brother Harry and Harry’s wife Meghan—and how race was a part of that controversy—means that he, too, is not seen as neutral. (In contrast, the queen managed to avoid the publicity backlash that William faced, while still reportedly being involved in the unwelcoming of Meghan.)

Of course, it may be inhuman for any flesh-and-blood monarch to match the mien of the most successful and studiously bland monarch in modern history. But politicians may find it worthwhile to try to imitate her.

The late Queen Elizabeth’s lasting lesson is that, in divided and diverse societies, we still need institutions that appear to be uncontroversial and above the fray, and we still need the illusion of simple and steady leaders onto which we can project our own complicated feelings.