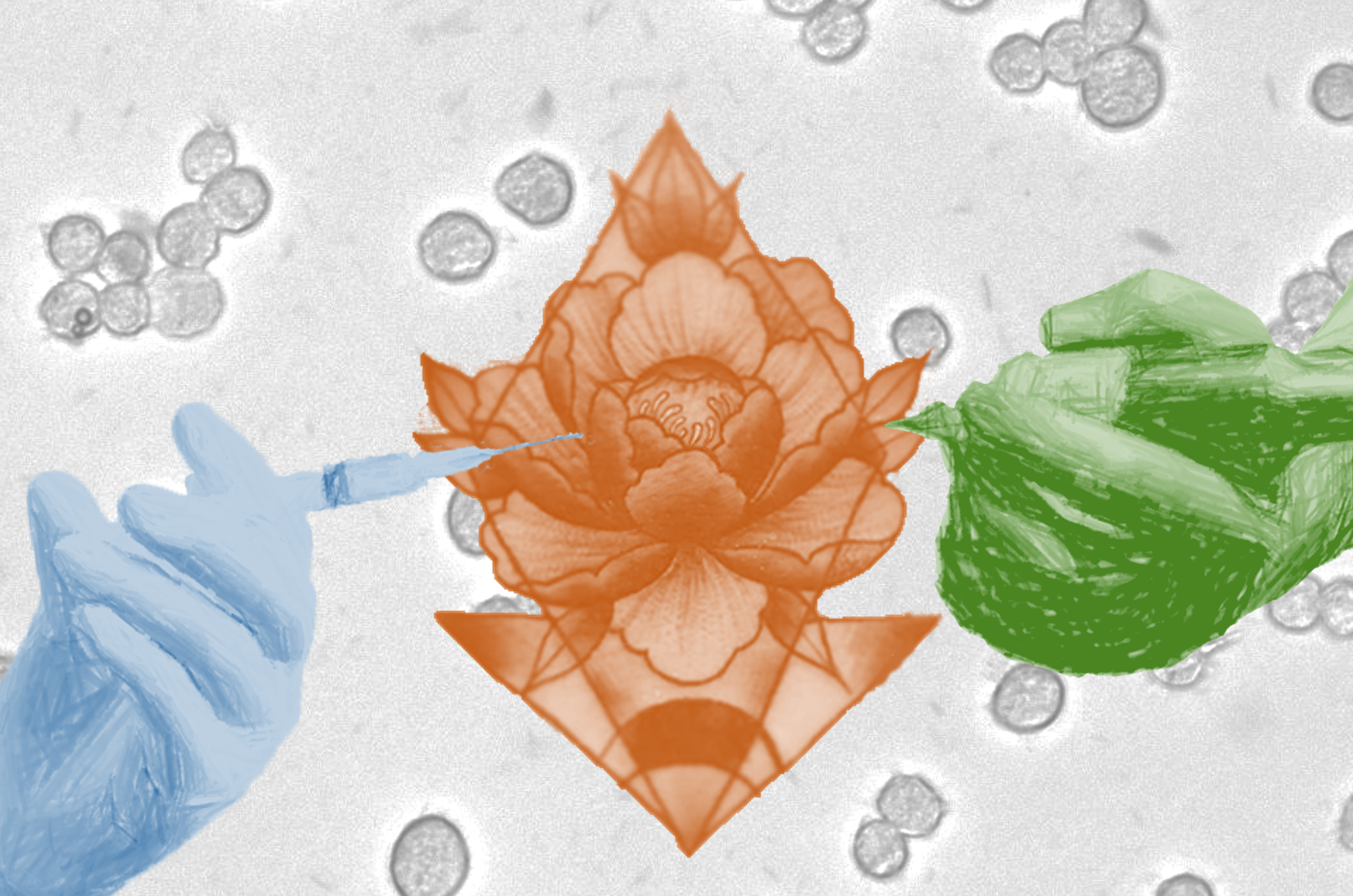 In this collage, Anh Diep blends photos of their research, their own tattoo (designed by Thore), and the hands of a tattoo artist and a doctor as an homage to 'The Creation of Adam.' The background is a microscope image of macrophages that they photographed for their PhD research. Illustration by Anh Diep.


Tattoos and medicine may seem an unlikely pairing, but medical tattoos are nothing new. Religious tattoos of ancient Egyptians honored the gods and, possibly, directed divine healing to ailing body parts. Circa 150 CE, Galen, a Greek physician working in the Roman Empire, tattooed pigment onto patients’ corneas to reduce glare and improve their eyesight. In the past century, more and more people have tattooed their medical histories, such as blood type, hereditary conditions, and even medical requests such as “do not resuscitate,” on their wrists and chests. Modern doctors have also used tattoos in reconstructive and cosmetic procedures to disguise scars and restore the appearance of lost body parts, such as nipples for mastectomy patients.

Today, that history comes full circle—as researchers now try to determine if tattooing could be used as a medical tool, giving healthcare providers a better way to administer drugs and vaccines.

It was only recently, in 2018, that scientists figured out exactly what happens in the immune system when you get a tattoo. They identified macrophages, a type of immune cell, as critical players in the process. Macrophages are part of the first responder unit of immune cells, also known as innate immunity. To understand what macrophages do, look no further than the Greek roots of its name: Macro–phage means “large-eater.” These pliable cells, which develop deep in our bone marrow, travel through the bloodstream and target microbial invaders in tissues, engulfing and “eating” them through a process called phagocytosis, thus clearing infections. Often, the response is so fast and effective that we don’t realize we’ve been infected at all.

Macrophages are also the accomplices that make tattoos permanent. When a tattoo needle punctures the skin, it tears apart the skin, fat, and connective tissue in its path. As they’re damaged, these cells release chemical distress signals, which travel into the bloodstream and surrounding tissue. The signals attract immune cells to the damage site and put adjacent cells on high alert. Depending on its size and complexity, a typical tattoo will inflict hundreds of thousands, and possibly millions, of these puncture wounds. Macrophages near the tattoo site, ever on the prowl, ingest any mysterious, foreign substance they happen to find—in this case, targeting the ink the tattoo artist has applied with the tip of their needle. In a twist that researchers still don’t fully understand, the macrophage “eats” the ink but cannot destroy it (one theory is that tattoo inks, which nowadays are usually carbon-based and suspended in a carrier fluid such as distilled water, isopropyl alcohol, or glycerin, are simply resistant to the cell’s enzymatic breakdown strategies).

Tattoo artists have harnessed the body’s defense network to inscribe and preserve art within your skin. It begs the question: Why can’t researchers leverage the same approach to advance medical treatments?

The macrophage then does one of two things: 1) carry the ink away to a nearby lymph node for disposal or 2) sit there. “Sitting there” is a strategy macrophages sometimes employ with trickier foes. Macrophages and other immune cells will try to engulf as much of the invading material as possible but can’t fully destroy it, so the macrophages hunker down and form a blockade structure with their bodies, called a granuloma, to isolate the pathogen from the uninfected tissues (the macrophage motto: “If you can’t destroy them, trap them.”). When you get a tattoo, some of your macrophages sit and hold the ink to “protect” you, in the process becoming inadvertent guardians, preserving your tattoo design.

Your tattoo design, then, is an artful, exterior display of your body’s immune response.

Tattoo artists have harnessed the body’s defense network to inscribe and preserve art within your skin. It begs the question: Why can’t researchers leverage the same approach to advance medical treatments?

In 2016, the American Academy of Dermatology estimated that one out of every four people in the U.S. is impacted by skin ailments such as microbial infections or various cancers. Another study, in 2019, reported that Americans spend $13.8 billion dollars battling skin and soft tissue infections each year. Physicians today treat serious skin infections by giving patients intravenous or oral medication, which can be costly and can cause side effects. Minor infections may respond to topical ointments and creams, but these don’t always work well because the drugs may have to penetrate the skin barrier to reach the target site, resulting in variable absorption.

Tattooing medications into infected tissues might work better. A fluid dynamics study from 2021 (preliminary version here) used a gelatin block to simulate flesh, and characterized how needles deliver ink to skin. As a needle punctures tissue it creates a brief opening, which draws ink in as the wound closes back. Repetitive needling over the same puncture increases the total volume drawn in. The mechanism yields interesting possibilities for difficult-to-deliver drugs and vaccines.

In a proof-of-concept study using laboratory mice with cutaneous leishmaniasis, a parasitic skin infection marked by inflamed lesions, researchers administered an anti-parasitic drug using three routes: administering it topically as a cream, injecting it into the torso with hypodermic needles (the kind widely used in healthcare) to mimic drug circulation through the bloodstream, and using a commercial tattoo needle to inject medicine directly into the infection site. Tattooing treatment directly into the wound decreased parasite numbers within infected tissues and decreased lesion size and tissue inflammation more effectively than the other techniques. It ensured high drug concentration at the target site, while using less of the drug than other methods. Researchers and pharma companies are also evaluating a similar mechanism, microneedles, for treating skin infections. Microneedle patches for common woes such as acne are already available on the consumer market.

Tattoos may also ease the delivery of vaccinations to prevent disease. Today, most vaccines are administered by hypodermic needles that inject into the muscle. The thicker the vaccine, the larger the needle—and often, the more painful the injection. Human skill impacts pain levels, too. An injection may hurt more if an administrator is inexperienced, and doesn’t know, for instance, how much pressure to apply to the plunger. Tattooing eliminates such problems. Tattoo needles are small compared to traditional hypodermic needles, and are designed to puncture the skin superficially, potentially eliminating the discomfort and pain associated with intramuscular injections. And since puncture frequency is automated by machinery and puncture wounds naturally draw in fluid, tattooing may also reduce human error. One research cohort has designed microneedle patches with needles coated with vaccine to “tattoo” it into the recipient.  Such designs, which can be stuck to the skin like a simple adhesive bandage, can eliminate administration problems created by human error as well as the risk of disease transmission from needle handling and biohazard waste disposal. Solid vaccine patches are also easier to transport and store, as they take up less space than liquid-based vaccines.

It behooves the medical and research community to innovate when existing techniques fail; as a tattooed immunologist myself, it seems to me that developing tattoos for medical applications just makes sense. Tattoos, research, and medicine share a rich history, and the convergence of tattoos and science is a continuation of the human desire to explore and innovate—and beautify and prolong our lives.

If medicine is an art, then art too can be medicine.