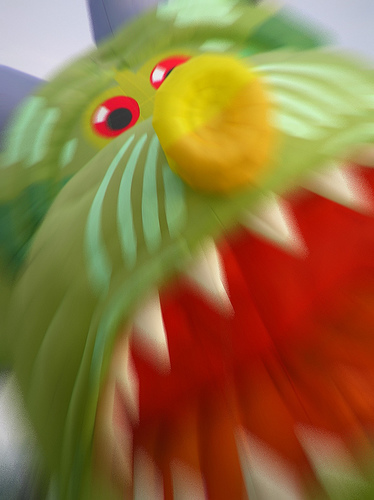 Matt McCutchin has spent two decades as a copywriter and associate creative director at ad agencies across the country. He has also taught advertising for 10 years, and is currently a lecturer at the University of Texas at Austin. “Weirdly enough,” he notes, “I began my ad career in one recession, and my teaching career in the next one.” Below, he comments on the latest economic crisis, and how it’s transforming advertising.

Q. Could you broadly characterize what’s happening in the advertising market? Are all forms of advertising – internet, print, search, television – contracting? Are some forms hit harder than others?
A. It does appear that more “traditional” media, such as newspapers, magazines, and “outdoor” billboards, are being hit particularly hard, while search marketing seems to be growing a bit. This is typical of the changes that occurred in previous recessions – clients shift their budgets into media that can demonstrate more immediate and easily-measurable results, like online and direct marketing. What is atypical is the speed – and depth – of cuts facing more traditional media.

Q. Are major advertisers – big products like Coke, for instance – cutting spending, and if so, where are they focusing their dollars?
A. Well, the Association of National Advertisers just released a survey that found that a whopping 77 percent of large advertisers are now looking to cut their budgets. Of those, 37 percent are planning to slash their budgets by more than 20 percent. Scary stuff.

Q. What are some strategies for advertisers to sell products in a recession, and what works best? What’s the long-run effect on the brand of offering such deals?
A. Offers and discounting are certainly the “old standby” tactics for dealing with recessions. However, there are certainly limits to these tools. Profit margins can’t be undermined over the longer term, for starters.  But the entire brand will eventually suffer erosion when you substitute a long-term strategy for short-term tactics. This became an issue in the early ’90s recession, when some advertisers found they had eroded their brand by couponing and discounting too aggressively. Same thing with the Big Three – the short-term tactic of rebates, introduced in the mid-’70s recession, eventually trained consumers to simply wait for the deal, and consequently helped diminish those brands over the years.

Q. In a recession, how do advertisers’ goals change?
A. I think smarter marketers will be shifting their efforts more into customer “retention” rather than “acquisition.” As we say here in Texas, “dance with the one who brung you.” However, many widely-held beliefs in the overall effectiveness of retention are being challenged – the old “80-20 Rule” is not perfect, for example.  Nowadays, it’s not enough to simply hang on to every customer – marketers can now figure out which customers are truly worth retaining and developing. Also, marketers should make absolutely sure that they have the best product or service at the best price, because that’s ultimately the only way to keep customers. For just one example, Starbucks didn’t just implement a loyalty program, Gold Rewards – they also spent a lot of effort shoring up their retail locations, including the infamous shutdown.

Q. Are advertisers changing the tone/approach of their ads? That is, how do you sell products to people who are reluctant to buy and sensitive about finances, especially if you’re selling luxury products like expensive cars or electronics?
A. I was just telling my students yesterday that as they develop creative campaigns for their portfolio, while they still have to create amazingly fresh creative work, they really have to think more than ever about a value proposition, too. I remind them of Maslow’s good ol’ Hierarchy Of Needs, and that someone looks at a product much differently when they’re happily in self-actualization mode than when they are freaking out about their paycheck and their mortgage and their 401k. I would hate to be advertising anything aspirational right now, because that’s a tough one.

Q. Can you name some brands whose advertising campaign has changed markedly during the recession, what they’re doing, and why it does or doesn’t work?
A. I just watched an Avon commercial that began with the obligatory “Are you worried about the economy?” and then talked about how, as an Avon rep, you can’t be laid off.  Very timely and unexpected. Advertising Age magazine recently profiled an effective campaign from Porsche, which targeted Smartphone users via weather.com and yahoo.com, and then advertised that yes, that person “can” afford a Porsche.  But my favorite example of an evolving campaign is Monster.com. They’ve gone from an aspirational “find your calling” message to the recent Superbowl spot that showed the guy in the plush corner office with the moose head, then revealed the poor working stiff in the office behind him, staring at the rear end of the moose.  For me, that spot totally captured the zeitgeist.   That and the Snuggie, of course.

Q. Will the recession diminish the power of advertising? If so, how, and do you expect it to swing back with the economy?
A. I do think there’s a huge backlash brewing against the blatant, debt-fueled materialism of the past few years, and advertising messages will have to evolve. However, human nature is what it is, and as long as part of our reptile brain craves shiny things, there will be someone out there selling them. I remember thinking the national mood might change after 9/11, but then we all went shopping like we were told.

Q. Do you expect consumer attitudes toward advertising to change during the recession? Will advertising seem more intrusive or more ubiquitous when consumers see it, even if advertising is contracting as a whole?
A. I think this recession will dramatically speed up an evolutionary process that’s already been happening for a good 15 years. That is, an “Advertising 2.0” that simply fosters dialogue between companies and consumers, rather than the current mass-media monologue model that’s existed since the 1800s. I tell my students that the biggest thing to happen to this business in ages may well be the little “thumbs up/thumbs down” buttons on Facebook ads, because then we’ll know instantly if we’re doing our job. I do think people will continue to ignore irrelevant and impersonal messages, perhaps more than ever, but the only way this industry will stay relevant is by doing less of those kind of messages.