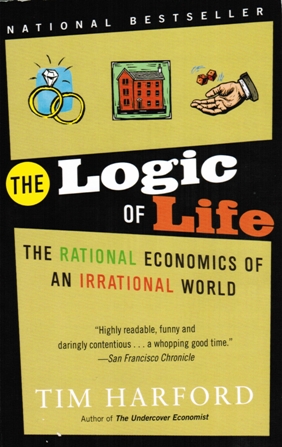 The Logic of Life: The Rational Economics of an Irrational World

Tim Harford has the answers to some of our country’s most vexing questions. Why is divorce so prevalent? Why are CEOs paid so much? Why are teenagers having more oral sex? Why do we flock to live in expensive cities? Why does racism persist? It turns out that the answer is always the same: because we are rational actors. The ways Harford arrives at the answer, though, involves several intricately designed economic studies, personal anecdotes and thought experiments, presented in easy-to-read language.

The men and women in Harford’s book are not of the coldly calculating “Homo economicus” kind – but they do, knowingly or not, make decisions based on rational calculations of cost. The costs aren’t always financial, as Harford notes in his first eye-catching example of economic thinking – the “rational blow job.” “The risk of AIDS,” Harford writes, “has probably encouraged teenagers to switch to a lower-cost substitute, oral sex. The threat to careless or unlucky girls that they will have to tell Mom or Dad that they accidentally got pregnant has done something similar.”

Harford tackles bigger questions with similar ease, offering explanations that, once read, seem obvious. Harford fits his own definition of good economics – “bold, brilliant, and oversimplified” ideas. A shareholder objecting to astronomically high CEO pay, for instance, faces a problem similar to a frugal diner trying to complain that someone at a big group dinner ordered lobster when everyone is splitting the check: the cost of the lobster (or the executive compensation) is dispersed enough that one person, unless they’re paying most of the check (or holding most of the shares), lacks the incentive or the influence to make a stink.

Something similar happens with farm subsidies: 300 million Americans may pay $6 a year more than they have to for sugar, but while the few who benefit from farm subsidies are willing to spend huge amounts of money lobbying, the millions who lose are far less likely to spend anything, even a few cents, on a counter-subsidy lobby. That is, it is rational in politics for the few to exploit the many.

More intriguingly, Harford also studies those decisions we imagine we make more by our guts than our heads – who to love, who to hate, and what drugs to take. Harford’s take on racism is bold, and depressing. He addresses what is sometimes euphemistically called “statistical discrimination,” by which companies use the average performance of a racial group to decide whether to make hires. Harford outlines an experiment in which employers were sent résumés of high to moderate quality, some bearing “distinctively black names.” The applicants with white-sounding names received 50% more requests for interviews. While some of the employers might have been simple bigots, Harford notes the true misfortune: “others…have a hundred applications to get through before lunch and experience teaches them that their time will pay better dividends if they spend more of it considering Brendans than Jamals.” That, in turn, Harford shows, makes it rational for black men and women to decide against investing in an education – that is, no matter how good their résumés, they won’t get the call back.

Harford also takes on the reasoning many cultural observers offer in response to visible racism – that African Americans stigmatize “acting white.” Harford easily dismantles this argument: “A black student who studies hard is acquiring the ability to escape from poverty, crime, and deprivation-and from those around him. That may not be popular. People don’t like to see their friends developing escape plans.”

There’s a rationality to love, too. Marriage, it turns out, is dictated by supply and demand. Speed-daters, for instance, will consistently propose matches at the same rate, even if, say, everyone who shows up is short, bald, overweight or undereducated. (A pair of intrepid economists created these precise scenarios.) An imbalance between men and women will spur a bargaining war between the more numerous sex, as Harford explains in an entertaining if alarming set-up called the “Marriage Supermarket.” And divorce happens in part according to a “reinforcing loop”: “Because divorce was conceivable, women preserved career options. But because women had career options, divorce became conceivable.”

As for drugs, it’s best to put it in Harford’s terms: “Getting married is not so different from getting hooked. It might not work out, it will restrict your future freedom of choice, and quitting if things turn sour is going to be extremely difficult and painful. But it will probably be a lot of fun, too.”

Excerpt: “A New York dollar is worth 61.2 cents….Now, clearly nothing is stopping anyone moving from Manhattan to Rock Island, or preventing immigrants or new college graduates from choosing to put down roots in Rock Island in the first place. But they don’t. Since we can assume these are rational people, that tells me we can also assume that Rock Island must really suck. (Sorry, Rock Islanders, it’s nothing personal. I know nothing about your town – except that you evidently can’t pay New Yorkers to live there.)”

Further Reading: The Undercover Economist: Exposing Why the Rich Are Rich, the Poor Are Poor–and Why You Can Never Buy a Decent Used Car!

and Predictably Irrational: The Hidden Forces That Shape Our Decisions