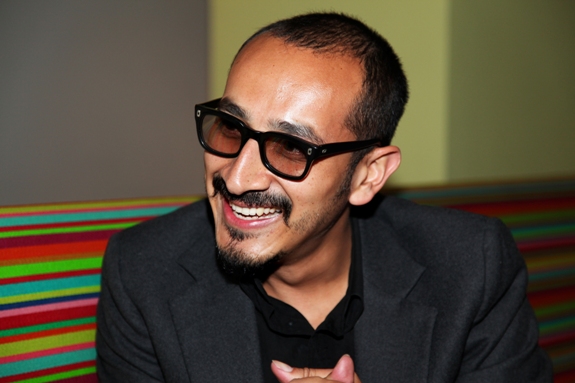 Daniel Hernandez is that rare guest who left one Zócalo for another. Traveling from Mexico City to Los Angeles to give his lecture on how Mexico survives, Hernandez reflected on the public space in his adopted home city. “I go there as often as I can,” Hernandez said. “You feel a sense of place and permanence and history, but also of dynamism.” Read about Hernandez’s thoughts on Mexico City, Los Angeles, and more below.

Q. What music have you listened to today?
A. A good friend of mine, an L.A. native, made me an L.A. mixtape. I got it a couple days ago and I’ve been listening to it nonstop. I wouldn’t be able to identify many of the artists on it, but there is Juana Molina, there’s some hip-hop, there’s some modern cumbia, salsa. I think it really reflects the way L.A. manages to merge and mesh lots of different sounds and cultures and rhythms.

Q. What is your favorite word?
A. Provecho. It’s a word in Spanish that’s used in Mexico to mean “bon appetit.” You say it to the strangers at the table next to you. Every time you sit down or get up you say “provecho.” To me it expresses the warmth and sense of community that exists where I live now. I try to say it here but it’s a little awkward.

Q. What was the last thing that inspired you?
A. Crossing the border last week was a very shocking experience. The border in so many ways is so elastic but it’s also a razor sharp line. When you’re in Mexico, there’s that improvisation, that freedom, that negotiation with other people. When you cross the border it’s like, the lanes are the lanes, the stoplights are the stoplights.

Q. When you were a child, what did you want to be when you grew up?
A. An architect.

Q. If you could make only one more journey, where would you go?
A. The Middle East.

Q. What is your favorite thing about Los Angeles?
A. The mystery and the membranes. The doors.

Q. What profession would you like to practice in your next life?
A. Professional dancer.

Q. How did you get into trouble as a child?
A. I was a good kid. I played by the rules.

Q. With which literary character do you most identity?
A. Probably a good picaresque, curious, restless, itchy kind of person.

Q. What is your most prized material possession?
A. A pair of boots.

Q. What promise do you make to yourself that you break the most often?
A. To be less impatient and judgmental.

Q. What should you throw away but haven’t been able to part with?
A. Piles of old newspapers.

Q. Who is the one person living or dead whom would you most like to meet?
A. Herman Hesse.