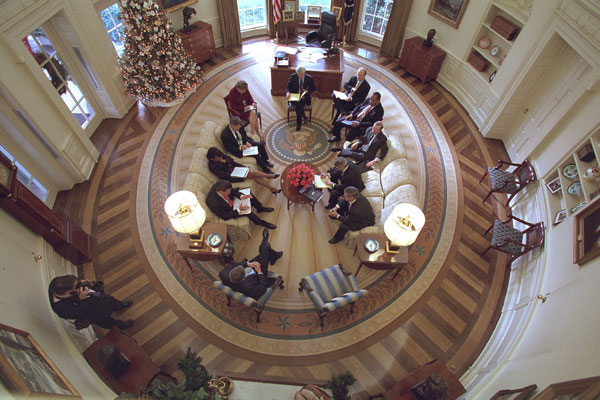 Three Kings: The Rise of an American Empire in the Middle East After World War II 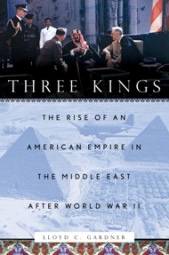 President Barack Obama’s months of deliberation on Afghanistan – which culminated in an announcement earlier this month of a troop surge – has been a fascinating process for the many pundits and critics who poke holes in his strategy. To be a fly on the wall in Oval Office conversations about national security and military strategy in the Middle East….

But very few could sneak into that party.

The curious might find some satisfaction in Lloyd C. Gardner’s Three Kings, a history of closed door meetings and great debate that surrounded presidents’ – albeit not this President’s – policies in the Middle East.

At the outset of the Cold War, President Harry Truman revolutionized American foreign policy, asserting that the U.S. should take the lead in the free world. Most significantly in this history, the U.S. began taking on a greater role in the Middle East as the British retreated. As the rhetoric went, Americans would defend free people, but the 1947 Truman Doctrine was also a “global ideological struggle” against a vague notion of communist enemies. It was a policy that allowed for “the kind of massive, unquestioned military/foreign policy spending that we still take for granted at the beginning of the twenty-first century.”

Three Kings explores the genesis and effects of this notion. It traverses the early days of American oil concessions in Saudi Arabia to the development of an air base crucial to the first Iraq war. It tackles Israel’s violent birth, the strategic importance of Egypt and oil crises in Iran. Gardner calls Three Kings “the missing part of my last book,” The Long Road to Baghdad. The most engaging parts of this sometimes fractured narrative are the dialogue and correspondence between some of history’s most animated characters. “FDR had returned from Tehran, meanwhile,” Gardner recounts, “rather thrilled with the idea of using Iran as an example of what we could do by an unselfish American policy.’ ‘Iran,’ he wrote Secretary Hull, ‘is definitely a very, very backward nation.'” It was in this frame of mind that President Franklin Roosevelt helped to draft the 1941 Atlantic Charter, a declaration of the United States’ and Britain’s commitment to self-determination in a post-World War II era.

Gardner’s history calls into question the idea that self-determination was America’s true aim in the Middle East. One Persian Gulf commander, Major General Donald H. Connolly, for example, expressed serious doubts – the Atlantic Charter used “moralistic arguments” to achieve simple control of vital resources in Iran. His dissent echoes loudly today, as Obama declares that nation-building and occupation are not the goals of the U.S. military mission in Afghanistan, and that the United States will not quit Afghanistan until there is a measure of security. Does the rhetoric match America’s interests, and does it match America’s intentions? Or, as Gardner quotes Connolly asking of Roosevelt’s policies, “Just how far was the United States willing to go, how much money was it willing to spend, and was it prepared, finally, to override the promises of national sovereignty…’to achieve the ideal of a peaceful relationship of nations’?”

Gardner writes that John F. Kennedy turned the Truman Doctrine “into fully imagined counterinsurgency theory,” and George W. Bush abandoned it all together in favor of “shock and awe.” The debate from the past rings loudly today, as Obama turns a page in American foreign policy in the Middle East, and as we continue to discover how far America will go.

Excerpt: “One goes down to the end of the road, warned Senator Walter George during secret hearings on the Truman Doctrine. Was this where it ended, on mountain trails searching out all the local Taliban and Al-Qaeda fighters who had spread across into Pakistan?”

and All the Shah’s Men: An American Coup and the Roots of Middle East Terror