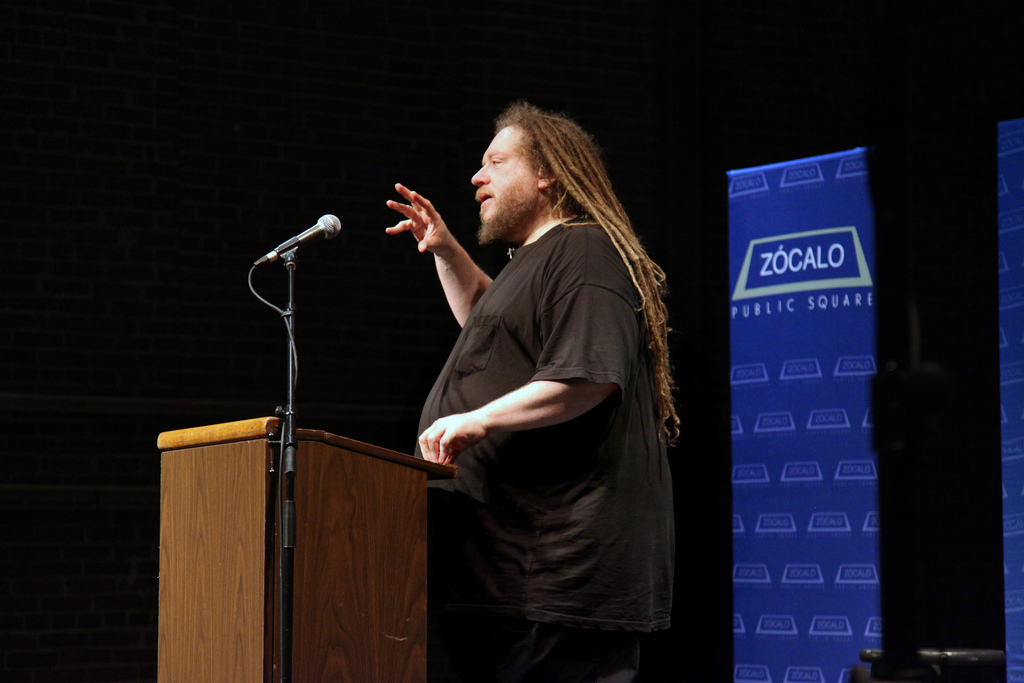 At the Actors’ Gang, Jaron Lanier greeted his audience as no other Zócalo audience has ever been greeted: “Hello, humans.”

It was an appropriate way for Lanier, a Silicon Valley visionary and author of You Are Not a Gadget: A Manifesto, to begin to explain why humans still matter in a computer-obsessed age. Exploring everything from what he calls the first computer – dating back to the ancient world – to why the iPad won’t save the world, Lanier argued that crowds may not be so wise, everything doesn’t need to be free, and the Internet needs a major redesign.

Lanier brought onstage and played what he termed the first computer – an instrument called the khaen, a mouth organ made of several interconnected pipes, which he picked up in Laos. The khaen, he explained, predates Western civilization, and “is the oldest thing made by people that has an array of similar things that can be turned on and off. It’s the first computer memory.” Ancient Romans made a much larger version, powered by steam and played by men hitting it with planks – the prototype for the pipe organ, and much later, the player pipe organ and player piano. “This,” Lanier said, brandishing the khaen, “is the evil seed.”

What Lanier termed the “first spot-on detailed description of the web” is more recent than the khaen, but still older than might be expected: it appears in E.M. Forster’s short story, “The Machine Stops.” “Go home and pirate it off something,” he joked. The story is a dystopic one in which “people feel their lives have been leeched, that they’re not as real as they used to be. At the end, the good news is, the machine breaks down. Everyone goes outside and sees the sun.” 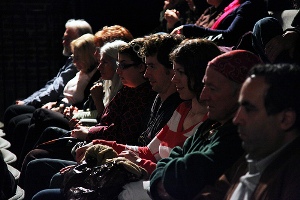 Lanier emphasized that no matter how flawed the Internet, he wouldn’t want the world to go the way of Forster’s story. He credited the Internet with revealing something startling good about mankind in the 1990s – that humans, given the chance, “cease being purely receptive couch potatoes and would instead become expressive, creative people.”

But “a sour, smelly rind grew on the surface of this beautiful thing called the Internet,” he said. “I am partially responsible for it.” About 20 years ago, Lanier was among a circle of thinkers who argued that artists should give away their work for free – that being paid for self-expression was bad for humanity. Today, he said, it seems that a generation of artists has been lost, unable to make a living without being paid for their work. Musicians, Lanier noted in Q&A, can’t tour forever if they want to have children; they can’t sell T-shirts if, eventually, sophisticated technology will let anyone make any T-shirt at home.

The notion of computers functioning for humans and better than humans, isn’t a new idea, Lanier explained. In the 19th century, as industrialization moved at the pace of “a steam-driven, gear-operated version of Moore’s Law,” people began to fight against being replaced by machines, from the railroad-building robot to the loom. “There was something about human dignity at stake,” Lanier said. “People shouldn’t think of themselves as disposable parts who are worthless once the right machine comes along.” Karl Marx understood this dynamic, Lanier explained, calling him a “tech writer” but saying that, like Forster, he came to the wrong conclusion about the course of the future.

The writer who got it right, for Lanier, is H.G. Wells in “The Time Machine.” In the world of the story, no one has to work, and humankind divides into those who benefit from the system and those who don’t.

The Wiki president and the anti-Eve

Lanier blames our tilt toward Wells’ vision on two tendencies. One is the urge to confuse anarchy and democracy. “It’s very natural to say everything be as open and as free as possible,” but if it were so, Lanier said, “You end up actually closing things off.” Evolution couldn’t happen quickly and complexly without cell walls, and every president gets four years between votes. “If Wiki were running the government you would have total chaos of everything, always,” he said.

The worst examples of human behavior, Lanier said, occur when humans act as mob members rather than as individuals, which democracies tend to cultivate. The desire to join a mob is within everyone, Lanier said, citing the pack mentality of “people in the comments section of a blog.” Though crowds can have wisdom, particularly when it comes to coming up with discrete, numerical outputs, they can’t manage a complex, or inventive idea: “We have a term for that: design by committee.” 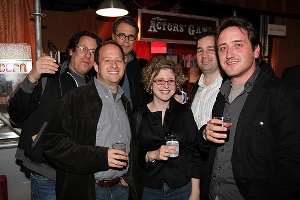 The second tendency is newer, Lanier said, “a new religion…that is just for digital geeks,” the belief that in another decade or so, as computers learn to improve themselves, all human consciousness will be subsumed by a computer. Humans, then, would live in the computer, freed from bodies, aging, and death. The idea comes in part from Alan Turing, one of the principle inventors of the computer, Lanier said. Turing wrote of a thought experiment shortly before killing himself like an “anti-Eve” with a cyanide-laced apple:  he imagined a computer that could behave like be indistinguishable from a human. The kernel of the religion – and any religion – was in this denial of death, Lanier said.

Today, the moment computers take over – the Singularity – is a popular concept in the tech world, Lanier said, espoused by many of his friends. “It’s a very peculiar life I’m leading at the moment.”

The belief in the Singularity leads to “crap code”, Lanier argues, that imagine the computer to be humanlike, or better than humans. Microsoft Word attempts to predict its user’s wish to create an outline, he noted, and teachers under No Child Left Behind are made “stupid to make an algorithm seem smart.” Search engines are designed to seem to have an intelligence – a sense of what the user wants.

Web 2.0, Lanier said, is “the biggest ritual of the human erasure machine.” All speech is broken down and de-contextualized, except advertising, and privacy becomes theft – because information is sold to advertisers, Lanier argued. “I just have to talk Google into giving up the advertising model. The only problem is all these shareholders,” Lanier joked.

And unlike Google, Facebook and Twitter, Lanier argued, aren’t even real businesses, but rather “just pure ritual…to erase people, to create the illusion that the net is coming alive.” Facebook could be seen as particularly insidious to art, Lanier noted. “Twain, Keroauc, Dylan on Facebook – they wouldn’t have been able to reinvent themselves. We would have lost them. You can’t move to a new town. You can never afford to turn it off.” Young people “use it out of fear instead of love,” he said, to manage reputations rather than for free self-invention, creating a “cheerful conformity.”

And while the iPad may help the publishing industry in the near-term, Lanier said, it remains a “walled garden,” like iTunes for music and Amazon for authors. “The only way forward is a universal micropayment system, so you never have to cross over a barrier, and anybody has democratic access to becoming a seller,” Lanier said. “Google’s going to hate it. Apple’s going to have a problem with it. It’s gotta happen.” 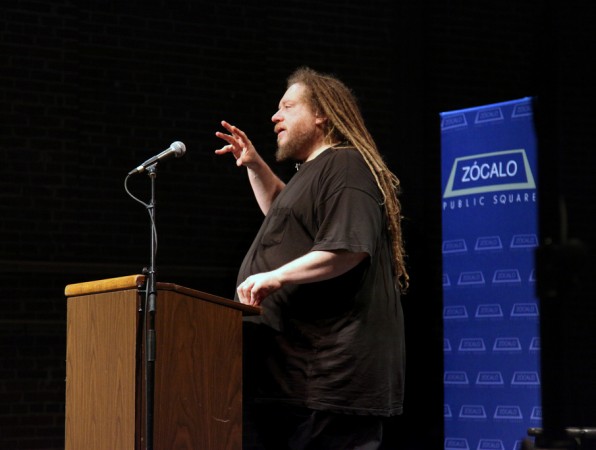