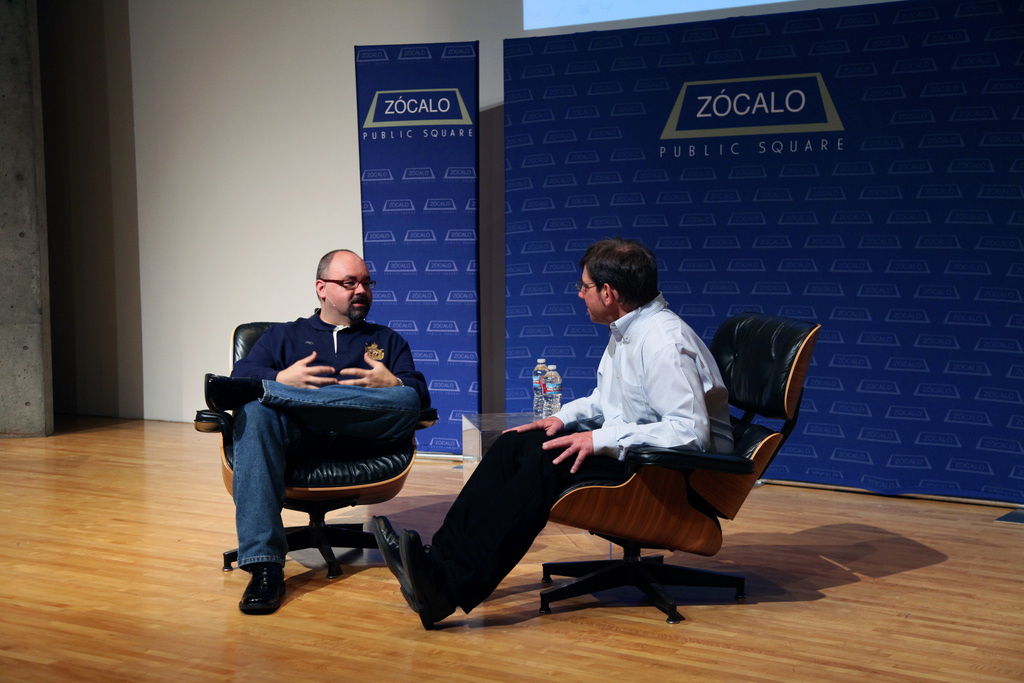 Three-dimensional movies and multiplayer video games may be flashy, but, according to Rick Kleffel, one technology has them beat – the age-old mechanism of reading. Reading, he said, is “a primal force in which we the readers collaborate with the authors to create characters, adventures, empathy and memories not unlike those of our real lives.”

Kleffel, who runs the book review site The Agony Column, visited Zócalo to chat with Carlos Ruiz Zafón, author of The Angel’s Game and The Shadow of the Wind, whom he called “one of our most read and best loved writers.” Zafón, whose books have been translated into more than 40 languages and published around the world, chatted about his life, his inspiration, and his work.

Zafón recalled that as a child, he was constantly writing. “What always interested me is language, codes, systems, structures – I wanted to figure out how those things work,” he said. From music to numbers to words, each code expresses ideas and emotions, Zafón explained. Storytelling, to him, was the most magical of these codes. “Just with ink and paper you could create stories and worlds and universes.”

But inspiration wasn’t exactly easily at hand, Zafón said. “Sometimes I wonder when people say inspiration hits them – as if it were a truck or something. It never happened to me.” He described writing as hard work, if satisfying when it’s done. “I’m squeezing my brain to come up with something, and I’m struggling against my limitations.” As he noted in Q&A, he “rewrites everything to death” and behaves, when figuring out a story, “like a shark circling its prey.”

Zafón explained how he began to learn his craft – first by reading, analyzing, and mimicking stories he loved, including the visual stories found in film, comic books, photography and elsewhere. “You have to work and work and work. A writer should write thousands of pages no one’s going to read before you earn the right to write one page that deserves somebody’s time,” he said.

Zafón launched his career writing young adult books. “I kept working in that field because I was too conservative, and kind of afraid of jumping from a train that was moving somewhere,” Zafon explained. “I always felt I was faking it and one day the police would knock on my door at 2 a.m. because I was impersonating a young adult author.” Zafón’s book had complex, potentially “creepy” themes – along with classic literary storytelling elements. Kleffel noted that adventure stories targeted to boys feature “monsters and gods and the supernatural,” the same elements of most basic religious myths. Ultimately Zafón said, his stories are for anyone who likes reading. “I don’t card people. If you like books, you like to read, you’re in.”

Zafón’s The Shadow of the Wind and The Angel’s Game are both stories about stories. But they differ in significant ways, he noted. The former is told from the perspective of the reader, and is a “sweeter story” about falling in love with literature. The latter is about the storyteller, who is essentially “descending into madness,” Zafón said. One’s about redemption, the other is about damnation. “The Angel’s Game is a feel-bad story. it makes you feel bad about the world and bad about yourself,” he said.

Zafón’s works have a few other common elements, Kleffel noted. One is the character of the wish-granter, who offers to fulfill dreams, for a price. Zafón agreed, noting that such a figure “is a mirror of elements in our nature.” Our choices make us who we are, he emphasized, noting that The Angel’s Game is a classic Faustian tale. “This wish-granter appears and says, ‘What are you willing to do?’” Zafon said. “Those are interesting questions for characters and for storytelling.”

Another common element is the character of Barcelona, where Zafón was born and raised. Zafón noted that some of his favorite authors – Raymond Chandler, Charles Dickens – turn place into a character that plays a dramatic function.  Our notions of Victorian London, Zafón argued, comes from Dickens because his images “were so powerful and so stylized they transcended reality.”

And finally, as one audience member noted in Q&A, well-written women are common in Zafon’s work. “I find women more interesting than men. They’re more complex creatures,” Zafon said. Though, he added, “I don’t have the pretension to try to understand what is going on in a woman’s brain, but the creatures interest me.”

Zafón’s plots and dialogue are key to his work, both well-developed and complex, Kleffel noted. Zafón emphasized that dialogue and action are crucial to character-building, and are the best way to engage readers. “You can’t just say that guy is bad because he has bad thoughts and bad feelings,” he said. “We have to know this is the bad guy because he is doing bad.”

As for his highly-structured plots, Zafon said, they illustrate “a little bit how my mind works.”

“Language is essentially a software of the mind,” he said. “What tells you who a person is, how they think is how they create a structure.” 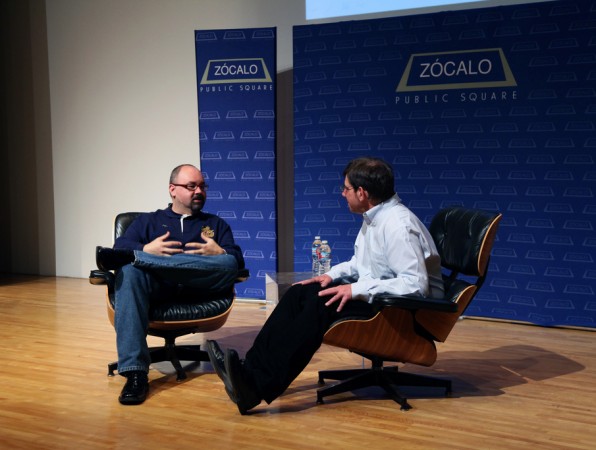