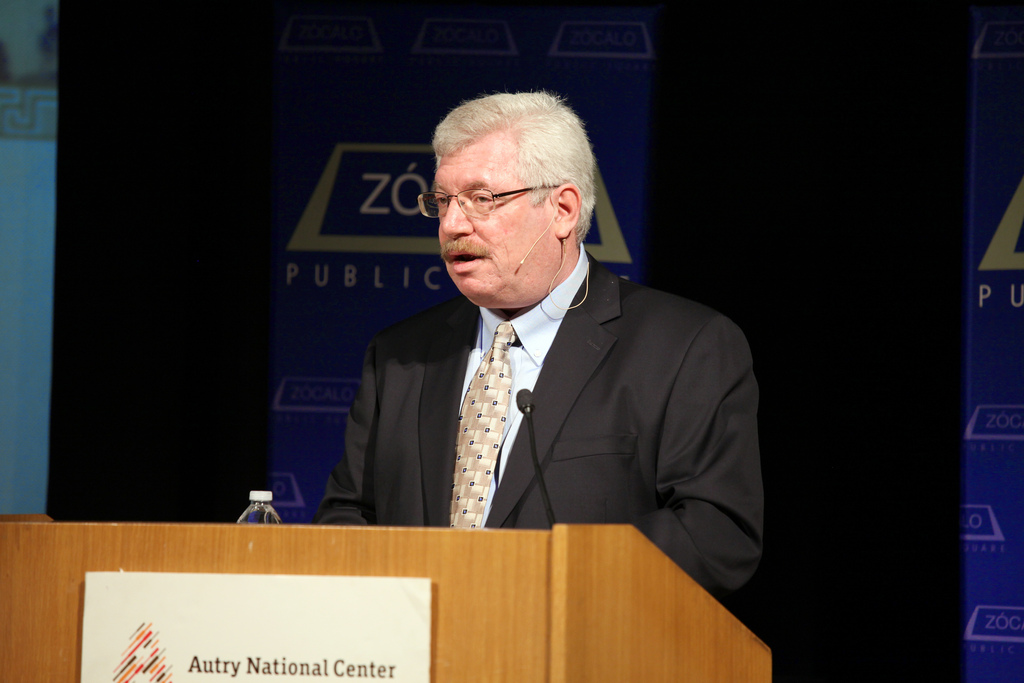 As Michael Hiltzik, author of Colossus: Hoover Dam and the Making of the American Century, explained, the battle to name the dam spanned 20 years and several presidential administrations. Options included Boulder Canyon Dam or simply Boulder Dam, even though the dam was 20 miles downstream in Black Canyon. In 1947, a Republican-majority Congress voted to put Hoover’s name back on the Dam, prompting so much controversy that one frustrated Nevadan wrote in to his local paper suggesting the name, “Who Gives A Dam.”

“Why should we give a damn?” Hiltzik asked the crowd at the Autry National Center. Even decades later, he said, “There are lots of reasons.” Besides its stunning beauty and power, Hiltzik said, the Dam transformed – and still influences today – the American economy, the West, and the way we interact with nature.

The Great Depression, according to economist Alexander J. Field, was also the most technologically progressive decade of the 20th century. The Dam may have been the capstone, Hiltzik said, but the decade also saw the construction of the Golden Gate Bridge, the Bay Bridge, the Lincoln and Holland Tunnels, and the Pasadena Freeway, all groundbreaking additions to the national infrastructure with roots in local or regional requests. Each required a massive federal government investment – a dramatic departure from past federal budgets. Before 1930, Hiltzik explained, the average federal public works budget was $150 million. The Hoover Dam cost $165 million alone. “We should tip the hat to Herbert Hoover, who showed the way,” Hiltzik said.

The Dam also transformed the way the country addressed unemployment, which until the 1930s was long regarded as a city and state problem. By the start of the Depression, the 15 or 20 states that had unemployment programs were strapped for cash, and appealed to Hoover for help. Hoover tried to “jawbone” major industry executives to hold the line on wages and employment, Hiltzik said, but executives reneged on their promises. But Hoover also decided to step up government construction. “The call went out for what we today think of as shovel-ready projects.” The one project that was well along in design – signed into law by Calvin Coolidge – was the future Hoover Dam. Ten thousand men were put to work at four to six dollars a day, in conditions bad enough to spur the first-ever workers’ strike, as men died of heat stroke and carbon monoxide poisoning. As Hiltzik put it, it was “some of the most hellishly difficult and dangerous work in creation.” 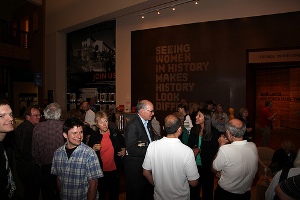 The story of the Dam starts long before the Great Depression, as Hiltzik noted. The Dam was conceived to address a Southern California emergency – the Great Flood of 1905, which inundated Imperial Valley. That region was already producing $2 billion a year in fruits and vegetables after marketers renamed it. “It’s very hard to attract people to raise crops in some place called the Colorado Desert,” Hiltzik joked. The flood inundated the valley, destroyed Calexico and Mexicali, and created the Salton Sea. Putting the river back to its normal path took two years and $3 million, courtesy the Southern Pacific Railroad. Theodore Roosevelt promised the company a repayment that never came, but pronounced in a landmark message that the Colorado had to be tamed, and that the only entity capable of doing it was the federal government.

Political opposition blocked the dam for 20 years, Hiltzik said. The Los Angeles Times editorialized vehemently against it – the paper’s owners, Harrison G. Otis and his son-in-law Harry Chandler, knew it would shut off irrigation to 800,000 acres they owned in Baja California and Sonoma. The other major opponent – the private utility industry, then known as the power trust – wanted to protect itself from what it saw as a rising public power movement, especially after Los Angeles had seized Edison Company’s electric grid to create what we now know as the Department of Water and Power. The trust, Hiltzik said, went as far as to bribe Congress, pay college professors to rewrite history textbooks, and secretly sponsor municipal orders to kill public power programs. As Californians were still at the polls voting on a quite similar PG&E-sponsored proposition that night, Hiltzik said, “This should sound eerily familiar to you.”

But opposition quickly died down. “The power trust outsmarted itself,” Hiltzik said, and was exposed by the then-weak Federal Trade Commission. Hearings and leaked documents revealed the trust’s bribery, and Congress – particularly at the urging of California’s progressive Republican Senator Hiram Johnson – swung in favor of the Dam. More unexpectedly, Hiltzik said, the Los Angeles Times turned around. Chandler and Otis were bailing out of Mexico as a new government started seizing their land, and one William Mulholland “got Harry Chandler’s ears.” 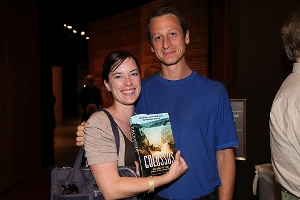 Mulholland got involved in what was being called the Boulder Canyon Project in 1926, when funding wasn’t clearly available. The government knew that eventually hydroelectric power would sell, but the likeliest future buyer – Los Angeles – was 300 miles away, and then just a small city. Mulholland visited Congress and said, “Gentlemen, I’m going to inject a new element into your discussion.” Los Angeles was suffering from a devastating drought, he said, and needed all the water it could import. The city would build its own aqueduct that would require great energy to pump water over mountains. “Gentleman,” Hiltzik quoted Mulholland as saying, “We’ll buy every kilowatt.” Mulholland envisioned a big destiny for his city and promised to buy even more power than needed to pump the water. Back in L.A., he reminded Harry Chandler that his family’s future-  its newspaper and real estate holdings – was tied up in the future of the city, and so his support of the dam was essential. With the Dam’s two biggest foes defeated, Congress passed the project and Calvin Coolidge signed it into law in late 1928.

From Hoover to Kaiser

Work began on the Dam earlier than planned, in mid 1930. “Black Canyon rang with the sound of jackhammers and railroad cars and trucks and dynamite blasts 24 hours a day,” Hiltzik said, falling silent only on the Fourth of July and Christmas day. It was twice the height of any dam built to date, and required more concrete than all the other dams the U.S. government had ever built. Engineers had to invent new equipment, construction techniques, and types of concrete as they went along. A new technique of cooling concrete prevented the Dam from staying too hot. “Otherwise the Dam would still be cooling today, and for another hundred years,” Hiltzik said.

The first national lab in American history was built to house such innovation, and an entire test dam was made and destroyed. The builders who won the contracts became nationally famous tycoons – Henry Kaiser and Warren Bechtel. They charged workers a few dollars a month for medical care in a system that would eventually become Kaiser Permanente. Hundreds of thousands of Americans came to watch the Dam go up, as did engineering delegations from abroad. Twenty-nine more hydroelectric dams would be built as part of the Tennessee Valley Authority, including seven more on the Colorado River, tapering its once mighty flow to the Gulf.

Five years after work began, on September 30, 1935, Franklin Roosevelt came to the Dam, in 120 degree heat, to dedicate it before 10,000 spectators. Roosevelt knew its totemic power when he spoke of “the spell it would cast on every visitor.” Roosevelt dedicated the dam – conceived, approved, and launched by his Republican predecessors – in the name of the New Deal. “Well,” Hiltzik said, “he was a politician.” 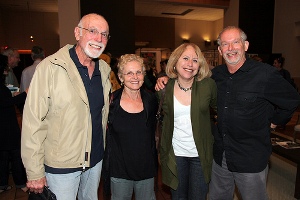 The Dam became a landmark achievement, reflected upon in times of crisis and at times of achievement – from the interstate highway system to the moon landing. The pattern of federal management and private enterprise would be repeated over and over, until today.  A million tourists visit it every year; movie directors and advertisers use it as a backdrop. The West relies on it, and Los Angeles, San Diego, Phoenix, Denver, and Salt Lake City would not have been possible without it. About 40% of Angelenos’ water comes thanks to the Hoover Dam.

The Dam has a darker legacy as well, Hiltzik said. The trickle of water granted Mexico – with which the U.S. had no treaty governing water rights when the Dam was built – remains a sticking point in foreign relations with the country. Lake Mead is far below its usual level, a symbol, Hiltzik said, of “how we sometimes allow technology to promise us too much, how we sometimes forget that everything has its limit.” Even in 1893, Hiltzik said, one explorer with knowledge of the Colorado announced at an irrigation conference, “You are piling up a heritage of conflict and litigation over water rights.” Even the Colorado River couldn’t answer all that demand, Hiltzik said – of farmers who planted the thirstiest crops, of cities that sprawled, of fishermen who thought they could fish forever, of homeowners who water their lawns daily. “Now we’re in the era of limits,” Hiltzik said, and even so, people want more dams, “as if you can create water where there isn’t any.” 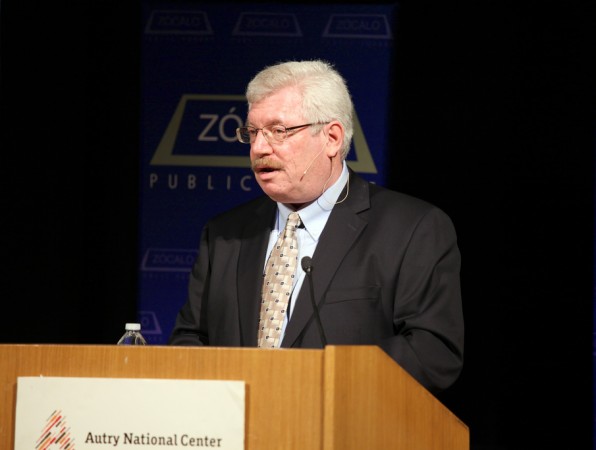