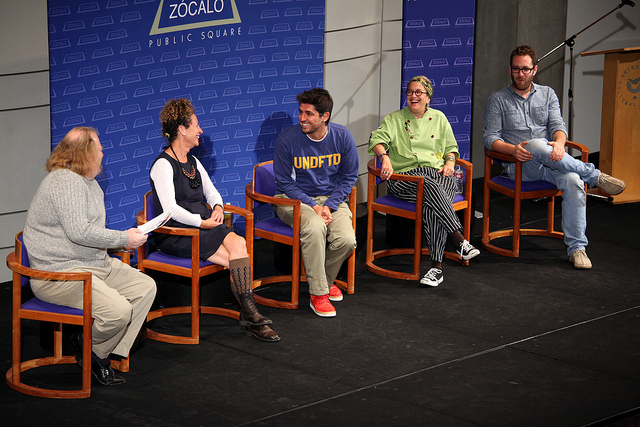 Los Angeles may have given the world its first celebrity chef – Wolfgang Puck – but it’s also nursing something of a backlash.

As LA Weekly food writer Jonathan Gold explained, the Los Angeles City Council, in deciding whether to bring new restaurants to the Los Angeles International Airport, had “a note of contempt in their voices” as they discussed celebrity chefs. “As opposed to the good hardworking union people who have been turning out perfectly dreadful food for years,” Gold joked with the crowd at the Skirball Cultural Center.

Celebrity chefs – and how people regard them – are in flux, as their ranks stretch to include not only experts of a craft perfected over years or decades, but telegenic brand names benefiting from instant fame. Gold joined renowned chefs Nancy Silverton of Mozza, Ludovic Lefebvre of Ludobites, Susan Feniger of Street, and Ilan Hall of The Gorbals to chat about what makes a celebrity chef and whether TV is a force for good or evil. 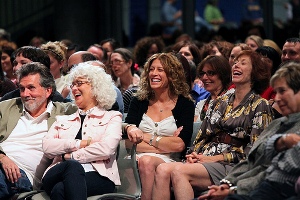 Three of the four panelists had significant television experience. As Gold noted, Feniger is “maybe more than anyone in the country a veteran between the sort of pulls between being a TV chef and a restaurant chef.” Feniger cooked with Julia Child on camera, did a commercial for Crisco, and joined the Food Network in the station’s infancy to host hundreds of episodes of “Too Hot Tamales.” “Everybody that couldn’t sleep watched us,” Feniger said. “It brought us more awareness than an article in the L.A. Times.” She noted that the show also brought her business outside of prime dining hours, as early as 6 p.m. “I think of that as breakfast,” she joked.

Feniger went on to compete on Top Chef Masters, much like Lefebvre, who clarified, “I was on ‘Top Chef Masters’ two times and I lost two times,” before suggesting he wasn’t really a celebrity. But as Gold pointed out the last incarnation of his pop-up restaurant “sold out in 20 minutes and crashed OpenTable.” Lefebvre, who goes by Ludo, explained that the restaurant concept was a friend’s idea, of “a walking fine dining room” that would be affordable, accessible, and grant Lefebvre more freedom than he had elsewhere. And while he trained extensively alongside some of the best French chefs, and worked stints at L’Orangerie and Bastide, the pop-up restaurant and television were key to his popularity. “They make me look like a crazy French guy. On TV, they cut a lot, a lot, a lot – but I guess it made me famous,” he said. And as for his avid tweeting and legions of followers, he said, “I like to tell people what’s going on. I woke up in the morning, my wife pissed me off or my fish got stuck at the border…. I want people to see the real life of a chef.”

Hall went from being a line cook to a television star in a matter of months, going on to win the second season of Bravo’s “Top Chef.” “I’d heard it was the one that’s not embarrassing to go on,” Hall said. But the process was still an unusual one for him. “We did competitions at work late at night – after we’d drunk alcohol,” he joked. During and after the show’s run, he found fame – fans watching him work through the windows of a fishbowl-like kitchen in New York – and the opportunity to open a restaurant in Los Angeles, The Gorbals. “I was given the ability to do it, and people would come, so it wasn’t just stuck in the back of a Section 8 housing unit and I’d just be sitting there by myself,” he said. Like all the panelists, Hall noted that Los Angeles’ nurturing community of chefs made it the ideal place to launch his restaurant – rather than its celebrity culture. 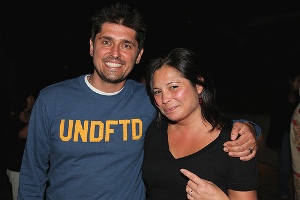 Silverton was the lone voice of television reluctance. She also tried TV with Julia Child, like Feniger. “They stopped me every three words. I was covering the bowl, I was looking up, I was looking down. I had a full loaf of bread out of the oven and it was ice cold and I had to say it smelled so good,” she said. “I walked away and said I would never ever ever do it again.” But, she noted, “I’m really proud to say that I was there when the celebrity chef was born, and that was Wolfgang…. Everyone in the country knew what Spago was.”

Still, Silverton insisted she wasn’t a celebrity because she hasn’t been on a prominent-enough TV show, and because she’s not recognized by people outside of Los Angeles. As she said to Ludo, “When I go someplace, I still need to use my last name, do you?” Gold said everyone in West L.A. knows who “Nancy” is, but, Silverton replied, “Drew, Sinatra….”

Silverton also expressed concern about the negative aspect of celebrity chef culture. She criticized television cooks who aren’t knowledgeable about food. “They don’t have anything to teach us,” she said to applause. “They can tell us to add basil because it’s pretty.” (Silverton and Feniger both noted that they don’t watch cooking shows.) Young would-be chefs want to be instant stars and don’t want to put in the time to develop skills, the panelists noted. Many don’t even know how, as Lefebvre said. “That’s what pissed me off the most. We all work so hard. I worked for 25 years in the kitchen.” 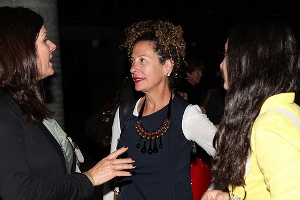 But as Feniger asked of the sudden fame, “Will it last? My guess is it won’t. They won’t be there in 25 years. That will wear off if the talent isn’t there.” And in any case, as Hall noted, stars of food television aren’t always intended to be taken as chefs. “It’s their personality and their likeability,” he said. “People at home can relate to them…. they don’t necessarily want to watch a professional chef cooking professional chef’s food.”

Still, Silverton admitted that television can help a restaurant, noting Feniger’s experience. “I think you did have a lot of fun in the end, but I know you did it because it was a business choice,” she said to Feniger. Feniger joked that she agreed to do it with only one hope: “I just don’t want to lose in round one.” (Lefebvre, who did lose in round one, shook his head, to a laugh from the crowd.) When she suggested that you can’t take it too seriously, Lefebvre responded, “It’s a competition, it’s a competition, it’s a competition.”

But Feniger conceded to Lefebvre one particular skill with diners, who have been known to wait hours for a few bits of Lefebvre’s fried chicken, “It probably makes customers way more patient when they go to restaurants. It’s a great idea.”

Lefebvre agreed. “They won’t mind waiting one hour when the wait for my truck is four hours.” 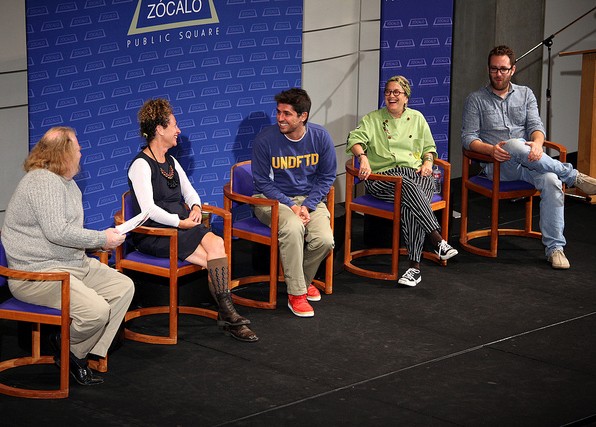