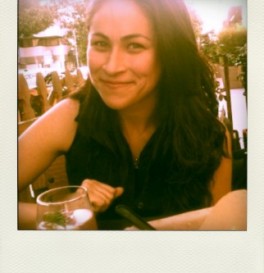 What is it about the moment you arrive at your first college dorm room and meet your roommates while unpacking your stuff? That’s a scene seared in most people’s memory, the fodder of countless movies and novels to shorthand life’s most exciting, but often wrenching, transitions.

For Christina Sánchez, South L.A. native and graduate of venerable Immaculate Heart High in Los Feliz, that moment, her landing at Yale, was a revelation. Sánchez vividly recalls how, during the pleasantries between new roommates and their families, she was struck for the very first time by a simple fact that would have long been obvious to anyone else: “I realized that my mom has an accent.”

Sánchez, 28 and the oldest of five sisters, was the first in her family to go to college. Her roots are firmly in Mexico’s heartland; Mom hails from Zacatecas and Dad from Jalisco. She loved Yale, loved it so much she stuck around for an extra year working in the admissions office to recruit more Southern California kids. What she seems to have liked the most about the place was its culture of do-goodism: roughly 70 percent of students volunteer for social service programs.

“Yale politicized me,” she says. “It was in New Haven that I became an angry Chicana.” She realized she hadn’t been taught enough about her heritage till then; she gravitated towards on-campus Latino groups and soaked up the MEChA (a national Latino student organization) cant of a conquered people needing to reclaim, in some symbolic sense, the mythical land of Aztlán (most Mexicans would settle for getting California back). As a double major in history and “ethnicity, race and migration,” Sánchez’s senior thesis was on the development of a Latino political consciousness north of the Rio Grande that identifies with the struggles of Latin American nations.

But hold on. She’s not serious about all this anger – or is she?  We’re sitting outside on a sunny Wednesday afternoon, picking at “street-cart” fries and hummus and downing sangrias – no pitcher, alas, as she went rosé and I went red – in Little Tokyo, at Spitz’s “Not Unhappy Hour.” This has to be reason 4,308 to love L.A.:  In what other city would Spitz, the Turkish fast-food joint wanting to be a hip bar (or is it a hip bar with fast-food aspirations?), “home of the Döner Kebab,” find itself in Little Tokyo, serving up fantastic sangrias?

Reason 4,309 to love L.A.: Sánchez says she really had wanted to meet in a Boyle Heights bar called Eastside Luv, but it doesn’t open till 8.

Nothing about Sánchez screams “angry Chicana.” She exudes a graceful, I-have-this-all-figured-out demeanor – she’s centrada, they’d say back in Zacatecas – and the more she carries on about her supposed anger, the more disarming and conspiratorial her smile becomes. Her talk of collegiate radicalization is laced with ironic wisdom, but of the kind that usually kicks in a lot later. “Ah, those crazy college days,” she seems to be saying, though she is only 28.

I am squinting partly because the sun is in my eyes, but Sánchez senses my confusion.

“Should I really be pissed off?” she asks, helpfully.  “And make it my mission to reclaim Aztlán for my ancestors?” The smile widens and her brow furrows as she cocks her head sideways, somewhat playfully. “Probably, yeah,” she says, after a dramatic pause. “But really, I have found better ways of channeling my anger.”

Indeed, Sánchez spends her days working to trigger a revolution, literally. She is a community organizer for Parent Revolution, a non-profit created to empower parents of kids in failing schools to force change, as encouraged by California’s “Parent Trigger” law and the Obama administration’s education policies. The details and regulations of how this so-called trigger should work are in dispute these days, but the basic idea behind the legislation is that a majority of a school population’s parents can force an intervention at a school, demanding that it convert to a charter, be transformed by current staff, turned around by a new team, or shut down altogether. McKinley Elementary in Compton was Parent Revolution’s first major coup, as a majority of its families signed a petition to force change.  It’s become the test case of California’s trigger law, but Sánchez and her colleagues have moved onto organizing other communities and other schools.

Sánchez knows what it’s like to be in classrooms devoid of much hope, having been an L.A.-based Teach for America corps member after her stint in Yale’s admissions office. She taught social studies and history to 6th graders at Belvedere Middle School, but usually couldn’t use the textbooks, except for the photos – many of her kids’ English skills were that bad. “It was tempting to break the law and switch to Spanish at times,” she recalls. She lost her voice the first year, and it still gnaws at her that there was one kid in her class whose voice she never heard; the one who got away.

But it might have been the chairs, or lack thereof, that turned Sánchez into a revolutionary. Picture an idealistic Teach for America foot soldier, fresh off the Yale campus, walking into her first day of class to discover a room with 30 chairs and 40 confused sixth graders looking at her with a quizzical “What are we going to do now, Ms. Sánchez?” look. Sánchez was outraged at the complacency of the bureaucracy around her, at the acceptance of mediocrity. She doesn’t strike me as someone who’d ever be caught quoting George W. Bush, so I will say it for her: She was shocked by the “soft bigotry of low expectations.” (c’mon, there had to be one memorable line in eight years). Some kids had to sit on the floor until “norm day,” the day in October when classes were balanced, and things settled down or “normalized” for the rest of the year.

Sánchez admires what Teach for America has accomplished, the opportunities it provides for bright kids to teach, but she is uneasy about people’s tendency to romanticize the experience as if it were akin to being in the Peace Corps, a favor rendered to humanity before law school. “It was the hardest thing I probably will ever do, yes, but it is a good job and a good profession.” More could be done, she thinks, to encourage TFA participants to continue teaching.

After considering teaching as a career (despite TFA’s lack of encouragement), Sánchez decided instead that she wanted to work on transforming her community’s expectations and inciting its engagement. She obtained a master’s degree at Harvard’s Kennedy School of Government to bolster her policy chops and learn the art of political organizing. “What you learn is that it really is a craft, as opposed to a set of magic formulas.”

Sánchez, now Parent Revolution’s deputy organizing director, explains that building relationships and leveraging existing communities of interest are the key to her work. We tend to think of Angelenos as living extremely disaggregated lives, but Sánchez points out that there are endless varieties of communities and networks – men coming together to root on the Chivas; comadres to gossip; congregations to worship, and so on. Sánchez reaches out to those communities, often bringing a PowerPoint presentation to neighbors’ living rooms in the evenings to preach the gospel of parental involvement and empowerment.

There is a stereotype of the disengaged parent in the city’s low-performing schools, and Sánchez acknowledges that there is some cultural truth to that.  Getting engaged in their kids’ school is intimidating to immigrants who are struggling to become fluent in English and never got far in school themselves. What’s more, they often bring from Mexico and elsewhere a deep-seated reverence for authority and teachers. El maestro commands such respect in Mexican life that Sánchez says parents she tries to organize will often look at her with concern, and ask her why she’d quit the honorable teaching profession to be a community organizer.

Still, Parent Revolution’s message is getting across, judging by the group’s success in Compton. “These parents often don’t know how bad things are,” Sánchez says. Conveying that, then raising the community’s expectations, can be more than half the battle. The goal is to have parents’ unions, as the sole interest group exclusively concerned with the kids’ education, counter the wrangling by administrators, politicians and teachers’ unions over turf, job security, contracts and political patronage.  Speaking of unions, Sánchez says she has been taken aback by how much of school reform advocacy is about having to take sides, taken aback by the vitriolic antagonism of the California Teachers Association.

“Did you ever think back in your radical Yale days that you’d become anti-union?” I ask. Her answer:  a “don’t be naughty now” smile.

We move on to Sánchez’s living arrangements, which are unconventional for someone holding two Ivy League degrees: She is living back at home in Central Vernon, south of downtown, with her parents and all four sisters, which would be quite common in Mexico. There is nothing apologetic about this admission; in fact, it comes across as more of a “how cool is that” boast.  The family still tries to go to church together every Sunday.

Sánchez calls this an exciting time to be involved in school reform, though she gets annoyed that too many people involved in community activism “talk down” to the city and want to “fix” it as scolds, rather than improve it as devoted L.A. fans.

She is plugged into a broader network of community activists, but is also comfortable interacting with plenty of other L.A. subcultures, including Yale friends trying to make it in Hollywood who tend to hang out in Los Feliz. She even cops to spending time on the Westside.

So what’s next for Sánchez? Smart, charismatic, savvy, and with hugely impressive credentials at the age of 28, she could clearly be a big player in this city’s future.

“Too many of my generation are ‘next steppers,’” Sánchez replies, “always worrying about the next step, and proper sequencing. I have no idea what comes next, and don’t want to think about that because I’d rather focus on what’s before me now.”

Ever centrada, as they’d say back in Zacatecas.

**Photo of Sánchez sisters in Zacatecas provided by Christina Sánchez.