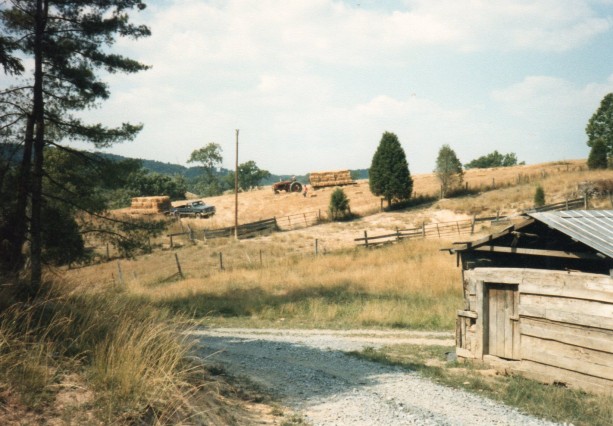 Sometimes the places I go are the places I came from. Imprinted from infancy with a sense of belonging, I cannot help but return to the small community of Meadowview, Virginia. Tucked away in the hazy Blue Ridge Mountains, Meadowview hugs the old Virginia Carolina railroad line which once hauled lumber cut from the high virgin forests of southwest Virginia. A river unfurls like a skein of silver along its hems, and some of the highest peaks in the state surround forests and farmland. The area is a green gem where beauty is a daily blessing. The town has never been my home, technically. Rather, it was the place I went each summer to catch lightning bugs on the front lawn with dozens of cousins, watch fireworks in the cow pasture, play with kittens in the barn, and watch in wonder as my cousin gathered eggs from underneath fat red hens, my first clue they didn’t originate in Styrofoam containers in the dairy case. Fuchsia bloomed wildly and miraculously in a basket on the back porch, rather than scorching in the midday heat like it did at home.

The graveyard at the small, white Presbyterian church near Meadowview holds many of my ancestors. Struck down early by tuberculosis and influenza, some died young. Others lived long lives, tilling the mountain soil they settled because it reminded them of their Irish home. I never even knew most of these people whose name I share. Yet the crumbling, lichen-covered tombs hold a piece of my heart, a parcel of my past. I look at them and know where I came from.

I returned recently after too many years of absence to attend a family reunion. There were people I wanted to see before the graveyard claimed them as well. I went for my father, who died several years ago, and to whom I owe this sweet connection. I struggled to remember names, to recognize faces that time had altered significantly. Someone spoke fondly of my mother, making me cry even though my mother has been dead ten years. I sputtered an apology for my tears and received a hug in return. Later, my gut responded with a twinge when my cousin, who’d recently moved from his house to a hilltop cabin nearby, turned to me and said, “I love these mountains. I can’t imagine living anywhere else.” A simple and unexpected declaration of love from a man of few words. A gift that will wrap me in its gentle truth for days.

Changes have come to the rural area where a scenic rails-to-trail project lures tourists on bicycles and Harleys. But peace still dwells among the hills and hollows, in the blue-green mountains that incubate a different sort of life from mine. I know the same problems exist there as in my suburban Atlanta community. No one is immune from the insidious busyness that forms the warp and woof of our days. But the pace is slower in these mountains, more tuned to the seasons-the season for making apple butter, planting crops, mowing hay-the seasons I forget as I spend my days in a windowless office.

The feel of this place pulses through my blood, and the tie that binds me to it is a silken spider thread tensile enough to bridge years of absence. The thread stretches thin as I travel the world. London. Dubai, Shanghai, Buenos Aires. I am often far away from this place where the crisp air blowing off the mountains hints at redemption. I hear of weddings and funerals for cousins I barely know, and inside I rejoice and grieve, separated by miles, connected by blood and the instinctual and primeval urge to return again and again to the place and the people from which I came.

Laura Templeton is a business professional in Atlanta, Georgia, and is pursuing a career as a writer and novelist. Her love of nature is apparent in her work, and she enjoys capturing the essence of a particular place in words.