It’s a funny thing, celebrating Thanksgiving outside of the United States. Just try explaining the whole deal about the Pilgrims and the Indians to the uninitiated. They might end up thinking you’re crazy–or worse, sadistic. And without the fall season, it just feels wrong to feast upon turkey, squash, and pumpkin pie. They’re heavy dishes that suit the cold weather, and they’re best served on groaning tables while the wind’s whipping through the naked trees outside. These are all things I’ve had reason to think about, having spent several of my childhood Thanksgivings in west and east Africa. With a father who works in international development, and a mother who works for the state department, I’ve learned to be flexible about where and how I spend my holidays. Everyone in my family has.

A couple of years before I graduated from high school in Nairobi, Kenya, my parents, my sister, and I had no plans for Thanksgiving, even though November was fast approaching. Unless we wanted to spend a sad sack holiday with just our nuclear family, we needed to find ourselves a plan, and soon. So we ended up joining a ragtag band of expats (most of them mere acquaintances) who were renting the former Mount Kenya retreat of a Saudi billionaire. It was an unlikely setting with an unlikely cast of characters, but bizarre adventures were all part of the fun of living in Kenya.

Traveling with us were an elderly couple–let’s call them Phyllis and Flynn–and a work friend of my dad’s and his wife–they’ll be Charles and Rita. Phyllis was a teacher at the international school where I was matriculating, and she spent the majority of the long drive talking about how little she liked children after her many years of teaching them. I didn’t blame her. My sister Jennifer, who was wedged in next to me, should have listened. She would go on to spend four years as a teacher, hating every loving minute of it. Charles and Rita, who were in the car ahead of us, kicking up a smothering cloud of dust, were the parents of a classmate of mine whom I knew only by reputation, mainly because he’d been caught bringing a batch of pot brownies into school. In a high school of 200 students, this was big gossip.

Honestly speaking, these were not my kind of people. I didn’t expect to have an especially invigorating time. Or feel much like giving thanks. I suspected that the adults would all get a bit drunk together, and Jennifer and I would retreat to our room to read companionably. 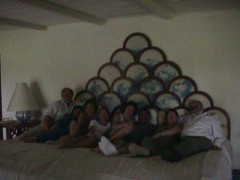 By the time our long drive was through–several hours over bumpy, mostly unpaved roads in two ginormous SUVs, driven convoy-style–I was pretty exhausted. But not so exhausted that I didn’t immediately realize that we were somewhere special. The ranch house was huge and utterly opulent, with Mount Kenya rising regally above it. Outside of the house, antelopes and warthogs gallivanted around, pausing as if for photo opportunities. A red-roofed relic of colonialism, Ol Pejeta house had once belonged to infamous Saudi arms dealer and billionaire Adnan Khashoggi, who had used it to throw lavish, weeklong parties. His old bedroom was equipped with a ridiculous double king-sized bed that was so large it could easily fit eight people. I know this because we tested it to see if we would all fit, while trying very hard not to think about what it had once been used for. For one weekend, this place was, unfeasibly, ours, and for a fee that would have gotten us little more than a suite in a Holiday Inn in Manhattan.

At first it felt unbelievably awkward to be spending Thanksgiving with Phyllis, Flynn, Charles, and Rita, who–let’s be honest–we never would have spent the holiday with under other circumstances. But the house–and its strange and compelling history–broke the tension. Jokes about Khashoggi, and where he might have hidden a stash of jewels or dope, made all of us laugh ourselves dizzy. And it was impossible not to revel in the beauty and comfort, impossible not to feel grateful for being here, now. This was part of what made living abroad so special–the bizarre things we could see, the history we could learn, the new people we could meet.

Suddenly, these (mostly) strangers were friends. Suddenly, we were here to celebrate together. Though we sat around a chicken rather than a turkey, we had held the holiday sacred by coming together as friends–a family of misfits–and by being grateful for all of the unique experiences that living in this strange land had brought to us. We were missing out on the comforts of home, true, but we were also forming memories that would stay with us for the rest of our lives. For me, this would be one of them–and not just because staying in the Ol Pejeta House made me realize all that I was missing out on by not being a billionaire. The experience also reminded me of what happens when you judge people. I had immediately labeled our fellow travelers as fuddy duddies, and as it turned out, they were far from it. All of us share this human experience, in all its strangeness and beauty, and there’s no better time of the year than Thanksgiving to remember that, and be grateful.

My family has been back in the United States for years; our conundrums are now more standard (how many pies are too many; how many bottles of wine are too few). We’re going to go a little more traditional for Thanksgiving this week–just a small gathering of family around a roast turkey. The weather will be just right, and I’ll be spared awkward conversations with strangers. But we won’t get to lie on a giant bed or search for hidden jewels–and alas, I’m a vegetarian now.

Angela Polidoro is an editor at Ballantine Bantam Dell and lives in Brooklyn, New York.