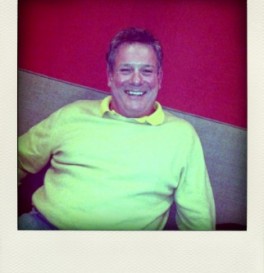 Randy Fertel, 61 and sweater-clad, looks professorial, which shouldn’t be surprising: he’s a former academic who taught English at colleges and universities on the east coast and in his native New Orleans. But what he doesn’t look like is the product of a dysfunctional childhood, or a guy with an axe to grind, or a person who spills his guts to strangers. His recently published book, The Gorilla Man and the Empress of Steak: A New Orleans Family Memoir, is both soul-baring and grievance-airing. The title characters (and make no mistake, they are characters) are his parents, Rodney Fertel-heir to a pawnshop fortune who earned his name by running for mayor on the promise of buying New Orleans a gorilla if he won (he lost, but still bought two gorillas)-and Ruth Fertel, a horse trainer turned lab tech turned restaurateur who transformed a tiny steakhouse into the Ruth’s Chris empire. Which I guess makes Randy Fertel the prince of steak.

Despite, or rather because of these quirks, Fertel thinks readers will be able to relate to his story. It’s one of an indifferent, aloof mother and an erratic, sometimes spiteful father. They’re “a high-profile nutty family that’s a little extreme,” he explains to me, as we talk about the audience he envisions for the book and the people who have come out to readings so far on his book tour. It’s a rainy evening in L.A., and he arrived that afternoon from San Francisco, where Alice Waters-whose Edible Schoolyard program Fertel brought to New Orleans post-Katrina-gave him a book dinner. “Imagine,” he tells me, with a little bit of pride and a lot of disbelief, “you go to Chez Panisse Café upstairs, and the menu has the title of your book on it-a menu for Randy Fertel!”

The ¡Lotería! Grill (my choice) in Studio City (where Fertel is staying with a friend) isn’t quite Chez Panisse, but I comfort myself with the thought that Mexican food is local in its own way, and I think he’s enjoying his margarita on the rocks and the guacamole he ordered for us to share. (I know I’m enjoying my margarita.) Plus, with three locations in L.A., ¡Lotería! follows in Fertel’s mother’s footsteps in a way: Ruth’s Chris, Fertel tells me, was probably the first upscale franchise restaurant in the country. It started off as a 17-table restaurant-“a down-home place, the kind of joint you went to after you won at the track”-that expanded because it was so popular the staff was turning people away every night. The first franchise was born after a customer who lived in Baton Rouge warned Ruth that if he kept having to drive back home drunk, “he was going to kill himself on the road, and it would be on her immortal soul, so she had to let him franchise.”

Maybe this is why we’re both nursing our drinks, or maybe it’s because Fertel’s tired: his book was a decade in the making, and he’s promoting it in any way he can, on his own dime. He tells me it’s his shot at “getting my stuff out there.”

I’m curious about this, since he doesn’t seem like an exhibitionist, and the cynic (and, I admit, New York publishing refugee) in me feels like there’s a glut of memoirs out there. Why add one to the fray, why think that anyone would want to read it-and why expose your family like that? Fertel admits that there was ego involved, and he really wanted a New York publisher, though the book ended up at the University Press of Mississippi. He says he wasn’t worried about his family. His parents are long dead, and he hasn’t heard from his brother, with whom his relationship, as the book makes clear (and as he does in person), has always been strained.

“I was kind of leery as to how people would react to my pulling my mother down from her pedestal, because she’s iconic,” he admits. “But in general people just kind of pat me on the back and say, ‘I’m glad you survived.’”

I ask if he thinks his mother would have liked the book, and he stares over my shoulder for a beat before answering. He doesn’t think so, he tells me, and his mother-who comes off as an admirable entrepreneur but a mercurial parent-is still a mystery to him.

“Mom was a woman of action, with a totally concrete operational type of mind,” he says. She “couldn’t deal with metaphor.”

Earlier in our conversation Fertel calls his parents “confusing,” but as the evening goes on he comes down increasingly hard on them. His mother was “absent” and his father “nuts,” he says, adding that he thinks his book is a perfect Christmas gift. Why? “Because everyone you give it to will feel they had better parents than they realized.” And, he adds, laughing, doesn’t everyone have a dysfunctional family to some degree?

The writing and now the tour have been therapeutic for Fertel. They are also the product of years of therapy. Writing down his “wacky family stories” was originally a diversion from an academic project, but it ultimately dovetailed with his professional interests. Fertel studied and taught the literature of war (we bond over The Things They Carried and the richness of World War I trench poems), which is to say the literature of trauma. He considers his book to be within the same genre, although he is careful to aver that his “trauma was minor.” Certain traits are common to the trauma narrative: a loss of control (his parents’ contentious divorce when he was a child), the feeling of the rug being pulled out from under you (his hunger for love and parental figures), and your life narrative no longer making sense (something he grapples with throughout his memoir). Recovery, too, has the same structure, he tells me: it’s about “gaining control, and getting a foundation under your feet again by telling your story to people who will really listen, and who won’t be harmed by your narrative.”

Although his troubled family is a product of New Orleans-his father lived in true southern Gothic squalor; his mother was a tough southern broad who got rich off the city’s butter-and-salt-laden cooking-Fertel’s deep love for his hometown is one of the things I enjoyed most about the book. It’s got a little bit of jazz history and a lot of the chaotic energy and quirkiness that struck me when I visited.

College and graduate school allowed Fertel to escape to the east coast, but he was eventually lured back home to work for his mother. The city itself had great allure, too, but it took research rather than experience for him to understand why. He delved heavily into New Orleans history and culture while writing the book. “It’s not just a feeling, it’s an understanding,” he tells me. “We really are unique.”

I tell him a little bit about my time in his hometown before it’s time to go, and he tells me I should have skipped going to Bourbon Street. (It’s a tourist trap.) He’s meeting his two sons, who live in L.A., for dinner, and his margarita’s not quite finished. (We’ve made a good dent in the guacamole.) Tomorrow night he’s heading to Arroyo Chophouse for a dinner to promote his book. I don’t ask him if Ruth’s Chris was already booked.