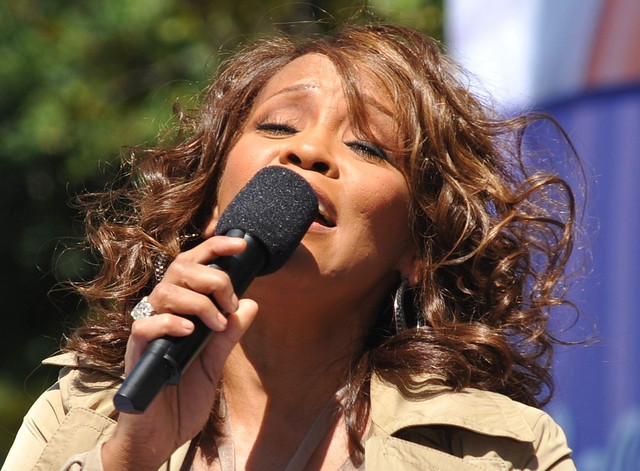 One day, about 25 years ago, I was listening to the radio station KGFJ when I heard a crystal-clear, powerful voice. The music that followed, about finding the greatest love of all, was the most touching song I’d ever heard. It started like this:

I was a teenager growing up in the projects of Watts, and every word of the song seemed to be ministering to me. I felt the love of God through it. The singer was someone by the name of Whitney Houston. Who was she?

I saved every dime I had to buy a tape by this singer. Then my cousin and I stayed cooped up in a room listening to the tape all the time. I began to learn Whitney Houston’s other songs, and, before long, every day it was me and Whitney. I even managed to save up for a Walkman, just to make sure I could listen to a Whitney tape anytime I wanted.

I lived with my great-grandmother–I called her Grandmomma–and I hated it. I don’t think Grandmomma loved me much, and she would fuss at me about Whitney. She’d say, “All you do is sit up in that room and listen to ‘Do he love me, do he love me?’” Many people didn’t understand. They told me a black girl like me shouldn’t go crazy over Whitney. Only white people did that. But I knew this was a deep soul urge. I wasn’t deranged. I was never confused about who my God was. I just admired Whitney the person.

In those years, in Watts, a lot of people I knew were selling their bodies, taking hard drugs, robbing, stealing, etc. But I was writing to Whitney’s fan club. I wrote all kinds of letters, hoping and praying that she’d stumble across them. In one letter, I told her how my mother was on drugs and had left me alone, how I didn’t think my great-grandmother loved me. I set the letter on top of my dresser until I could get a stamp. When I returned later, Grandmomma had read my letter. “What you think Whitney Houston want to meet you for?” she asked. “You a po’ black girl, come from the projects, ain’t got money. Whitney Houston don’t wanna meet somebody like you.”

As I got older, I sometimes thought I should put this silly, childish Whitney infatuation aside. And I tried. But I wanted so badly to have Whitney in my life somehow, some way. Even in small ways, I felt connected to her. August 7th is my birthday, and August 9th is Whitney’s. We were both Leos.

Just before I graduated from Jordan High School, I was talking to a classmate named Sanola, who shared a fact about Whitney Houston. “My godmother’s brother, Rickey Minor, plays music for her,” Sanola told me. “He’s her music director.” As soon as I heard this, everything seemed to be happening in slow motion. I became real close to Sanola.

One thing led to another: Sanola contacted her godmother about Rickey, and Sanola’s godmother gave me the number for Rickey Minor’s mother. So I wound up calling Rickey Minor’s mother, who was known as Bert. I told Bert who I was and why I was calling, and Bert was very friendly and caring in response, telling me I could call her whenever I wanted to. But she also explained that she hadn’t spoken to her son, Rickey, for months.

After that, I started calling Bert from time to time. We eventually met, and she and I became really tight. I called her whenever I was in distress, or just worrying about something, and she was always a listening ear. One day, Bert asked me if I wanted her to be my godmother. I replied, “Yes!” I moved in with her, too.

While living with Bert, I saved up some money to see a Whitney Houston concert. I didn’t care if Bert hadn’t talked to Rickey in a while. I was going to this show-and I was taking Bert with me. I asked Bert if she would drive us to the show if I got us tickets, and she said yes. So, on August 22, 1993, we went to see Whitney Houston at the Hollywood Bowl. After the concert, I wriggled my way toward the stage, pulling Bert behind me, saying I was going to find Rickey to tell him that she was there. Bert seemed a bit nervous about this.

Now, normally, I do have enough sense to mind my own business. But finding Rickey that day and having him see his mother was my way to Whitney. This was my business! On the stage I saw Whitney’s musicians, all of whom I knew by name, just from seeing them on album credits. I called out to Ray Fuller, the guitarist, and explained that Rickey’s mom was with me. “Rickey’s mother?” he said, looking surprised. He left to pass on the message.

Rickey came out with a big happy face. Bert looked at him. Rickey looked at her. They hugged. I was ecstatic. And proud to have helped a mother and her son reconnect. They chatted for a minute, Rickey whispered something to Bert, and Bert grabbed my hand tight. Rickey pulled Bert along, and Bert pulled me along. That’s when I realized that we were going to meet Whitney Houston.

We walked down a long hallway, and I saw Whitney at the end of it. Bobby Brown was there, too. I got shaky and nervous, because the time had come. Bert whispered to me, “Don’t you even think about letting loose. They will throw us out of here.” She was right to whisper that. I wanted to scream so loud. But I kept my composure.

Soon, it was my turn to talk to Whitney Houston. There I was, standing in front of her. I grabbed her hands and said, “Thank you, Jesus!” My prayers had been answered. 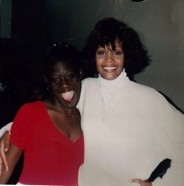 I started trembling and shaking. “Oh, look at her, she’s just trembling,” Whitney said, and then she gave me a hug. I was speechless. I pulled out my fan club card to let her know I was a true fan. She signed it. Then she gave me tickets for a show the following week at the Cerritos Center for the Performing Arts.

We went to the next week’s show and got to meet Whitney backstage again. This time, I asked Whitney if she would be in a picture with me, because, I explained, “Last week nobody believed that I met you.”

Later, after years of having admired Whitney Houston, I discovered she was having problems with cocaine. My girl Whitney Houston had fallen prey to the same addiction as my family. Was I surprised? Yes. I can’t deny it. It hurt. The devil was trying to make a fool of love. But I knew in my soul I had to be an unconditional fan. I wanted to support her, to pick her up when she was down. The way I’d felt about my mother, struggling with her demons and pain, I now felt about Whitney. I hoped and prayed that she’d be delivered. If anyone asked me about what I thought about Whitney doing this or Whitney doing that, I would just say, “I think Whitney is the bomb!” That’s what I say, still.

I had my first baby girl on January 23, 2002. I’d picked out the name long ago, of course. Whitney was the prettiest golden brown baby. She had a clean, smooth, soft little patch of hair. She was all that I had dreamed of: my own daughter in my hands. I was 29, the same age as Whitney Houston when she had her first daughter.