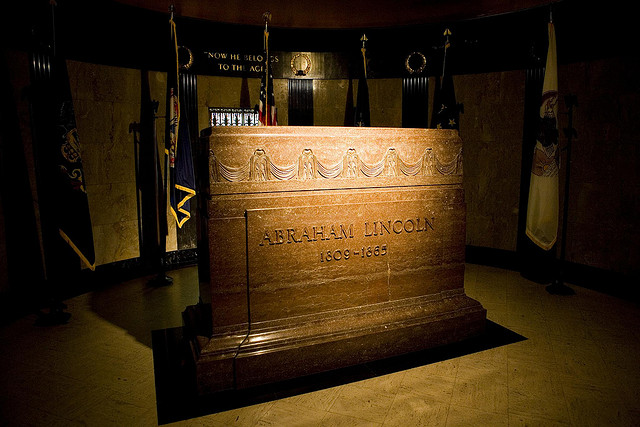 Election night 1876 arrived full of uncertainty. The presidential race was something of a referendum on Reconstruction, and the results were so tight that the winner was unknown. It would be months before a special commission awarded 20 disputed electoral votes, and the presidency, to Rutherford B. Hayes.

With all the attention on the election, it was the perfect night to pull off a crime. In the town of Springfield, Illinois, several thieves went to work on stealing a body from the local cemetery.

And not just any body.

It was the body of Abraham Lincoln.

The robbers might have gotten away with it. But among their number was an undercover agent who was relaying their activities to the Secret Service.

The Secret Service had not been assigned to protect the body of the dead president. Nor for that matter was the Secret Service in the business of protecting the bodies of live presidents. The agency would not assume that role until after the assassination of President William McKinley in 1901.

But, then as now, the Secret Service was attached to the Department of the Treasury and was in charge of foiling counterfeiters. The grave robbers’ plan was to trade Lincoln’s remains for the release of an imprisoned, notorious counterfeiter–Ben Boyd–and $200,000 in (non-counterfeit) cash.

The Secret Service prevented this particular grave robbery, but we’ve been trying to steal the 16th president ever since.

One of the most hated presidents while in office, Lincoln has become the most beloved, and sought-after, president in our history. President Obama, who announced his presidential campaign from Springfield in 2007, often tries to seize Lincoln’s mantle.

Hollywood is among the most persistent grave robbers. Steven Spielberg is directing a new film, Lincoln, based on Doris Kearns Goodwin’s bestselling book Team of Rivals. Just last year, Robert Redford directed The Conspirator, an account of the trial of those accused of plotting to kill Lincoln, with a particular emphasis on the lone female, Mary Surratt. And in a campier spirit, there’s the forthcoming Abraham Lincoln, Vampire Hunter, based on historical fiction by Seth Grahame-Smith. It posits that the president worked nights as well as days to protect the Union, and his enemies didn’t all report to Jefferson Davis.

I don’t blame these filmmakers, because I know from how tempting it can be to dip into the Lincoln vault–literally. In my own mystery novel published last year, Lincoln’s Hand, the catalyst of the story is that 1876 grave robbery.

After that failed attempt in 1876, Lincoln’s body was frequently moved to protect against more grave robbing efforts. The coffin was even opened twice to see if the body was still there. It was–and still is.

But you don’t need a shovel to grab a piece of Lincoln. An estimated 16,000 volumes have been written about Lincoln, far and away more than any other American. According to one survey, of the 600 public statues or sculptures of American presidents, more than one-third of them depict Lincoln.

What explains the endless exploitation of Lincoln? The easy answer is that Lincoln is being honored for helping guide the country through its greatest crisis.

But that’s only part of the story. Also central to our attraction is Lincoln’s demise

“It was the manner of his death that elevated him above all others in the American Valhalla,” argued historian James M. McPherson in the New York Times. “Coming five days after General Robert E. Lee surrendered at Appomattox, John Wilkes Booth’s shot heard round the world changed triumph into a tragedy of Shakespearean proportions.”

This tragedy–death at the moment of triumph–is intensely cinematic, and the story is enhanced by Lincoln’s complex character. Lincoln exemplifies “the right to rise” through hard work and learning, no matter how humble one’s beginning. He is the embodiment of the American dream.

Lincoln also left future authors and screenwriters plenty of material in his own writing. When modern life confuses us, Lincoln’s message remains relevant. To a country obsessed with reinvention, he offers the hope of “a new birth of freedom.” His dictates of “malice toward none, charity for all” still remain the markers for any American who wants to be revered. His explanation of political gravity–“you can’t fool all of the people all of the time”–remains sage advice 150 years later. And what better phrase has anyone designed to describe the internal American struggle against darkness–and for a brighter future–than his counsel to reach for the “better angels of our nature?”

No wonder, then, that everyone wants to dig up Lincoln, whether the goal is to refresh the American spirit, remind us of the American character, or get a book ranked high on Amazon. Bringing Lincoln back to life reminds us what our country strives to be. That comes through whether it’s Lincoln in a straightforward biography or Lincoln in a fistfight with vampires.

Joel Fox, author of the mystery Lincoln’s Hand, is editor of Fox & Hounds Daily and president of the Small Business Action Committee.