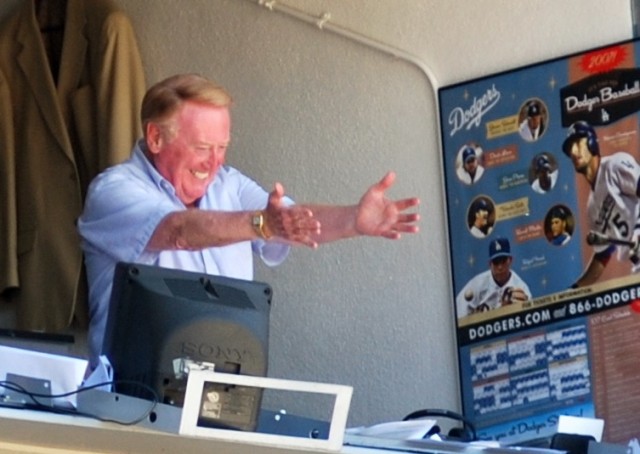 To: The People of Los Angeles
From: The Future
Re: Urgent Need to Deal with Vin Scully Succession

I, The Future, do not typically communicate via memo. But as a Los Angeles native (yes, The Future was born here), I must intervene in the past when my hometown faces a mortal threat.

The mortality of Vin Scully, the Hall of Fame announcer for the Los Angeles Dodgers, is such a threat. Scully binds together Los Angeles like no other living person. He is, as the Los Angeles Times declared in 2008, “this city’s last civic treasure.”

But I must warn you that Mr. Scully will not occupy the microphone forever. He is 84. He just announced that he won’t go on road trips east of Phoenix. He has said he may retire. And life is short, as Scully is fond of noting. (Remember when Vin, after reporting that an injured player was “listed as day to day,” paused for a beat and added, “Aren’t we all?”)

Alas, you, the people of L.A. of 2012, are behaving as though Scully will be the soundtrack of Southern California summers forever. You have failed to come up with a plan to replace him. If you don’t, you will regret it.

Now is the time. The Dodgers are for sale, and the most important thing about the new owners (despite all the misdirected questions from Angelenos about ticket prices, Magic Johnson, free agents, and the McCourts) is what they will do when Vin must be replaced.

Here’s the bad news: based on the current space-time trajectory, things do not go well. The new owners look around the country and hire someone who, while competent, disappoints Dodger fans. The person has no special connection to the people of Los Angeles, and the city loses the last voice that ties its denizens together.

Now for the good news: this does not have to be. If you come together soon, you can demand that prospective Dodgers owners commit to a Scully replacement process.

What would such a process look like? Here in the Future, I recently convened a Zócalo panel discussion at the Floating Theater (it sits, suspended in the air, 5,000 feet above Koreatown–your grandchildren will love everything about it except the glass-bottomed bathrooms). We came up with five options for succession planning:

1. The Warren Buffett Option
In your time, the man who sees the future most clearly (despite the odd stumble) is a billionaire Oracle from Omaha. He chose his successor at Berkshire Hathaway all by himself while making a point of not identifying the replacement until the moment of transition. Scully could be asked to do the same. A successor picked this way would have public legitimacy and an eternal connection to the beloved Vin.

2. The College of Cardinals Plan
When Catholics pick a pope, they put the leaders of the church in the Sistine Chapel. Why not apply this approach to picking a successor for Scully, who is, after all, a devout Catholic? Assemble all of America’s–heck, make it the world’s–leading broadcasters in the Stadium Club. Lock them inside, with nothing but Farmer John Dodger Dogs for sustenance, until they figure out who would make the best Vin replacement. They could even signal that they’ve made a decision by burning Frank McCourt’s deed to the team and letting the smoke waft up over Chavez Ravine. A successor chosen this way would be a true professional with an established reputation for excellence.

3. Digital Vin
Don’t replace Vin at all. Eternal life is not yet possible, but technology offers an alternative. Contract with one of California’s artificial intelligence companies to create a Vin machine that could announce games. It would be programmed to speak exactly as Vin did in 1988, the year of the Dodgers’ last World Series championship.

The top nine candidates would be brought to Dodger Stadium to announce one inning each. Fans could vote over the Internet for their favorites. The final three would each broadcast a road game east of Phoenix, and the winner would be chosen with another online vote.

5. The Tommy Lasorda Plan
Give the job to Tommy Lasorda. He’s not a broadcaster. But people love him. And when you think about the way Tommy eats, the fact that he’s not yet dead suggests that he’ll live forever.

Joe Mathews, who owns 1/12 of a Dodgers season ticket, is Zócalo’s California editor.