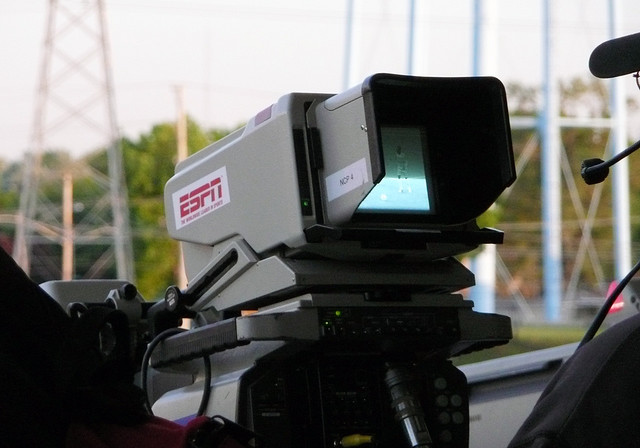 For years I’ve heard the joke that soccer has been America’s sport of the future since 1972. But unlike Dippin’ Dots, which remains the ice cream of the future, soccer in America has arrived, and American soccer fans are reaping the benefits. We have a growing and improving domestic league, and there is more international soccer on accessible TV networks than a person could ever hope to watch each weekend.

Only a little more than a decade and a half ago, if you wanted to watch one game a week you had to own a satellite dish, buy a pay-per-view package, or watch a semi-scrambled Telemundo broadcast. Now there are three networks on basic cable (ESPN/ESPN2, NBC Sports, and Fox Sports) that broadcast the English Premier League, La Liga, and MLS games almost every week. Two expanded basic cable channels (Fox Soccer and GolTV) air multiple games each week from all the top European Leagues in English. Last season, the main Fox broadcast network even paired some English Premier League games with NFL games.

It wasn’t always this way. In 1994, when the World Cup came to the U.S., I was 10 and too stupid to know that it was an event that I really should have wanted to attend. Like many children of the ’80s, I had grown up playing soccer, but I had never watched a televised game. The 1994 World Cup was my first real exposure to the international game. Since then, the ESPN networks have done an excellent job of showing both men’s and women’s World Cup games. But in years past, after the excitement of the World Cup, soccer would mostly disappear from the airwaves. After all, soccer was an oft-maligned niche sport followed mainly by those who preferred the metric system. Based on the attitudes of my non-soccer-playing friends, it felt like it would stay that way.

By 1996, the inaugural year of the MLS, I had become immersed in soccer. My coach at the time was a German who encouraged the team to watch more games to see how the sport was supposed to be played. Apparently, as I learned later, the stout defensive organization and sharp one-touch passing of a team like Bayern Munich was far superior to the style played by the Portland Pride, our now-long-defunct professional indoor team. Watching games, however, was more difficult than you might think. My family did not have cable. That meant I got to watch fewer than 10 televised soccer games per year in a non-World Cup year: a couple of U.S. Men’s National Team qualifiers or friendlies, a stray MLS Game or two, the MLS All-Star game, and the MLS Cup final. I got excited for these big games, but what was I supposed to do in the weeks and months in between?

In order to fulfill my growing desire for soccer, I had to find other outlets. Sometimes this meant sleeping over at a friend’s house because his parents had a dish; other times it meant going to my local soccer store, The Far Post, and taking out a taped pay-per-view broadcast. I remember vividly knowing the details of Manchester United’s dramatic last-minute comeback victory over Bayern Munich in the 1999 Champions League Final but having to wait a couple of weeks before I could actually watch the tape.

Looking back, renting taped games seems only marginally less absurd than waiting for my copy of Soccer America, which contained month-old standings and the slim possibility of an article or two about the foreign leagues, to arrive in the mail. And I know I sound like an old man when I say that I looked forward to my visits to Barnes & Noble, where I had to figure out the pound-to-dollar conversion to determine whether I had enough money to buy a copy of Four Four Two or World Soccer, both of which had great articles but criminally outdated information. The Internet helped eliminate the need for these quaint relics, but the lack of reliable Internet video players prevented me from doing much online watching until well into college.

While the World Cup is the bigger tournament, traditional rivalries coupled with greater parity among competitors make the UEFA European Championship the more exciting tournament. Euro 2000 was only broadcast live on pay-per-view. With no other place to watch the games, my friend and I would drive about a half hour against traffic every morning out to the Nike campus, where his father worked. There, we watched the matches with a crowd comprised of employees from all over the world. It was exhilarating to watching these games with individuals who were so deeply invested in their national teams. Four year laters, Fox Sports World, which, at the time was not easy to get from the cable providers in my area, broadcast most of the Euro 2004 games live. Home from college and working at a department store, the tailors and I would show up to work early and hang out on the fitting room couches watching the games until we had to open up. Needless to say, that summer I was often in the back checking on whether alterations had been completed. These special, communal experiences shared with relative strangers enhanced my love of soccer and my appreciation for it not just as an athlete but as a spectator, too.

In the aftermath of strong ratings for the 2006 World Cup (remember the head butt heard ’round the world?), ESPN announced that it would broadcast all of Euro 2008 live in HD. On lunch breaks, my officemates and I would watch the games. Some even kept them on in the background while going over spreadsheets. Pigskin-loving, fantasy-football-playing guys who had never expressed an interest in soccer wanted to know my perspective on Portugal’s early exit and Germany’s chances against Spain. This, in my mind, was the real turning point. But the country’s growing interest in world-class soccer would become more apparent through the exuberance Americans showed for the 2010 World Cup. The viral YouTube videos showing American soccer fans’ reactions during the U.S.-Algeria game were not only spectacular because of the overwhelming joy shown by the crowd in response to Landon Donovan’s late game-winner, but also for the fact that there were that many people watching a soccer game in the middle of a summer day.

We’ve come such a long way. Soccer may not yet be on par culturally with the three major American sports (which I was rudely reminded of last summer when ESPN preempted the start of a U.S. v. Mexico game with coverage of an early round Little League World Series game), but soccer’s growing American fan base is pushing the sport onto center stage. The second-round match between the U.S. and Ghana in 2010, a mid-afternoon Saturday affair, was watched by 19.4 million viewers on ABC and Univision-roughly the same size audience Fox averaged over six prime-time games for the World Series the previous year.

This year’s big tournament, Euro 2012 is already off to a great start–and not just because the games have been entertaining and the ratings strong. ESPN’s broad platform has allowed me to watch the Euro 2012 games on my TV, laptop, and iPhone. Sunday’s Spain v. Italy opening round game outdrew the PGA tour event on Saturday and ESPN’s Sunday Night baseball. These numbers suggest that soccer has won the hearts of American fans, and that interest in this country has progressed past the point where it waxes and wanes with the World Cup. It’s become a constant and profitable part of America’s sports pantheon. And who knows? With American football mired in controversy, soccer could have an even bigger moment ahead.

Greg Lockwood is an attorney living in Minneapolis.