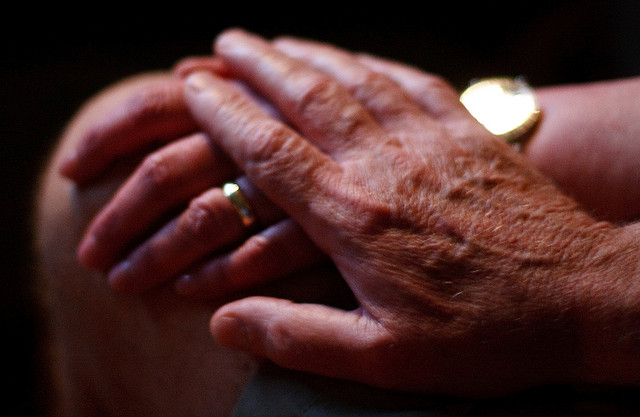 I am writing this piece as a middle-aged woman who recently lost her younger brother. We were “Catholic twins,” born 18 months apart in Kansas City. As kids, we fought. In high school, we played duets at weddings—my brother on violin, me on viola, the two of us strolling about the room. As teenagers, we made plans to leave home together.

I studied medicine at Howard University, and he got an MBA from General Motors Institute. My career moved me around the country. He settled in Detroit, then Oakland. Throughout it all, we stayed in touch. As technology evolved, so did our communications: telephone, mobile phone, email, Facebook. I knew that he was gay long before he admitted it to our parents. I came to know and appreciate his boyfriends, the last of whom he married.

My brother’s widow is a good man. He did not deserve to experience the events surrounding my brother’s last moments. They took place on July 25. My brother, age 56, was having breakfast. During the meal, he told his husband that he did not feel well and left the table to return to his bed. Thirty minutes later, my brother’s husband walked in to find my brother dead. Hysterical, the husband dialed 911. A series of professionals arrive on the scene—the ambulance workers (couldn’t save him), the police (couldn’t help him), and finally the coroner. After determining there was no evidence of foul play, the coroner left. My brother’s husband was now alone in the home with his dead partner. All the professionals had abandoned him.

I am also writing this piece as someone who has spent the past 25 years thinking about aging, particularly among minority populations. I live in the world of public health research and move in research circles. I hear many public-policy discussions that focus on advance care planning, with phrases like “making your wishes known” and “patient choice” and “do not resuscitate” dominating the conversation. What I don’t hear enough is the simple word “compassion.”

In my professional life, my colleagues and I have a thousand variables in our statistical models to explain deaths that happen too soon. Compassion is generally viewed as beside the point—a view that isn’t a problem in the world of statistics. But the cold language of public health research—with terms like “explanatory risk factors”—has also crept into our day-to-day discourse. Engage in high-risk behaviors—smoking, heavy drinking, eating junk food—and the numbers show you’ll die sooner. You should have known better.

The distress of sickness or bereavement is not diminished by a recitation of bad habits. Anyone living in the space of grief and loss needs the kindness of others. Neuroscientists have begun to assess the physiology of emotions by examining the brain in different states. In an MRI of the brain, a blue color indicates serenity. When someone is in deep meditation, whole regions of the brain turn a deep blue. Can we not conduct analogous research into the effects of compassion on a grieving brain?

In my professional life, my colleagues and I also see numbers relating to geography and end-of-life care. Live in certain parts of the country and you’re much more likely to die in a hospital than at home. Where you live affects how you die; but how does it affect compassion? Do resources missing from the community where my brother lived determine how my brother’s husband was treated? I think so. If you live in the wrong place, if you die under certain circumstances, then neither you nor those who mourn your death can expect too much sympathy. My brother’s house was in a poor and crime-plagued neighborhood in Oakland. There was no compassion.

Using research, I can confidently say that many Americans, black Americans especially, refuse to engage in end-of-life planning or discuss treatment limits. Some researchers link such refusal to some specific historical grievance, such as the Tuskegee syphilis study conducted between 1932 and 1972. But there’s not much evidence for the link. I see something simpler. In kitchen-table conversations with my female physician friends, we share stories about our experiences with patients at the end of life. Abandonment is a central theme: the experience of having had a professional make a fateful pronouncement and then walk away, without compassion. Maybe some of us request fruitless treatment and intrusion because it’s the closest we can get to human sympathy—because the alternative, being alone and uncared for, frightens us even more.

For better or worse, I have never had a family member die after a prolonged decline. There was never any fighting over whether a machine should be disconnected. There was no selection from a menu of treatment options. During a 30-year period, I’ve had 10 relatives die from a variety of causes. Some of the deaths were “natural,” while others were the result of violent crime. But in all cases, death came suddenly. No wonder that the idea of “advance care planning” has felt remote and the idea of abandonment has felt acute.

Compassion shouldn’t be confined to the patient, either. The loved ones we leave behind when we die, people like my brother’s husband, deserve a more compassionate system. I was moved when, a short time after my brother died, I got a call from his physician. She expressed her sympathy and her puzzlement. His death came as a surprise, she told me. She had seen him a few weeks before and found nothing remarkable. This didn’t give me answers, but it gave me a lot of comfort. After the nonviolent deaths of family members, I’d encountered indifference. After the violent deaths, I’d encountered silence. This physician cared, and I was grateful.

Fortunately, I am part of a large, noisy family. Like most American families, we live scattered across the country. But in times of bereavement, we gather. Most of us have private sources of comfort and support, and no healthcare system can ever supplant that. But neither should any healthcare system leave a grieving widow alone with the body of a spouse and no one to call for help.

Before my brother died, I happened to be studying the health effects of bereavement. I call it The Mortality Project. Other researchers and I are developing ways to measure the injury associated with loss. Time does not heal all wounds. We are finding evidence that, when an adult loses a parent, there is a 10 to 20 percent increased risk for illness during the next 10 years. Grief can cause body changes that are indistinguishable from diabetes. Seeing a loved one die in the ICU and hospital is strongly associated with prolonged grief and post-traumatic stress disorder. We know that parents whose children die before them live in a perpetual state of mourning. Loss is an understudied and under-recognized public health threat, and a cruel system makes it even worse.