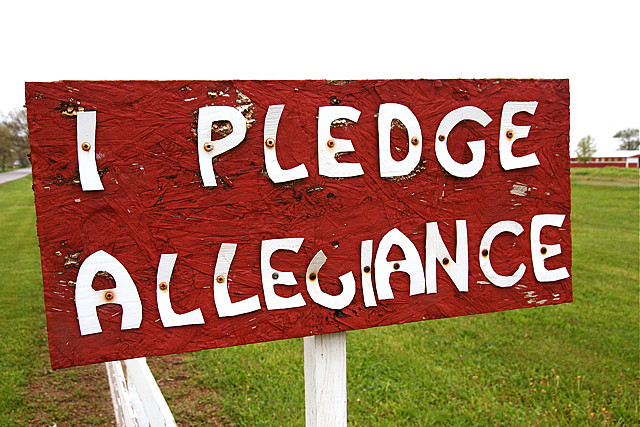 Stress the responsibilities of citizenship

Citizen Who, a one-man show written and performed by Eric Liu in a project for the Center For Social Cohesion, asks a lot of questions about what it means to be an American and what it means to be a citizen. Liu starts his performance by making the audience recite the oath taken by Americans during a citizenship ceremony. He closes his performance by asking the audience to join him in a new pledge of citizenship. In advance of Liu’s upcoming performance, we asked a number of Americans to reexamine a very familiar schoolhouse pledge: the Pledge of Allegiance. Suppose it has been cancelled or forgotten and we need a new one. How would it go? Those who like the old Pledge tended to pass on our invitation. Those with complaints about it gave us some answers, which follow.

Personally, I believe it to be just short of idiotic pledging to the flag, a scrap of cloth. In 1966, I raised my right hand and swore an oath to the Constitution of the United States of America, to support and defend it against all enemies, foreign and domestic. Now that’s a pledge worth making.

Lawrence Wilkerson is former chief of staff to Secretary of State Colin Powell.

The American ideal is choice, freedom, and unity through diversity, but forcing all children to pledge allegiance to a flag or country breaks that ideal and pressures every child to conform, salute, and fall in line. Are our children not free to dissent from authority? Are they not entitled, indeed, to dislike America and yet still be American citizens?

What about non-American children? Is it our job as American Citizens to force children of other nations to either pledge allegiance to our country, or to choose to sit out in front of all their friends, every day? This only nurtures division, as does the inclusion of the Christian god—and it’s all totally unnecessary.

We need no pledge of allegiance to our flag or our country. What we do need is a statement of unity that everyone could support, without exception, and without exclusion, for the purpose of making the citizenry understand what America stands for. This is a tall order, but here’s my suggestion:

The United States of America is a country based on freedom and democracy, where individuality and diversity are welcomed. I pledge to honor its traditions by respecting others as they respect me, even as we disagree, moving together to enrich our own lives and the lives of others. We recognize and appreciate the Constitution, which makes this freedom possible, creating one indivisible nation for a richly diverse population, providing liberty and justice for all. United, we stand.

In 1973, Sister Mary Stephens led our first recitation of it in class. I don’t recall being told where it came from, let alone what it meant, but I enjoyed mouthing aloud the words—as if I were reciting, for the very first time, a poem.

I was bilingual by then. But for some of my classmates, the words were shards—pieces of a second, unfamiliar tongue. Saint James was in San Francisco’s Mission District, where I was born and raised.

Fast forward to, oh, 1982 or so. The Women’s Building on 18th Street was hosting an evening of poetry and music to protest Reagan’s reckless wars in Central America.

The trim man at the mic wore a stylish leather jacket that matched his hair. He shared two pieces. One was titled “Prayer.” The other was only four lines long: he recited the Spanish original, and then his English translation of it.

That was Francisco X. Alarcón—an openly gay Chicano poet—and the first time I heard him perform his art, the ground shifted a bit for me, although I remained deeply in the closet.

The other day, commenting in The Miami Herald on the selection of Richard Blanco, “a gay Cuban man,” as the inaugural poet, writer Achy Obejas movingly articulated how we felt: “[B]ut every now and then something happens, and it reminds you that the journey is ongoing, that the shining city on the hill, that place of paradise where we’re all equal, is not quite here. But we’re a little closer.”

As for a new Pledge of Allegiance, until there really is “liberty and justice for all,” including my fellow GLBT citizens, I won’t be—even for fun—writing a new one.

Francisco Aragón is the author of two books, Puerta del Sol and Glow of Our Sweat, as well as the editor of The Wind Shifts: New Latino Poetry. He directs Letras Latinas, the literary program of the Institute for Latino Studies at the University of Notre Dame. His website is: http://franciscoaragon.net.

Stress the responsibilities of citizenship

I have a problem with children pledging unquestioned allegiance to the flag without really thinking about what the responsibilities of citizenship are (besides loyalty to the state). I’d like to encourage children to ask what it means to be American and to consider how they can be part of realizing the American promise, that is, the promise of “liberty and justice for all.” For me, it involves valuing the long-term public good over personal gain, recognizing dissent and activism as core parts of the American tradition, and working for environmental and social justice.

As for the reworded pledge, here is my suggestion:

Julia Mickenberg is Associate Professor of American Studies at the University of Texas at Austin. She is the author of Learning from the Left: Children's Literature, the Cold War, and Radical Politics in the United States (2006), and co-editor (with Philip Nel) of Tales for Little Rebels: A Collection of Radical Children's Literature (2008).