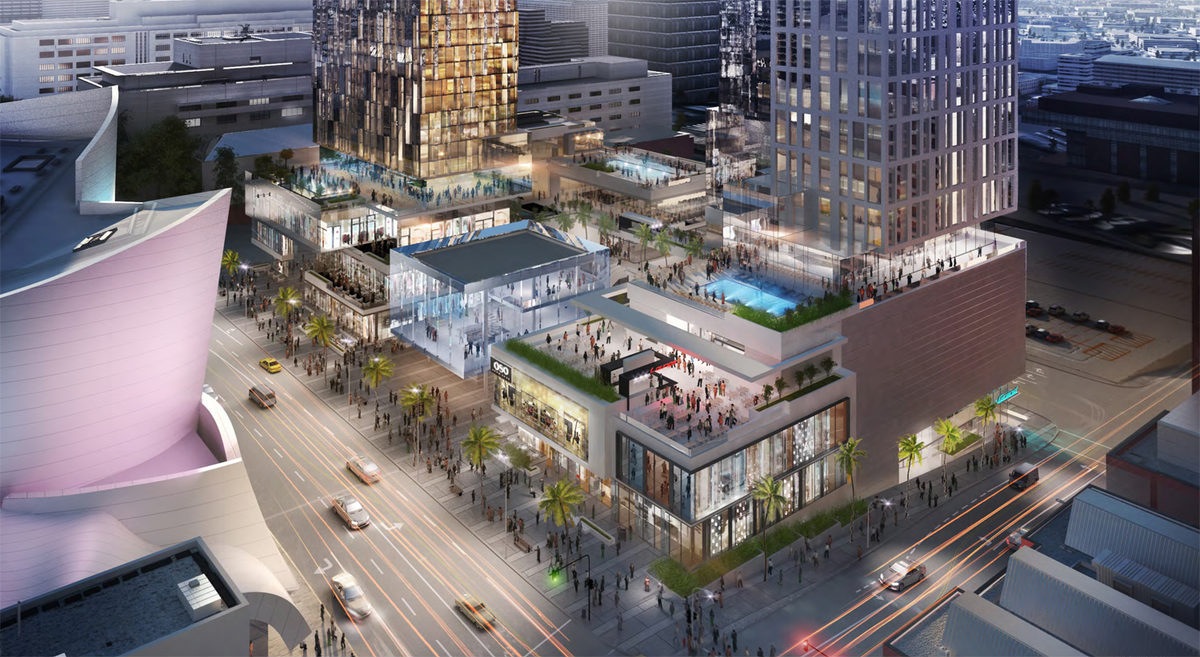 Get real about how people use public space

Be inviting and offer people more

If you’re an Angeleno, you’ve probably had occasion to park in a large and ugly lot across from Walt Disney Concert Hall. That spot is also known as Parcel Q of the Grand Avenue project, a massive mixed-use development that’s been planned for, fought about, and postponed for nearly a decade now. The hope is that the project will finally make Bunker Hill into a more dynamic part of town.

But so far there’s been little but delay, squabble, and more delay. Here’s a quick rundown of the key developments: In 2007, the developer of the project, Related Cos., put forward the first architectural vision for the project, drawn up by star architect Frank Gehry. Then the economy went into free-fall. The plan got shelved, the project got delayed, and the Gehry plans eventually got tossed. This year, Related put forward a new set of plans, drawn up by the architecture firm Gensler. But that didn’t fly, either. The Grand Avenue Authority, a three-person governing panel of county and city representatives, voted down the Gensler plan. Critics said it lacked enticing public space, failed to promote pedestrian and street activity, and perpetuated what L.A. County Supervisor Gloria Molina called “the fort-like conditions down Grand Avenue.” So now Related is going back to the drawing board—once again, with Frank Gehry.

So what should they do? We went to four people with experience in urban development and planning and asked: What would you advise for developing Grand Avenue and Parcel Q—which is supposed to combine hotels rooms, condos, apartments, restaurants, and retail space—to bring more life and public space to this area?

Get real about how people use public space

The image of Grand Avenue depicted in the proposed design put forward by the developer Related Cos.—one with residential and office towers and shorter four-story structures with multiple gathering spaces on terraces at different levels—will never be achieved. This plan seems to envision that downtown Los Angeles will be like an opera house at intermission, with scores of people milling around on different terraces. But nowhere in the world is there a successful outdoor development that works according to this principle. No structure of this sort would steadily draw the numbers of people shown in the rendering. Attractive architectural drawings have always been used as way of misleading authorities into believing a project will be far more attractive to ordinary citizens than it really is.

I think the Grand Avenue project ought to consist of three separate structures: two large buildings on either end (perhaps with towers set farther back from the sidewalk) and a shorter pavilion-like structure between the two. On either side of the pavilion would be a promenade running from the Grand Street sidewalk toward the back of the buildings and the parallel sidewalk to the east. These two promenades would invite people in from the sidewalk. Behind the pavilion would be the principal space: a large public square with a garden. The structures on each side of the pavilion would offer a mix of public uses—bookstores, cultural meeting places, restaurants, and nightclubs—that would give people a reason to be there at any time of day, morning through night.

The public square behind the pavilion would not be a strictly landscaped garden but a dynamic place in which freestanding plants could be moved about and configurations could be varied. Food kiosks and restaurants could line the public square, perhaps on two levels. I would activate the sidewalk with outdoor eateries and create canted corners—that is, corners that are cut away at an oblique angle, for greater openness and visibility—to help activate the side streets.

I think it was a major mistake to choose Frank Gehry as an architect of the original Grand Avenue design, which was unveiled in 2007, and to bring Gehry back for the next round of submissions. While Gehry buildings are impressive, they tend to deflect and reflect rather than attract people. That is the opposite of what Grand Avenue project needs in order to be successful.

Fred Kent is the founder and president of the nonprofit organization Project for Public Spaces.

The lack of public participation in the development of Bunker Hill, and the failure of its proponents to understand fundamental urban dynamics, have so far rendered the area something just shy of a colossal failure.

The Grand Avenue project, the latest effort to save the area, reeks of the heavy hand of government and has all the warmth and fuzziness of Nicolae Ceaușescu’s Palace of the Parliament.

The redevelopment of Bunker Hill in the 1950s was like a story out of Stalin’s Russia. All the planning was done behind closed doors, people were displaced, all history was erased, the hill was bulldozed and reconstructed, and the powerful built their cultural monuments at great social, economic, and environmental expense.

Yes, Bunker Hill’s towers are rented out, and cultural institutions abound, but at what expense to the city? And where are the people?

L.A.’s rich and powerful have thrown copious amounts of money at Grand Avenue in a vain effort to lure crowds and urban vibrancy to a hilltop. This is the urban planning equivalent of pushing water uphill, as there are few to any examples in the world of bustling commercial districts found atop hills. Residential districts maybe, but thriving mixed-use districts, no.

Dare I say it? Besides the Cal Plaza programs, the most exciting and spontaneous public spaces on Bunker Hill are the parking-structure elevators during a MOCA opening.

If the investors in Grand Avenue were the smart, savvy, urbane people they presume to be, they’d take cues and learn from the Fashion District, Olvera Street, Spring Street, Broadway, and Little Tokyo, all vibrant and thriving downtown districts, none having received nearly the amount of investment Grand Avenue has received. Why? Well, perhaps that is for them to explore, observe, and figure out on their own. We’ve held their hands long enough.

James Rojas is an urban planner/artist who travels the U.S., Mexico, and Canada engaging the public through play, imagination, and storytelling to create better communities. He spent three years in Eastern Europe after the fall of Communism building up civic society through environmental activism. For more, visit www.placeit.org.

Having developed mixed-use projects, I have learned that for any design to be successful, it must meet the realities of the marketplace. The prior design of Grand Avenue by Frank Gehry from 2007 had façade design elements that were very much like Disney Hall. While the Gehry design was exciting in concept, it was completed in a much more robust economy, which is one of the reasons the Related Cos. decided earlier this year to go with a different plan.

The Los Angeles Grand Avenue Authority has criticized the latest design as overly commercial. In fact, though, there is less commercial square footage and hotel rooms in this plan than in the Gehry plan. The current plan calls for the residential component of the new buildings to be developed as rental apartments rather than condominiums. The marketplace has dictated both moves.

As was the case with the prior design, the Related Cos., the developer of the project, has shown only conceptual renderings to the public. There is a lot of design work yet to be done.

One positive feature of the current design is that it is more generous with open space and is set back more from Grand Avenue. But other things require attention, too. Given the location, for example, restaurants and retail should be located on the ground floor. The spaces fronting Grand Avenue should feature a variety of restaurants, with outdoor dining. This would allow the second and third levels of proposed commercial to be replaced with residential units.

The Related Cos. has completed other projects that provide useful templates, like “The Village” in Santa Monica. The Village project fronts on Ocean Avenue features building elements that vary in size, materials, and colors. It also has glass balconies, interesting elevation changes, and setbacks that all tie together with a visually pleasing design that is also pedestrian-friendly. If Related were to incorporate such design details into its Grand Avenue plans, the project would receive a lot more support.

In the next four months, I am confident that a refined design will overcome the Grand Avenue Authority criticism of being uninspired.

Michael P. Russell is an L.A.-based real estate development consultant on projects including the Howard Hughes Center, Bunker Hill and Warner Center projects, and serves as an expert witness in real estate cases. Visit him at http://www.therussellcompany.us

Be inviting and offer people more

“Places are spaces that you can remember, that you can care about and make a part of your life.” —Donlyn Lyndon

The Related Group’s submission to the Grand Avenue Authority is a fine example of some of the leading elements of the modern architectural style—tall, rectangular structures of glass, steel, and concrete with a minimum of ornamental detail. It would be the right design for many downtown parcels, but it is not the best possible design for this distinctive location: the southeastern corner of First Street and Grand Avenue.

The design plans offer little to the many people who come to this location during the day and during the evening. The people who will live and work in this new complex, the worshipers at the Cathedral of our Lady of the Angels (located at Temple and Grand), the patrons of the theater and art museum, the employees of the government buildings and those in private industry—all should be connected to this central, unique space. There should be an interesting large gathering place that would be open to the public and offer spectacular views of the Grand Avenue Corridor and the night lights of the city. The project storyboards, instead, show a glass-walled mall through which the public must pass to enter the space. There are very few amenities outside the glass doors: little or no seating, fountains, public art or landscaping. Stairway entry portals exist on the north and east sides but nothing beyond that. For the most part, it is a project that turns its back to the street.

Some improvements can be achieved without compromising the project’s objectives of developing the block with a first-rate boutique hotel and residential and commercial buildings. The best practices in urban design for creating a stronger sense of place would call for a reduction in size of the front row of buildings along Grand Avenue to create space for a wide-mouth open piazza. Changing to more natural building materials such as stone or granite and less glass on the first two levels would provide more visual interest and warmth. Varying heights and views would be created by stepping some of the second- and third-level floors back from the building line. Opening the project on all sides through design features and perhaps adding retail along the side streets would enliven the project. I would add wide curving stairways as entry points with interval landings rather than the straight and narrow stairs and escalators presently proposed.

Adding the right mix of intriguing public art, landscaping, seating, and other features along with outdoor shops would go a long way to rewarding those that brave the walk to the top of the hill.

Gordon Hamilton is a career urban planner with extensive experience in municipal and multi-jurisdictional land use projects. He worked for 30 years in the City of Los Angeles Planning Department, including 13 years as the deputy director.