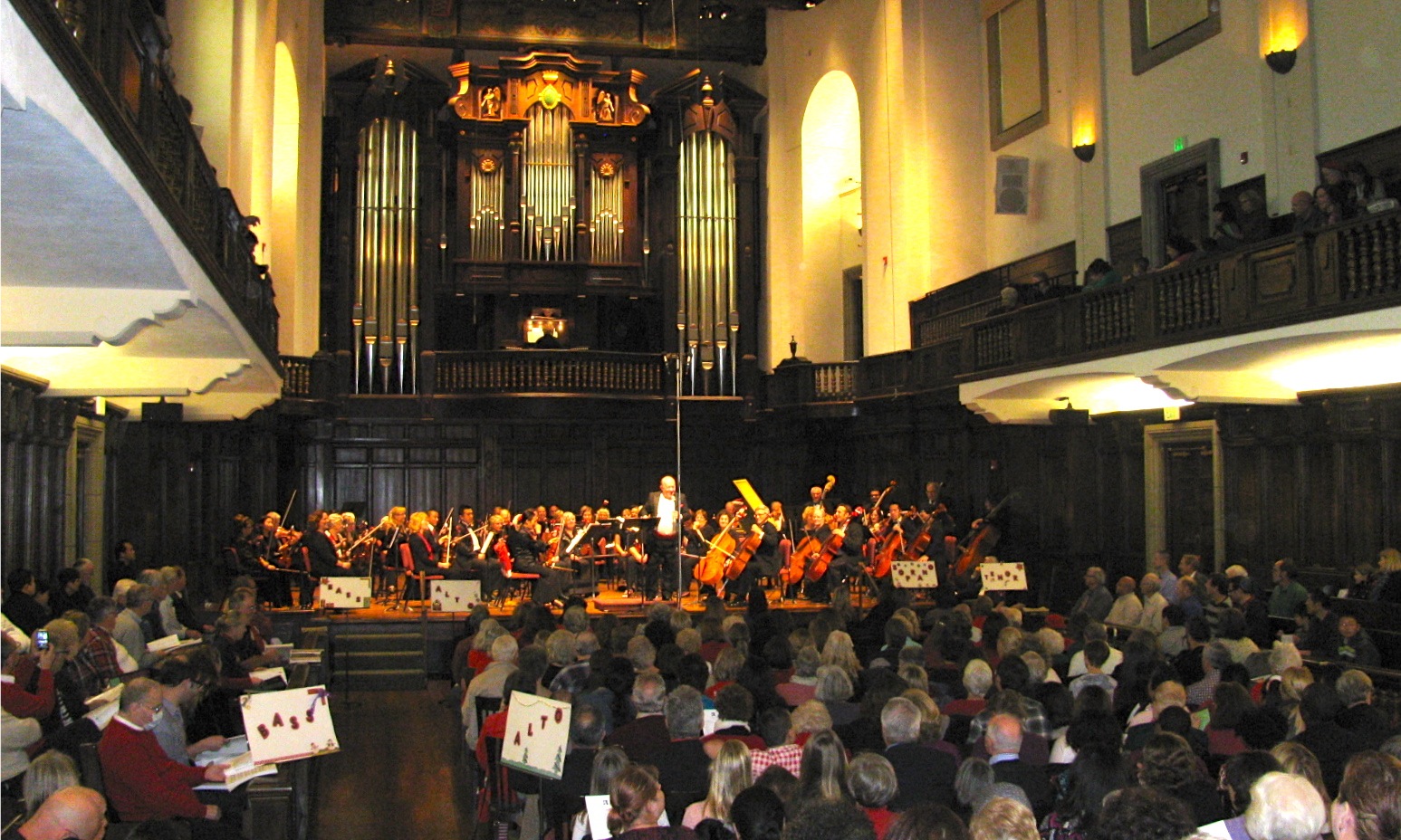 On Sunday, the wood-paneled concert hall at Pomona College will be filled with people from Los Angeles, Orange, San Bernardino, and Riverside counties singing George Frideric Handel’s “Messiah.” I’ve taken part in the Claremont Sing-along Messiah every year since it started in 1982, and I always get goose bumps. It is an absolutely thrilling experience to be in the middle of several hundred people who are singing together.

You can almost feel the anticipation in the air as people enter the Bridges Hall of Music and find a seat in one of four sections according to their vocal range: alto, soprano, tenor or bass. Those who do not want to sing usually sit upstairs in the balcony. The conductor has his back turned to the audience for the orchestral movements and for the solo parts that are performed by four professional singers. But he turns to conduct the audience in singing the seven choruses, ending with the majestic “Hallelujah Chorus.”

This year’s “sing”—the 32nd—will be dedicated to the founder and longtime conductor of the Claremont Sing-along Messiah, Dr. James Fahringer, who passed away unexpectedly earlier this month. A few days before he died, Jim told me that the sing-along was intended as a “musical gift to Claremont.”

At the time of the sing-along’s founding, Dr. Fahringer was the musical director of the Claremont Symphony Orchestra, a volunteer orchestra that has been going strong since 1953. This kind of sing-along concert wasn’t popular yet in 1982 but it was an instant hit.

In the early years, the Sing-along Messiah had the feel of a town party— the audience was made up of mostly locals. I have a long-running joke with one woman, who I’ve known since college; we always say, “I’ll see you next year in the alto section!”

In 2011, the 620-seat concert hall filled up, and we had to turn a few people away. So we added a second performance in 2012. Both sing-alongs were full last year—and we expect the same on Sunday. Not only is the audience bigger but also people are traveling longer distances to attend. There’s a woman who comes to Claremont every year from Long Beach to sing in our “Messiah!”

You don’t have to be good singer to participate. It’s liberating to realize that nobody is listening to you because everybody is too busy singing as well as they can. It frees you up to flow with the music, and your joy is affirmed by being surrounded by all of those people.

Even though the “choir” (i.e. audience) changes annually, the orchestra musicians perform year after year. Some of our musicians have played with the orchestra since that first sing-along in 1982. Last Monday night, at the final rehearsal, the lights clicked off, and the orchestra was in total darkness playing one of the choruses. The musicians continued to play without missing a beat or seeing the conductor! It was enlightening to discover how well we knew the “Messiah.”

One of my favorite parts is the “Hallelujah Chorus” at the end of the performance. Every year, it’s the same. You’re singing these hallelujahs at the top of your voice…and then there’s a brief break before the last one. You can just feel it—everyone is hoping no one falls into that “hole” of silence. And no one ever does. Everybody always quits singing right on time. It’s a feeling like: We made it! Then you sing that last hallelujah, and you really feel it.

The Claremont Sing-along Messiah has become a marker of time for me. I remember taking my children to those first performances. Years later, my daughter sang the solo alto part. Sitting in the audience with my granddaughters, I saw the tradition coming full circle. For my family, the Claremont Sing-along Messiah has been exactly what Dr. Fahringer intended: a musical gift.