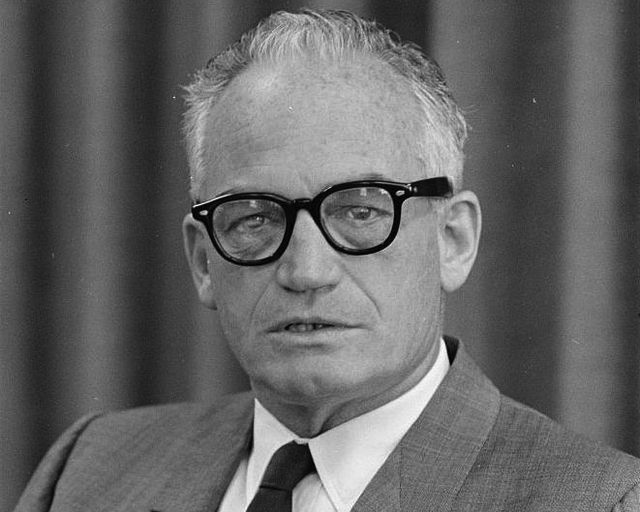 Helping to carve out a prominent role for business in politics

Nurturing a business-first and states’ rights conservatism within the GOP

Believing in the potential of individual pursuits free of government meddling

Known as “Mr. Conservative,” Barry Goldwater played a pivotal role in convincing President Nixon to resign in 1974 and in reorganizing the Pentagon in 1986. But even more than what he did, there’s what he said: According to William F. Buckley Jr., Goldwater was a “crystallizer” who helped translate conservative ideas in simple and effective terms.

Indeed the power of Goldwater’s words figured prominently in his 1998 New York Times obituary, which described him as “recklessly candid”—a five-term U.S. Senator who “rarely engaged in understatement,” whether decrying the impact of the New Deal or championing the Constitution, state’s rights, or business interests.

Goldwater’s brand of libertarianism defined Arizona conservatism in the middle of the 20th century and is credited with sparking the resurgence of the American right in the 1960s. But what role does it play in the state and country today?

In advance of the Zócalo/Arizona State University event, “Is Goldwater Libertarianism Dead?”, we asked scholars and thinkers: If Barry Goldwater were alive today, what would he claim as his greatest legacy?

Helping to carve out a prominent role for business in politics

In a 1937 editorial in The Phoenix Gazette, a local department store owner denounced the typical American businessman as a “scared-e-cat.” The writer, Barry Goldwater, suggested most of his fellow businessmen opposed FDR’s New Deal but were too afraid to voice their opinions publicly. “There isn’t a businessman in this country today,” Goldwater wrote, “that does not fear the future status of our rising tax figure, yet he confines his suggestions for correcting the situation to his intimates who will agree with him.”

That situation has changed dramatically in the past 77 years. Candidates now regularly present their business experience as what best qualifies them for elected office. They suggest it gives them special insight in the creation of “business-friendly government.” Indeed, elected officials from across the political spectrum have come to see the promotion of private business development as serving the public interest.

The new prominence of businesspeople in politics is due, in no small part, to the actions of Barry Goldwater himself. In his first political campaign, a successful bid for the Phoenix city council in 1949, Goldwater touted his experience running Goldwater’s Department Store and ran on a platform that combined calls for “efficiency in government” with tax cuts designed to attract manufacturers to the then-small city of 100,000 residents. In his subsequent political career, both in the Senate and as the Republican nominee in 1964, Goldwater attacked America’s social safety net with calls to release business from the fetters of government control.

The political world as we know it today was created by Goldwater and the broad network of businessmen who supported his attacks on the New Deal safety net and regulatory apparatus. They may once have been “scared-e-cats.” They certainly are not today.

Andrew Needham teaches American history at New York University. He is the author of Power Lines: Phoenix and the Making of the Modern Southwest.

Nurturing a business-first and states’ rights conservatism within the GOP

“Of all the things I have done in my life,” Barry Goldwater remarked in 1981, “this one topped them all because she is not only a complete woman, but a dear friend and an Arizonan of whom I will always be proud.” The senior senator was speaking of Sandra Day O’Connor’s Supreme Court nomination. Goldwater’s pride had less to do with her historic confirmation than what her vote would represent: the kind of business-first and states’ rights politics that had been the hallmarks of his career.

Goldwater’s greatest legacy was nurturing this brand of conservatism within the GOP, both in the Arizona affiliate and national umbrella organization. Arizona was a one-party state until Goldwater and others on the Phoenix Chamber of Commerce began to build a stridently anti-liberal party. “My decision to register as a Republican,” Goldwater later explained, “was an act of defiance.”

He also dissented from the national leadership’s moderate Republicanism in his attacks on the New Deal. “The Administration,” he lamented in 1953, “has succumbed to the principle that we owe some sort of living, including all types of care to the citizens of this country.” Eisenhower, the first Republican president in 20 years, had made clear that he would not revoke the minimum wage, social insurance, union recognition, progressive taxation, and business regulation laws passed by Democrats. Goldwater, who described himself as proudly conservative, demanded Republicans “quit copying the New Deal … and remember that a two-party system needs two philosophies and not just one.”

By 1981, Goldwater’s vocal opposition to liberalism had chipped away at the New Deal reforms responsible for Democratic dominance. “It is to you we all owe the bringing of sensible conservatism out into the open,” a CEO enthused in a 1983 letter, “raising it to recognized importance and respectability …” After all, O’Connor’s 1981 nominator was Ronald Reagan. As the executive wrote to Goldwater: “You may have lost the one battle along the way but you are now winning the war.”

In The Conscience of a Conservative, Barry Goldwater wrote that America would return to the founding principles of limited government and individual freedom when and if the people elected representatives who proclaim: “My aim is not to pass laws, but to repeal them. It is not to inaugurate new programs, but to cancel old ones that do violence to the Constitution.”

The intrinsic libertarianism of most Americans is confirmed in Gallup and other polls, in the election of small government senators like Rand Paul and Ted Cruz and governors like Scott Walker and Mike Pence, and in the Tea Party that has not faded away but continues to play an influential role in electoral politics.

Fifty years ago, Goldwater wrote that our overriding political challenge is “to preserve and extend freedom.” In domestic policy, that meant reducing, not “streamlining,” government. In foreign policy, that meant maintaining a strong national defense because peace is best preserved through strength.

That philosophy still resonates with much of the American electorate, a testament to the enduring wisdom of the Founding Fathers and the common sense of a libertarian conservative named Barry Goldwater.

Lee Edwards is the distinguished fellow in conservative thought at The Heritage Foundation and the author of Goldwater: The Man Who Made a Revolution.

Believing in the potential of individual pursuits free of government meddling

For a charismatic, larger-than-life sonofabitch, Barry Goldwater had a pretty humble view of his impact on politics and the world. “I don’t think I’ve had the great influence that is attributed to me,” Mr. Conservative told The Phoenix Gazette just after stepping down from his fifth and final term in Congress. If pressed, he might cough up a regional intra-party success: helping tilt the GOP away from the stuffy northeastern establishment, and toward the wide-open Sun Belt.

So it’s left to us to chart the legacy strains of Goldwaterism. Start here with the obvious: In 2014, a half-century after Goldwater helped galvanize a new generation of self-consciously ideological young conservatives and libertarians into winning the GOP presidential nomination, another attractive upstart senator in his early 50s has vaulted himself near the top of the Republican field, on a message of constitutionalism, limited government, and fiercely independent thinking. Such are the parallels to Goldwater that if you scratch many Republicans who otherwise like Rand Paul, they’ll whisper that a Paul vs. Hillary Clinton match in 2016 would likely go down as the party’s most ignominious defeat since 1964.

But I prefer a less intuitive interpretation of Goldwater’s legacy. The Arizonan had an unwavering faith that the best stuff in life comes not through political action but through individual pursuits made possible in the absence of government meddling. “My faith in the future,” he wrote in 1979, “rests squarely on the belief that man, if he doesn’t first destroy himself, will find new answers in the universe, new technologies, new disciplines, which will contribute to a vastly different and better world in the 21st century … .” The modern world in all its cacophony has produced more such discoveries than even Goldwater would have predicted. The commies that the senator hated are long gone, and the rest of us increasingly share his distrust of government and preference for markets. He may not recognize our world, but we can recognize his fingerprints all over it.

Matt Welch is editor-in-chief of Reason and co-host of The Independents on Fox Business Network. He is author of McCain: The Myth of a Maverick, and co-author (with Nick Gillespie) of and The Declaration of Independents: How Libertarian Politics Can Fix What’s Wrong with America.