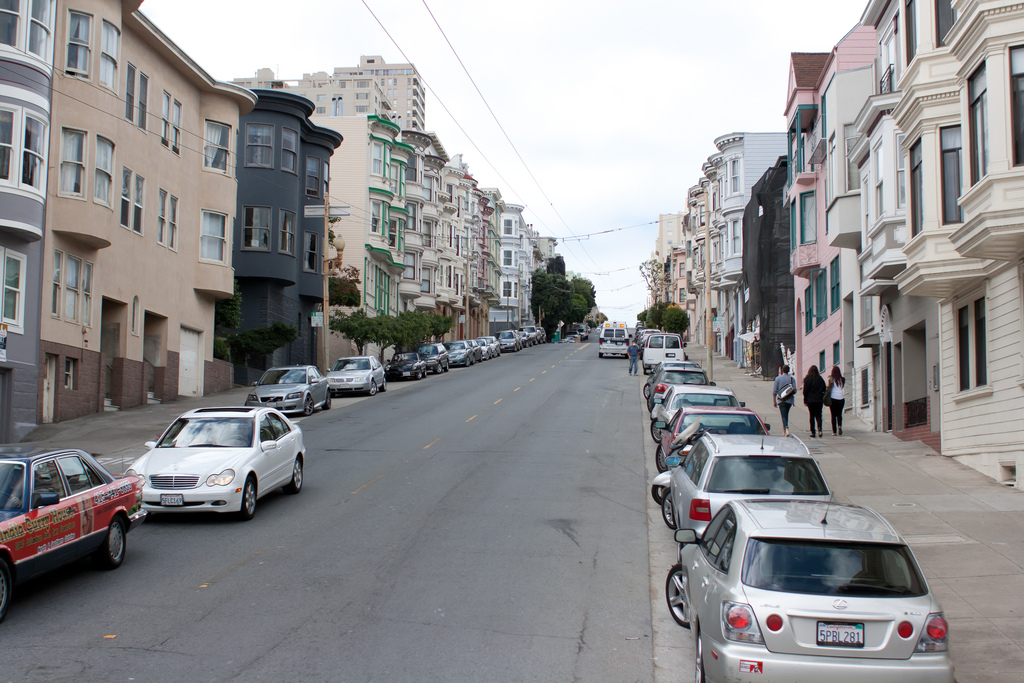 MonkeyParking is a smartphone app that gives car-owning San Franciscans an opportunity to auction off the street parking they are about to vacate. Just mark your parking spot in the app, and you’ll be notified when a driver is willing to pay for it. Bidding begins at $5. When you accept a bid, you wait until the winning bidder appears and then move your car out of the space to make way for its new “owner.” The bidder pays only after taking over the spot.

The order is “an open violation of free speech,” according to MonkeyParking CEO Paolo Dobrowolny. “I have the right to tell people if I am about to leave a parking spot,” Dobrowolny is quoted as saying at SFGate, “and they have the right to pay me for such information.”

That’s absurd, according to Matt Dorsey of the city attorney’s office. “Let’s be honest. It’s like a prostitute saying she’s not selling sex—she’s only selling information about her willingness to have sex with you,” Dorsey told SFGate, adding that “the company’s value is wholly premised on having paying members block access to parking spots on public streets until another paying member can replace the seller in the same spot.”

Is MonkeyParking auctioning off “access to a public space for private profit,” as Dorsey claims, and thereby violating San Francisco’s Police Code? Surely many attorneys will spend much time, and earn much money, deliberating this matter. But when they are done, what will we have learned?

Whether or not it’s illegal, this kerfuffle ought to prompt us to ask some bigger questions about the role of technology in our lives and the nature of the so-called “sharing economy.”

Suppose you buy a car that has heated seats. They may have seemed like an unnecessary luxury—at least, until the first time you use them on a freezing night. Then sitting there, appreciating the warmth on your backside, an idea occurs to you that you’d never have otherwise entertained: This steering wheel is pretty cold. Hey, what if we put little heaters in the steering wheel?

The point is that because it changes how we think, technology can never be neutral or faultless when it backfires or is used to questionable ends. The smartphone is no exception. Smartphones can generate never-before-available data. And people volunteer to provide the data for free when they click “Agree” after carefully reading the software’s End User License Agreement.

Before smartphones, no one could have conceived that information about vacating a public parking space could be bid upon and brokered. But just because smartphones now provide access to such information and the connectivity to move the information (and cars) in ways that seem efficient doesn’t mean that MonkeyParking is a good idea.

There are some obvious arguments against MonkeyParking and the other targeted apps, three of which have been made widely across the blogosphere and in media outlets. Salon called MonkeyParking an “example of how the ‘sharing economy’ can be totally bullshit” and Wired described MonkeyParking as an “anti-social” app that “merely lets one person grab something ahead of another.”

The first is the “public good” argument: Public parking is a public good from which private profit should not be made. The second is that the sharing economy should be about building community and not rewarding selfishness. The third is that the beneficiaries of MonkeyParking are people with smartphones (in fact, iPhones only, for now) and those with money to throw at their problems. As Emily Badger at The Washington Post’s Wonkblog points out: “These apps are likely to … threaten to price the poor and the smartphone-less out of parking.”

The counterarguments are that public parking is not a public good (since it’s not open to all—people fight over and pay for parking) and that if San Francisco’s government is inefficiently managing a scarce resource, we should embrace the innovators and entrepreneurs who can step in to fix the problem. What about the inequality argument? MonkeyParking’s Dobrowolny told SFGate: “It’s not just for rich people. If you think you can get that money back when you leave that parking spot, you can earn back the money when you leave the spot.”

One argument for MonkeyParking is that it optimizes the use of scarce parking spaces and thus reduces the time people spend looking for parking, which in turn cuts down on traffic, fuel consumption, and pollution. But who reaps the benefits? People who make enough money to make small amounts of time valuable. Does it make sense for someone making $15 per hour to spend $5 on a public parking spot to save 20 minutes?

The highest prices fetched through MonkeyParking are likely to be in places with the highest demand. If these are high-rent residential streets, or neighborhoods with popular commercial districts, then all that pollution that we’ve avoided makes the air more breathable for the people wealthy enough to live in these neighborhoods. MonkeyParking may not do much for pollution in, say, South San Francisco, where parking is easier to find—and freeways, idling diesel trucks, and power plants foul the air.

This brings us to the crux of the problem. The market economy rolls out new technology so quickly that we have scant time or space to have discussions about what role we want technology to play in our lives, how to strengthen neighborhoods and communities and rebuild our faltering democracy and its institutions, or what kinds of cities we want to live in.

So how, if at all, is this new “sharing economy”—or at least the economy MonkeyParking claims to be a part of—different than the “old” one? The “old” economy is based on a belief that personal property and wealth can be almost entirely unrestrained (drugs, sex trafficking, and insider trading are a few exceptions). So corporations maximize their profits with new products and technologies, and then accept smaller margins when the new product or technology is inevitably regulated to protect the public good. But the profits, which are reinvested in search of the next breakthrough, provide a valuable head start in the race with the regulators. It’s like the bootlegging Bandit staying just ahead of sheriff Smokey in the 1977 film classic Smokey and the Bandit.

And today? Dobrowolny is quoted in Ars Technica saying that he’s being unfairly targeted: “This is happening with our company and other companies operating in the social sharing space. This is yet another example of a local ordinance that was drafted in a world pre-shared economy which local authorities are improperly applying to a shared economy service.” If this sounds like the Bandit telling Smokey, “We know what we’re doing, let us get a head start and then when you figure out how to regulate us, we’ll oblige,” then maybe the new sharing economy is not so different than the old one.

But MonkeyParking isn’t a good stand-in for the sharing economy. The real heart of the sharing economy is its realization that the old economy has produced all kinds of excess, and that technology (or even just old-fashioned face-to-face meet ups) can facilitate the efficient use of these surpluses. At its heart also lies the unspoken premise that an economy based on sharing, while it might still allow accumulation of wealth, lacks the insidious logic that justifies extreme inequality.

MonkeyParking takes a scarce resource, one that is publicly and not privately held, and gives the privileged few the means to profit from the control of information about the resource. This is not “sharing” as open access but among an elite. Whether legal or not, it’s unacceptable. Maybe this time Smokey will finally catch the Bandit. As the adrenaline of the chase subsides, maybe we can finally start having discussions about the role we want technology to play in shaping more just, equitable, and sustainable cities.

Update: On July 10, MonkeyParking “temporarily disabled” its service in San Francisco, one day before a deadline to cease operations or face a lawsuit.