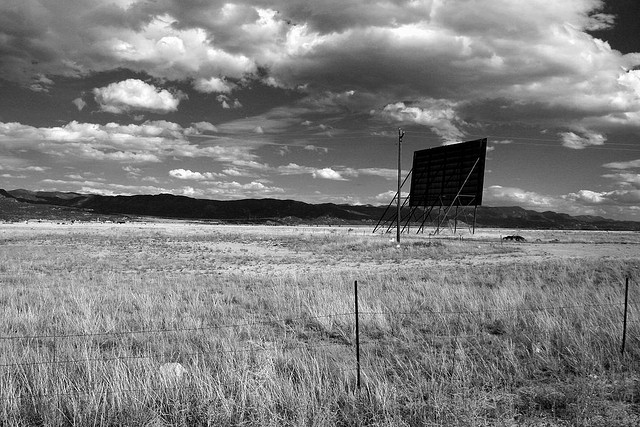 The still here of here was enough—a hidden spot
in the semi-dark of dusk at a drive-in theater.
We knew the feeling of being watched from behind
the screen, so we watched back, whispering a secret
we swore to tell. We were the stars, both watching
and acting, making it up—no different than the way
we lived with the knowledge that our bones were bugged
by the god who flickered in the gears of the hot projector.
We were so moved by the movie in the open air
that we continued seeing the giant screen long after
the credits ran. We saw the moon-lit lake beside the road
as the infinite reel of our own romantic comedy
and the moon as the moon as the bulb inside the machine
projecting our dreams onto the sky. We stopped the car
at the shore for this second feature, then put down
the top to listen to the waves beneath the stars:
“sough sough; lap lap.” Such tepid applause for all
our jokes and vows. Such minor noise from the little
waves on the cold flat stones of the beach where the life
guards meet after work on their long white towels.