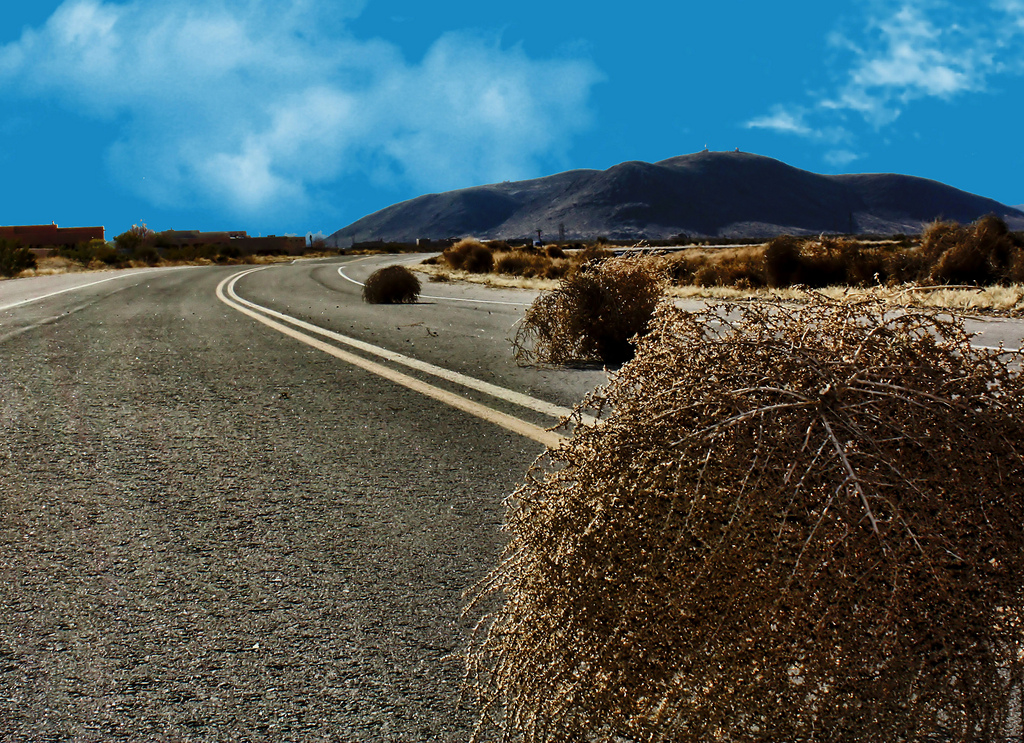 Kevin de León, the new leader of the California State Senate, recently caused a stir when he said that it would be a bad idea to begin building a proposed high-speed train in the San Joaquin Valley, in part because “nobody lives out there in the tumbleweeds.”

The remark not only showed that de León needs a bit of education on the Valley (where 4 million people live) but also cast light on an oft-overlooked plant.

Tumbleweeds, like the San Joaquin Valley, are misunderstood and full of surprises. While the plants are best known from their appearances in Westerns and Americana of the region, and tend to symbolize an untamed landscape, they are in fact foreign invaders, and rely on human development to spread.

The term “tumbleweed” can refer to any one of a variety of species, like Russian thistle and kochia. Generally, these plants are bushy and round, and their stem breaks off at the ground in the fall or winter, often after a frost. Then they get carried off by the wind, scattering seeds as they go. Some of these plants can hold hundreds of thousands of seeds. Gary Larson, a botanist at South Dakota State University, recalls that during his graduate study in North Dakota, he tracked a tumbleweed by the trail of seedlings it had scattered.

One type of tumbleweed, though, remains the most notorious—the plant you’ve probably seen in Westerns bouncing along the dusty ground. It goes by the name of Russian thistle, or Salsola tragus.

This irksome rogue hails from the steppes of central Asia, and likely stowed away in a batch of flaxseed from Russia, arriving in the mid-1870s to the charmingly named town of Scotland, South Dakota.

In the 1890s, a U.S. Department of Agriculture botanist named Lyster Hoxie Dewey was sent from Washington, D.C. to South Dakota to learn more about this weed, which had been causing problems amongst ranchers and quickly spreading, as National Geographic reported.

“The rapidity with which the Russian thistle has spread, both in infesting new territory and in thoroughly covering that already infested, far exceeds that of any weed known in America,” Dewey wrote. People told stories of tumbleweeds driving ranchers out of their homes through sheer abundance. The weeds to this day can cause problems like car accidents and are more than capable of knocking over fences.

By that time, it was already too late to halt the tumbleweed’s spread, and it could be found as far away as Canada—and California, by 1885. Today, tumbleweeds are present in every state except for Alaska and Florida (which is really quite a notable distinction, considering that Florida is famous for its invasive species, from Burmese pythons to lionfish). But tumbleweeds are most plentiful and obnoxious in the Great Plains, from North Texas to the Dakotas and west to the Rockies.

Today this plant is also found in most of California’s counties, according to the USDA Plants Database. But—take note Kevin de León—the tumbleweed is notably absent from San Joaquin and Fresno counties. It is still found in the Valley, though, and can be quite plentiful at times, said Patrick Akers, of the California Department of Food and Agriculture, Integrated Pest Control Branch. Part of Akers’ job is to help control the beet leafhopper, an agricultural pest that likes to live on Russian thistle plants—so he pays some attention to the plant’s abundance.

“No one really tracks tumbleweed populations,” he told me when I asked if the number of the plants had increased or decreased in recent years. Anecdotally, this past year there weren’t a lot of the plants.

Russian thistle, and other tumbleweed-forming species, excel at exploiting disturbed ground, land that has been plowed for crops, dug up to make roads, or trampled by livestock. And, owing to their arid origins, they can outcompete native plants in drought conditions.

“Tumbleweeds really are a product of human activity,” Akers said. For example, you can see them on roadsides, but if you walk past them into untrammeled fields or meadows, you won’t be able to find them. While tumbleweeds are excellent at germinating seeds in soil that has been loosened by humans (or cattle), they cannot generally compete in grasslands or more pristine areas, where the soil is harder to penetrate.

While tumbleweeds can cause problems, some people are actually willing to pay for them. In the 1990s, Kansas resident Linda Katz set up Prairie Tumbleweed Farms, a website purporting to grow tumbleweeds, as a joke. But she started collecting the plants when people began to actually order them—and at one point she reportedly made $40,000 a year selling them.

Russian thistle was not the only tumbler to come here without a green card, as it were. Basically all of the species known as “tumbleweeds” hail from Eurasia. Probably the second most notorious tumbleweed, known as kochia (Bassia scoparia), is also from central Asia, and is a nuisance throughout the Great Plains. It’s found in all but six states, and in several counties in California. A study of the genetics of tumbleweeds in de León’s favorite valley, the San Joaquin, found that one widespread “tumbleweed” in the central and southern Valley was a subspecies of Russian thistle that hails, perhaps surprisingly, from South Africa, and has been there since at least 1963.

The research also revealed two other hybrids, or variants of the species. So although the plant isn’t generally a problem in places where people haven’t disturbed the land—or introduced cattle to do it for them—these tumbling plants are adaptable and could continue to surprise in the future.

“Many questions occur regarding [tumbleweeds’] habits, life history, potential for invasion,” the study’s authors wrote. But it seems fair to say that as long as humans are around, so too will our tumbleweed tag-alongs.