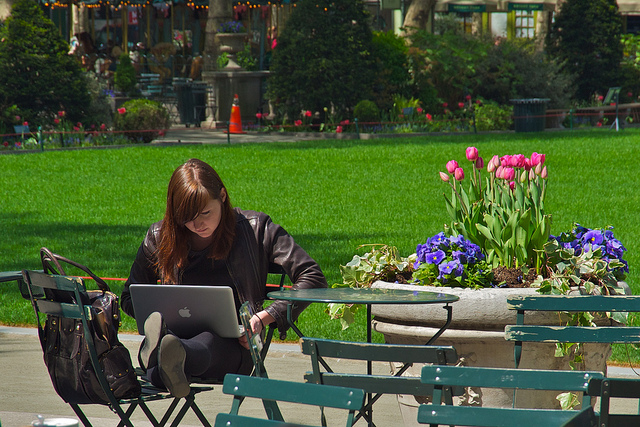 Losing one kind of entertainment, but gaining another

If cyberspace were enough, why do I see people fishing, picnicking, and stealing kisses at the park?

Public squares and parks are the sites of some of history’s most memorable moments: the beheading of Marie Antoinette during the French Revolution at the Place de la Concorde (then known as the Place de la Révolution) in Paris in 1793; the March on Washington in 1963, where a crowd filling the National Mall heard Martin Luther King, Jr.’s “I Have a Dream” speech; the pro-democracy protests in 1989 in Beijing’s Tiananmen Square, bringing us the indelible vision of the single man standing in front of a line of tanks. But these public spaces have also traditionally hosted markets, outdoor concerts, and cafés.

Enter the Digital Age, where every kind of information can be translated into bits and transmitted to mobile phones, computers, and TV screens. We can catch up on the news, buy goods, listen to music, watch webcams, and sign petitions—all without meeting in person. What does this mean for these storied public spaces? In advance of the Zócalo/Getty “Open Art” event, “Is the Digital Age Killing Public Space?”, we asked experts: How has the rise of digital technology changed the way we use public space?

Losing one kind of entertainment, but gaining another

I was drinking tea at a sidewalk café when three young women, no doubt University of Wisconsin-Madison students, walked in. I immediately looked forward to eavesdropping on them when they sat down, for that’s how I learn about student interests and life. But no such luck, for the three women immediately took out their iPhones and started texting. How curious, I thought. On the one hand, there was physical intimacy, for I could see that their kneecaps touched under the table. On the other, they ignored one another in favor of someone in another part of town or out of town altogether.

Were the three women philosophy students, I wondered? After all, Jean-Paul Sartre said that real conversation is impossible in a group of three and can only occur between two individuals in private space. But weren’t the women conversing one-on-one in private space when they texted? My answer is no, if only because text messages are more likely to be factual than discursive, and yet texting does have a moral plus in its favor: It encourages people to be honest—honest as machines are honest. If the three women chatted instead, the content of their chatting might still contain facts, but the facts will be qualified and even undermined by the tone with which they are delivered—that is, by body language.

Public space is body-language space, and as such provides endless entertainment. People watching, we say. Everyone is part of the show—the baby soundly asleep in her stroller no less than the mother feeding the pigeons, and as supporting extras the pedestrians parading back and forth. If more and more people are locked into the private worlds of their earphones and iPhones, will that not diminish—or kill—public space, which is space that justifies itself by, among other things, its power to entertain?

But the digital age can enliven and promote public space and do so without radical change in social habits and tradition. Think of Chicago’s Millennial Park, which draws a large crowd by means of the projection of the faces of ordinary citizens on giant screens. Or think of how this essay, so ineffectual when read in the private space of the library carrel, can woo an audience in an auditorium when it is supplemented by electronically projected images, even one of me—a feeble-voiced, octogenarian American-Chinese.

Yi-Fu Tuan is a philosopher, author, and emeritus professor of geography at the University of Wisconsin-Madison

Many social scientists predicted that, with the Internet, public spaces would stop being used. Instead, we are finding that the Internet (and especially Twitter and Facebook, which allow for rapid communication) can produce very large audiences involved and concerned about an issue, and they are showing up in public spaces. The Internet has expanded the public sphere—the political realm of ideas and conversation that is outside of the control of the domestic and “private” spheres of home and business. Many more people than ever before are included in the public sphere because they can comment on and even direct political conversations in ways that previous generations were not able to do except through newsprint, television, and book writing. It’s hard to keep this kind of energy constrained only to the virtual sphere of cyberspace.

Social movements and political uprisings belie arguments that public space and the public sphere have ever been separated. The centrality of a public square, park, or street as a place to come together to struggle, celebrate, grieve, and collaborate remains as vital as ever. Think of how people take to the streets or a square to express their rights to participate and be represented in the public sphere. The Arab Spring and the global Occupy movements drew inspiration from the jubilant atmosphere and contagious energy emanating from the crowds, from the urban design and siting of the public spaces where they occurred, and from the digital technologies that connected people through mobile phones and websites that alerted people to what was happening and where.

The end result is that digital technologies and the Internet are making dissent particularly visible and widening the political realm of ideas to include diverse publics and counter-publics.

If cyberspace were enough, why do I see people fishing, picnicking, and stealing kisses at the park?

A few days ago, I rode the Metro Gold Line to the park next to the East L.A. Civic Center.

The park is one of those L.A. places most people probably have never visited unless their car broke down nearby or they served jury duty in the adjacent courthouse. It’s a neighborhood place, featuring a nice (albeit manmade) fishing lake, a small amphitheater, and inviting green lawns and shade trees.

On this beautiful August evening—I was at the park for work purposes—there was no shortage of people. Sure, some stared blankly into Vader-black rectangles glued to their palms. But most park-goers, to my eye, were doing the kind of things people have always been doing in parks: picnicking, playing games, snoozing under a tree, stealing a kiss from the girlfriend. A young guy caught a smallmouth bass, then made his buddy remove the hook. The height of masculinity it was not. But it wasn’t a video game. It was man versus beast.

The so-called Digital Age may be in the process of unrepentantly swallowing whole newspapers, bookstores, libraries, and attention spans. But public space and all that goes with it seems quite immune to digital’s charms. On any given day, I can take a bus or train to a variety of plazas, squares, parks, beaches, piers, esplanades, walking paths—whatever you want to call them—and find plenty of people using public space as they always have.

If anything, the existence of cyberspace, which isn’t really space at all, makes most of us eager to see, touch, and feel anything that isn’t a 1 or 0. I don’t see that changing except for one thing: smartphones guarantee a future with more pics of people using public space.

Steve Hymon is a former journalist and the editor of Metro's blog, The Source.