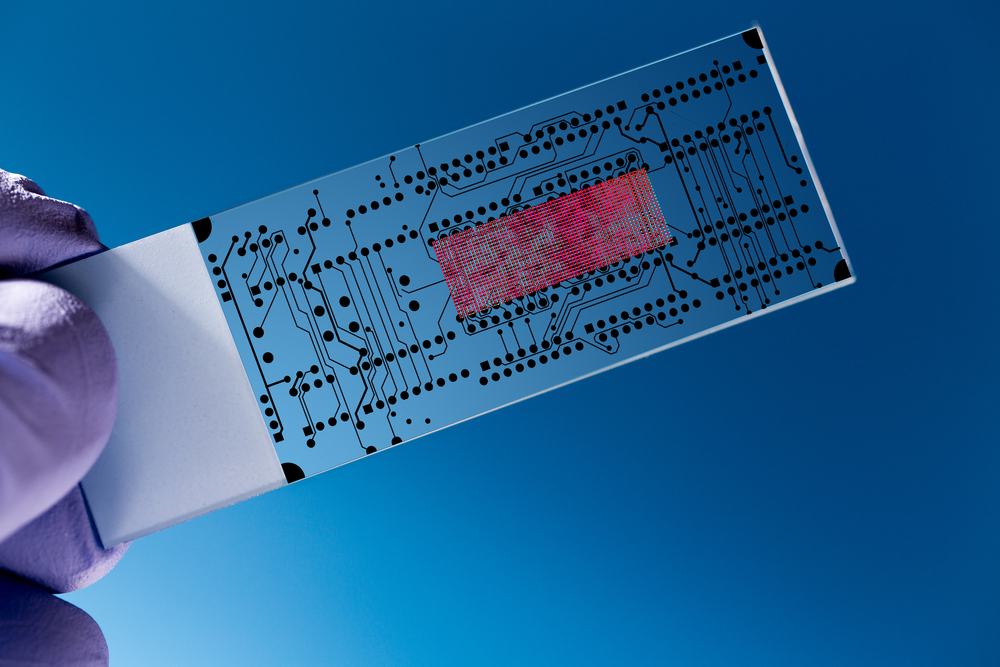 Addressing the gap between scientific innovation and human need

Rethinking DNA as a building tool

Developing governance as innovative as our science and technology

Synthetic biology has been called “genetic engineering on steroids.” It’s also been described as so difficult to pin down that five scientists would give you six different definitions. No matter how this emerging field is characterized, one thing is clear: the ability to synthesize and sequence DNA is driving scientific research in brand-new and exciting directions.

In California, scientists have created a breakthrough antimalarial drug—baker’s yeast made in a lab that contains the genetic material of the opium poppy. The drug has the potential to save millions of lives—and to ensure drug production that independent of poppy flowers. At MIT, researchers are working on a way for plants to “fix” their own nitrogen, so farmers will no longer need to use artificial fertilizers. And, in the far future, scientists and NASA researchers are looking to create a “digital biological teleporter” to bring to Earth life forms detected on Mars via a sort of biological fax.

What should we worrying about in this moment of tremendous, and potentially cataclysmic, scientific discovery? In advance of the Zócalo/Arizona State University event “How Will Synthetic Biology Change the Way We Live?, we asked experts the following question: Soon we’ll be able to program DNA with the same ease we program computers. What new responsibilities will be imposed on us?

Synthetic biology sees life as an engineering project— a repertoire of processes that can be reprogrammed to produce technologies and products. It envisions powerful new tools for constructing biological parts. Many in synthetic biology celebrate technologies like automated DNA synthesis as agents of “democratization,” potentially allowing easy and widespread access to custom-made DNA. According to their vision, these technologies will enable bioengineers to freely experiment with living systems, accelerating progress in innovation and producing enormous benefits for society.

But there are risks. The question is often raised: How can we prevent these technologies from falling into the wrong hands? DNA synthesis machines cannot distinguish between tinkerers and terrorists. Though this question is crucially important, it is revealing for what it leaves unasked. Why are synthetic biology’s tinkerers presumed to be the safe hands for shaping the technological future? Why do we defer to their visions and judgments over those that we collectively develop?

We tend to focus governance not on projects of innovation, but on how resulting technologies might be used in society. By attending primarily to technology’s “misuses,” “impacts,” and “consequences,” we confine ourselves to waiting until new problems—and responsibilities—are imposed upon us. Science is empowered to act, but society only to react. This leaves unexamined the question of who gets to imagine the future and, therefore, who has the authority to declare what benefits lie ahead, what risks are realistic, and what worries are reasonable and warrant public deliberation?

Our imaginations of the future shape our priorities in the present. It is a task of democracy, not science, to imagine the world we want to live in. Genuine democratization demands that we embrace this difficult task as our own, rather than wait to react to the responsibilities that emerging technologies impose upon us.

J. Benjamin Hurlbut is an assistant professor of biology and society in the School of Life Sciences at Arizona State University. Trained as a historian of science, he studies the intersection of science, politics, and ethics, with a particular focus on governance of emerging biotechnologies in the United States.

Addressing the gap between scientific innovation and human need

When it comes to programming DNA, the greatest challenge we face isn’t how to do it but rather for what purpose. How will we use the molecular tools we develop? The much-heralded promise is that genetic technologies will reveal clues to more effective treatment of disease. A serious challenge to making good on this promise is recognizing the social context—the values, beliefs, and structure in which these tools are called into being—that informs how scientists, policymakers, and the public prioritize their use.

We can start by asking why cutting edge biotechnologies have yet to solve our most intractable and dire global health problems. We assume that these new tools can be used to identify molecular targets to develop vaccines for neglected diseases disproportionately affecting low resource countries. And yet, a 10/90 gap persists in which a mere 10 percent of research is devoted to 90 percent of disease burden worldwide. In a market where male baldness and cellulite reduction take precedence over diarrheal diseases, malaria, and tuberculosis, we need creative economic solutions to bridge the widening expanse between scientific innovation and human need.

Our social agenda will inform not only what is programmed into DNA, but also who will ultimately benefit from this new technology. Will our efforts bolster advantage among the select few or alleviate the suffering of the invisible many? The answer to that question depends upon whether we decide to leverage our shiny, new tools to address head-on the very old and obstinate problem of inequity.

Sandra Soo-Jin Lee, Ph.D., is a medical anthropologist and senior research scholar at the Center for Biomedical Ethics at Stanford University School of Medicine. Her current book project is entitled American DNA: Race, Justice and the New Genetic Sciences.

Rethinking DNA as a building tool

For much of the late 20th century, scientists, writers, and the general public imagined DNA as information. It was code in the form of a chemical, a molecule that directed our development and determined our destiny. This discourse served to organize, guide, and inform the research agenda of scientists for decades.

DNA, as any high school science student knows, exists as a double helix. Its structure is made of four different types of nucleotide subunits—adenine, cytosine, guanine, and thymine. The exact sequence of an organism’s DNA is determined by what scientists call complementary base pairing: adenine always pairs with thymine; guanine connects with cytosine. This predictability allows scientists to synthesize strands of artificial DNA—a technique perfected in the 1980s—which, when properly treated in the lab, can link up to form the desired structure.

DNA nanotechnology is one part of the growing field of synthetic biology. What scientists will be able to do with the rapidly increasing capabilities is hard to project. To date, successes with DNA nanotechnology have included the construction of increasingly complex three-dimensional shapes, carrying out massively parallel computations, and building “DNA walkers” that can traverse a substrate and deliver “cargoes” of nanoscale particles.

For a historian of science, what is fascinating about this evolving field is this new perspective of DNA. We can no longer see it as just a blueprint for life … we now must also think of it as a building material. What kind of future will we build?

W. Patrick McCray is a professor in the history department at the University of California, Santa Barbara and the author, most recently, of The Visioneers: How a Group of Elite Scientists Pursued Space Colonies, Nanotechnologies, and a Limitless Future.

In the decades just before the turn of the 20th century, there was great hope among researchers, lawmakers, and the public that our (then) new understanding of genetics could help to alleviate disease. It was from this promise that the world witnessed the emergence of—and later the horrors of—institutionalized eugenics. Synthetic biology offers similar promise and requires vigilance on the part of those developing the technology to ensure its careful implementation.

Scientists and policymakers have a responsibility to think holistically about how synthetic biology could affect individuals as well as populations, societies, and the human species as a whole. If synthetic biology is carelessly used to create genetic homogeneity as a means to cure genetic disorders, it could be detrimental. From an evolutionary perspective, genetic diversity has been key to the success of our species as it offers alternate solutions to environmental stressors. Alternatively, synthetic biology could also be used as a tool to create new types of genetic variations that, in the right environment, could ensure the survival of our species.

The development of this technology should be driven by the same ethical tenets that drive all current scientific research: respect, beneficence, and justice. The promise of synthetic biology rekindles hope in the discovery of a kind of genetic panacea. But the advent of this technology should, at the very least, solidify our resolve not to repeat the errors of the eugenicists of the past.

Jada Benn Torres is an assistant professor of anthropology at the University of Notre Dame. As a genetic anthropologist, her research interests include genetic ancestry, human variation, and women’s health.

Developing governance as innovative as our science and technology

Synthetic biology will present us with an ever-growing number of choices. Choices about what we eat. Medicines we take. Fuels we use. Products we buy. Clothes we wear. Pets we own. Enhancements to our bodies and minds. These new choices will provide us with many important benefits—but they will also confront us with challenging dilemmas.

Some choices made possible by synthetic biology will affect only individuals and their families, while others will have a much wider reach. For example, buying goods made by synthetic biology may displace workers in other nations who make the same products using older technologies or raw materials. When we enhance our own capabilities using synthetic biology, we put pressure on others to make similar enhancements or risk being left behind.

There may also be safety and health risks from the individual choices we make. If people create new organisms in their garage or basement using DIY biology, they may inadvertently create pathogens that put others at risk in their neighborhoods, cities, or even beyond.

Individual choices empowered by synthetic biology with the potential to adversely affect others will put additional burdens and pressures on our societal institutions to make more (and better) governance decisions.

And that is where the problem and danger really lies: At the very moment that new technologies like synthetic biology require us to make more complex decisions, our societal decision-making institutions have never been more broken. Our regulatory agencies are overwhelmed, under-funded, and ossified, our legislatures are gridlocked by partisan bickering and too much information and issues, and our courts are glacial and lacking scientific competency. We urgently need new innovations in institutions and governance to match the rapid new innovations in the science and technology of synthetic biology.

Gary Marchant is Lincoln Professor of Emerging Technologies, Law and Ethics and faculty director of the Center for Law, Science & Innovation at Arizona State University. He teaches and researches governance of emerging technologies.