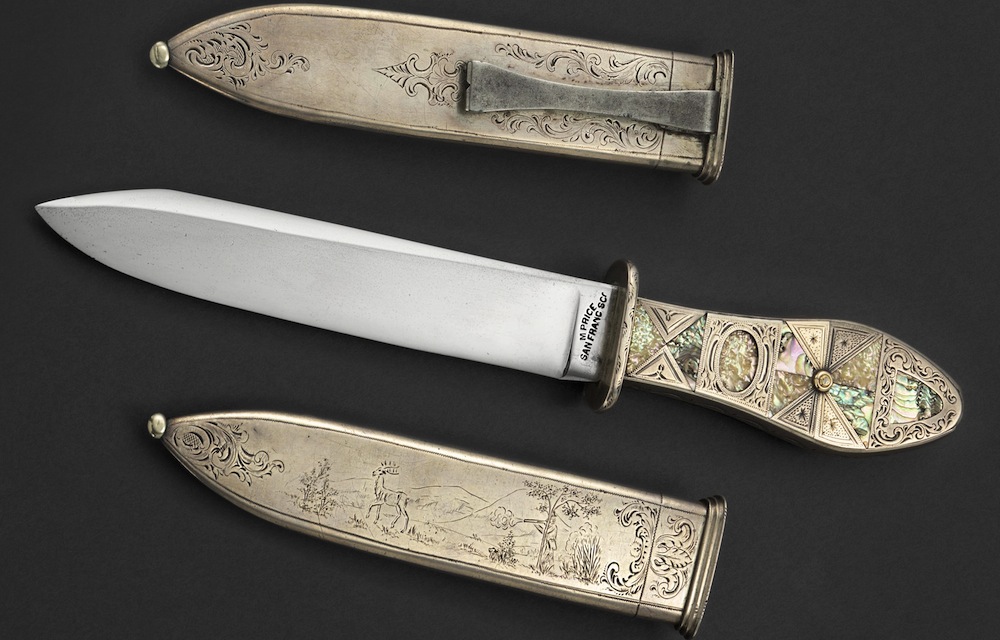 Even in the ball-room, the place, above all others, consecrated to pleasure, and where personal encounters should be least expected, these instruments of death are carried.      —Little Rock Times, February 28, 1835

At an interesting time in our history, folks started wearing weapons as a part of their daily attire, to work and to play. In the 1830s, citizens of the Mississippi River Valley, in such communities as New Orleans, Natchez, Vicksburg, and Little Rock, armed themselves. They chose small weapons popular at the time—single-shot pistols, sword canes, and knives—as business accessories. Unlike some weapons advocates of today, they had no particular wish to make a point regarding “open carry.” Theirs was a response to changing circumstances, brought on, or at least assisted by, a technological advance: the steamboat. At least that’s my theory.

While weapons were universal on the frontier—almost every household had a rifle and all had a few good knives—communities prided themselves on order and stability. People moved west from such communities and settled into new places with the same desire to have order established, bringing with them the solid influence of law, religion, and women. The violence that seemed to plague every new outpost represented growth pangs of civilization, the friction between the wild and the settled, an anticipated, if unpleasant, transition.

This was the situation on the Mississippi and its tributaries once Louisiana opened to immigration after the Purchase in 1803. The influx proved disastrous for the native populations there, whose relations with France and Spain had been mutually respectful for generations. New American communities popped up all along the rivers, and the newcomers seemed to absorb everything before them. Initially, travel to and from these communities consisted of overland treks, under animal or human power, or water journeys, in flatboats or keelboats. Flatboats only went one way—downstream—and keelboating was slow and arduous, at least upstream. So travelers arrived in dribs and drabs: a few wagons here, a flatboat there.

Because of universally acknowledged dangers, traveling with weapons was a social convention. The influx of armed folks in small groups offered no problem for the communities of the West. But then, with the advent of the steamboat age after the War of 1812—and ever larger steamboats—the streets of the West suddenly had to accommodate hundreds of armed travelers with the arrival of each boat. This armed invasion and a related increase in gambling and other dodgy activities encouraged the citizens of these towns to arm themselves, even when they weren’t traveling.

Weapon choices were limited in their basic form, be it pistol, sword cane, or knife. But elaborations on the theme of knife blossomed for the fashionable consumer. The men of the 1830s and 1840s could choose among a delightful (or frightening, depending upon your perspective) assortment of self-defense knives, as they sought to maintain the balance of power in the communities of the West. Indeed the market demanded a new name for these bladed weapons, and the country settled on two: bowie knife and Arkansas toothpick.

Jim Bowie killed a man with a knife in a duel gone bad—Jim was not one of the duelists, but he was an after-the-duel fighter—near Natchez in 1827. Some folks later declared that moment the birth of the bowie knife. “All the steel in the country was immediately converted into bowie-knives,” remembered one 1837 newspaper. About the same time, “Arkansas knives” came to be referred to in newspapers and advertisements, later to become “Arkansas toothpicks.” The Arkansas connection likely stemmed from the frontier nature of the place—where the unkind stereotype suggested violence settled all disputes and folks picked their teeth with large knives—and perhaps from the presence of James Black, a pioneering cutler whose knives were copied widely.

Black made a knife utilitarian in form but highlighted with silver wrapped around the end of the pommel and on the other exposed metal areas of the handle. These knives didn’t include a cross guard or a clipped point, both of which became among the defining characteristics of a bowie knife. Daniel Searles of Baton Rouge, and, early on, Henry Schively of Philadelphia, were inspired by the traditional Mediterranean dirk knife, as more and more knife makers from around the country answered the surging demand. But American cutlers were soon eclipsed, at least in terms of the volume of production, by the powerful cutlery industry of Sheffield, England, which jumped into almost every market around the globe.

In terms of design, knives could be works of art: witness the production of Samuel Bell and California cutlers before the Civil War. Bell’s skill as a silversmith left us with beautifully crafted knives and integrally connected sheaths, and California knives often featured local resources—including abalone and gold—to punctuate the maker’s creativity.

All things considered, the bowie knife world offered every variation in handle, guard, blade, and sheath. You could choose among handles of different woods, ivory, horn, silver, even those California abalone shells, enhanced by precious metals, or nickel silver, in a variety of shapes, some with elaborate pommel caps (crowns, horse-heads, and the like) or with panels that might include an image of the notorious half-horse/half-alligator or a reclining lion, as some makers seemed to forget that these were tools meant to fit comfortably in a hand. Guards went from none at all to simple projections to eagle wings to elaborate pressed metal. And there was the matter of blades to consider, from 6 to 12 inches and beyond, flat-backed, clipped pointed, spear shaped, with etched, stamped, or engraved decorations involving patriotic slogans, interesting images, or anything that might entice the buyer. The result: a flowering of style the humble self-defense knife had not seen for centuries.

Today, bowie knives and Arkansas toothpicks are prized collector items. Long lost to the modern definition of these knives is their early incarnation as fashionable weapons for the fashionable man (gone by the time of the Civil War). And those who use knives all the time—cooks and hunters, especially—wouldn’t normally chose bowies. But the creativity spent on the early knives is not lost to us today. Popular culture regularly returns to the 1820s and 1830s for historical stimulation. “Andy” Jackson, “Davy” Crockett, the legendary brawler Mike Fink, Jim Bowie, and the saga of the Alamo all evoke a time when the most effective weapon in one’s arsenal was likely a knife. The life-and-death nature of these objects heightens our appreciation of them as tangible links to our pioneering past.