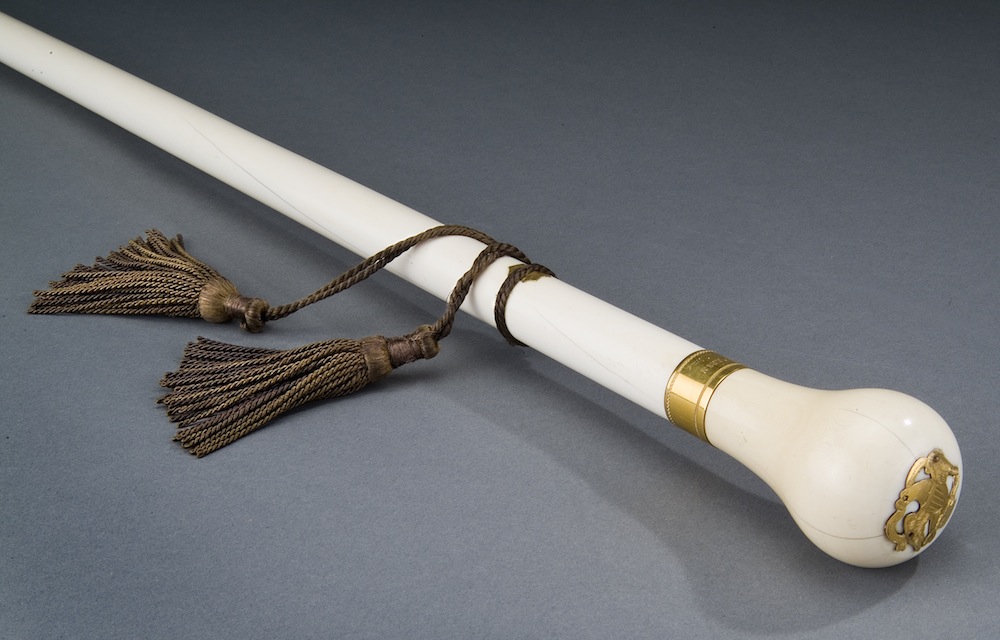 The history of American democracy is often best revealed not in the nation’s founding documents, but in the activism and struggles of countless individuals to create a more perfect union. Held within the Smithsonian’s vast collections is a 3-foot-long ivory cane made from a single elephant tusk, topped off with a gold-inlaid American eagle grasping a scroll. It is a treasured and curious memento from one of these struggles—the battle to preserve one of the most basic rights of citizens, the right to debate and protest.

In developing the exhibition American Democracy: A Great Leap of Faith, which will open—mark your calendars—July Fourth weekend, 2016, we want to explore some of the most elemental debates and issues that have confronted the founding revolutionary generation and that resonate to this day. Americans have viewed the right to petition—which plays out in our right to debate openly, lobby government officials, and mount Internet letter-writing campaigns—as a very basic democratic right. We’ve continued to exercise it to shape our country beyond the ballot box. We may take it for granted today (see this petition to start construction on a Star Wars-inspired Death Star by 2016), but it was under serious attack in the 19th century. Americans in the formative years of the country clashed over the most limited aspirations of its founding documents and helped define the practical meaning of democracy.

The elegant cane was presented to Massachusetts Congressman John Quincy Adams—the former president—in March 1844, by Henry Ellsworth, commissioner of the U.S. Patent Office. It featured Adams’ name and the Latin words Justum et tenacem propositi virum (“A man just and firm of purpose”) on a band below the knob. This was not a cane that served any practical purpose, but rather was a ceremonial object, a trophy to recognize Adams for his role in the ongoing battle to abolish slavery. The cane was a gift from Julius Pratt and Co. of Meriden, Connecticut, one of the country’s leading importers of ivory. Pratt, an active abolitionist, asked Ellsworth to present the cane to Adams to honor him for his long campaign to defend the right to protest the institution of slavery and his battle against what had become known as the House of Representatives “gag rule” covering all anti-slavery petitions.

The idea of a gag rule on petitions presented to Congress on any subject seemed a contradiction and assault on the very idea of democratic government. It was an ancient privilege that dated back to the rights of subjects to petition kings and lords to redress grievances or ask for favor. The First Amendment of the Constitution established that Congress shall make no law restricting “the right of the people peaceably to assemble, and to petition the Government for a redress of grievances.” Not limiting their participation to electoral politics, individuals and groups with very different resources brought their interests and concerns before the nation: on the streets, in back rooms, and through the media of their times. In the early American republic, petitioning provided disenfranchised poor white men, women, free blacks, and other minorities a means to voice their concerns and to claim a role in determining the direction of the country.

Pratt requested that when Adams successfully defeated the rule, he add the date of his victory to the inscription. Adams wrote in his diary, “I accepted the cane as a trust to be returned when the date of the extinction of the gag-rule shall be accomplished,” and asked Ellsworth to keep the cane until that time.

The campaign to defeat the gag rule had become a major symbolic focus of the revitalized abolitionist movement. In an effort to promote a national debate on slavery, abolitionists had organized petitioning drives in the 1830s, calling on Congress to prohibit slavery in the nation’s capital, the one undisputed area the legislature controlled. Traditionally, petitions to the House of Representatives were presented individually and then assigned to the appropriate committee, which would recommend action. Southern representatives and their Northern allies argued that giving even this much attention to the subject served to heighten regional tensions and to promote violent slave rebellions. To cut off the abolitionists’ efforts, the House of Representatives adopted on May 25, 1836, a resolution that all petitions, resolutions, and memorials regarding slavery or abolition would be tabled without being read, referred on, or printed.

This original gag rule, which under the rules of the House of Representatives needed to be reaffirmed with each new session of Congress, and was, for roughly eight years, was denounced as an infringement of the First Amendment. Rather than discouraging petitioners, it actually energized the movement of those who argued that the suppression of debate was yet another example of the willingness of slave-holding Southern politicians to trample on the rights of all Americans so as to preserve their so-called “peculiar institution.” Abolitionists promised that the gag rule “shall be a ‘firebrand’ in our hands to light anew the flame of human sympathy and public indignation.”

Petitions from anti-slavery societies flooded the Capitol, thanks in large measure to the growing activism of women. The anti-slavery groups found additional support outside the movement from sympathizers who questioned how a democratic society could exist if people’s voices and debates were censored on the most central issues of the day.

The petitioners found a champion for their cause in Adams, who had returned to Congress in 1831. Year after year, Adams introduced anti-slavery petitions and railed against the gag rule. He argued that the refusal to accept the petitions was “beneath the dignity of the General Legislative Assembly of a nation, founding its existence upon natural and inalienable rights of man.” Each time, the House voted against his resolutions. The growing petitioning drives found popular support across the North and West, created mounting political pressure. On December 3, 1844, in a vote of 108-80, the gag rule was abolished.

Although this might seem like a small victory in the history to end slavery, at the time the vote was viewed as a major defeat for the South, a recognition that its power over Congress wasn’t absolute. And indeed, the feeling that their institutions were now under attack by significant hostile political forces helped to fuel a burgeoning Southern secessionist movement in the following decades.

The anti-slavery petitioning drives of the 1830s and ’40s strengthened the abolitionist movement and served as a training ground for future women’s and civil rights struggles in the years that followed. They also helped challenge and redefine the meaning of American democracy and the unfulfilled promises in the nation’s founding ideals, asserting the principle that beyond the ballot box, citizens have a role in shaping the debate and policies of their government.

Following Adams‘ victory, Ellsworth had engraved on the scroll above the eagle “Right of Petition Triumphant” and sent it on to Adams for him to add the date. On the tips of the eagle’s wings, Adams asked a jeweler to add “3 December” and “1844.” Adams, who normally refused gifts from political supporters, returned the cane to the Patent Office. In his will, Adams bequeathed it to the United States, and the Patent Office later transferred it to the Smithsonian.

Soon it will be on display, as an evocative—if not as well-known—icon of American democracy as the Constitution itself.