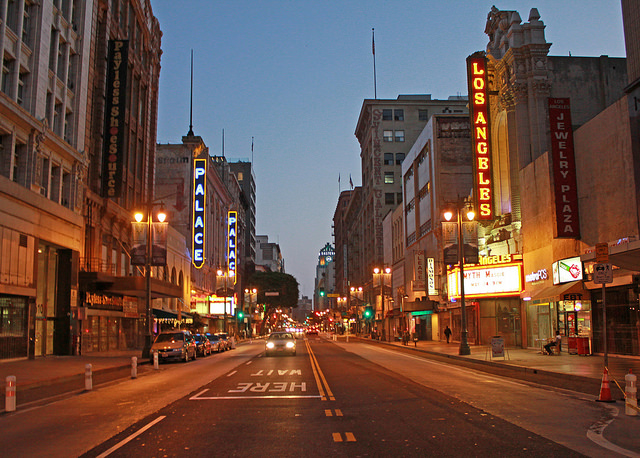 Give L.A. a vibrant urban center that belongs to all of us

Big changes (and losses) for the surrounding communities

When the Ace Hotel opened downtown in early 2014, a billboard announced its arrival with two simple words: “Hello LA.” The sign epitomizes a revitalized downtown Los Angeles intent on making its presence known throughout the entire city. The hotel has fashioned itself as a beacon for what the historic core’s future could look like: a blend of high fashion, culinary fireworks, and avant-garde art.

All that sounds great for the occasional shoppers and diners who visit downtown and for its growing young, urban professional population. But what about the rest of L.A.? In advance of the Zócalo/UCLA event “Will Downtown L.A. Rival the Westside?”, we asked people who study, work, and live downtown the following question: How will downtown L.A.’s emergence change life in Southern California?

Contrary to popular opinion, Los Angeles has always been an intentionally multi-centered city. Beginning in the early 20th century, planners and reformers in L.A.–who wanted to avoid the concentrated poverty and noxious land-use patterns they saw in East Coast cities–deliberately created a fabric of low-density sprawl anchored by multiple civic and economic hubs. One result is that L.A.’s numerous centers have long competed with each other for investment dollars and political power. The apparent “rivalry” between downtown and the Westside (which has actually been going on for a half-century or more) is only the most recent incarnation.

In this context, it is critical to consider how ongoing competition for growth makes life more difficult for ordinary people. Tax breaks, construction subsidies, and union busting might lure investors to one or another of Los Angeles’ 80-plus independent municipalities, but these practices transfer the costs to inhabitants and workers, making the region’s poverty worse. One study found that 2.6 million, or 27 percent, of L.A. County residents lived in poverty in 2011–a number significantly higher than the official poverty rate of 18 percent because it takes into account the soaring costs of housing, especially in and around downtown, where the much-trumpeted “rebirth” is occurring. Moreover, L.A. County’s poverty–the highest in California–is exacerbated by its sprawling geography and political fragmentation. A key issue, for example, is transit. For low-wage workers who work in one of Santa Monica’s luxury hotels but can’t afford to live there, the high costs of transit can make the difference in whether or not they can pay their bills or feed their kids.

In response to these issues, organizations such as the Los Angeles Alliance for a New Economy and think tanks at L.A. universities have been pushing a specifically regional vision of equitable and inclusive growth in L.A. for decades. These advocates need to be ensured a consistent place at the planners’ table. Otherwise, downtown’s emergence will just make life more difficult–and expensive–for ordinary Angelenos.

Laura Barraclough is assistant professor of American studies at Yale University. She is the author of A People’s Guide to Los Angeles (with Laura Pulido and Wendy Cheng) and Making the San Fernando Valley: Rural Landscapes, Urban Development, and White Privilege.

Give L.A. a vibrant urban center that belongs to all of us

The very thought of downtown as simply a daytime job center is behind us now. For the past 15 years it has been organically assembled into a vibrant 24-hour part of our city.

But downtown’s revival is about more than the migration of high-end restaurants and young professionals to one part of the city; it’s the creation of a true urban center that has been missing in Southern California–and you can feel the energy as you walk along the streets.

As our train system continues to add track, it will bring thousands of riders daily to live, work, and play downtown. In 10 or so years, when Angelenos are boarding trains in Westwood for a 20 minute ride to downtown, more and more will shed their cars freeing themselves as only a big dense city allows–and the energy will spread.

What does this all mean for Southern California? It means a true urban center with all its charm and grit–giving you the feeling you only get in a vibrant city. It means a center for the arts and entertainment that is a train ride away. It means L.A. will continue to emerge as a gateway to the world as we check off the box that defines so many other important cities around the globe–dense, walkable, cosmopolitan.

The emergence of downtown is building a legacy by connecting the various neighborhoods of our great city. Instead of many, we finally have a place to pinpoint as the true center of Southern California.

And now when asked, “What should we do tonight?” in places like Sherman Oaks, Torrance, West Covina, and Glendale, more and more people are answering, “Let’s go downtown”–and feeling like it belongs to all of us.

Rob McRitchie is a vice president serving in Jones Lang LaSalle’s Development & Asset Strategy Group. He has over 15 years of real estate experience in markets covering the Midwest and Western United States and received his bachelor’s degree in urban planning and development from the University of Southern California.

Big changes (and losses) for the surrounding communities

Last week, I had an udon lunch in Little Tokyo with one of the many incredible writers in Los Angeles, Naomi Hirahara. We then walked around the neighborhood a little bit and talked about the anxiety many in the community are feeling about the coming Metro subway station, which has already displaced longstanding local restaurants Señor Fish and Weiland Brewery, and the fear that generations of a family could invest their lives into a business and cultivate a community, only to have it taken from them in the name of progress.

Considering the fact that no matter how much development is done, it can’t possibly bring the most envied characteristics of the Westside to DTLA—proximity to the beach and its accompanying weather and lifestyle—what can a question like “Will Downtown L.A. Rival the Westside?” be implying? Rival in what exactly? In self-obsessed, oblivious worldview? In unchecked white privilege? In having an entitled class who thinks it owns the beach? What does that question even mean? Just as descriptors such as “up and coming” does, such questions as this begins with the assumption that the place being developed is less than, is on the bottom, is in need of progress.

But I don’t really think or worry about downtown becoming this or that. Yes, rent is high and going higher. There is no historic culture in the heart of downtown that needs to be preserved. I do, however, worry about the communities directly connected to downtown, like Little Tokyo and Chinatown, even East L.A. and Boyle Heights, which are losing or on the verge of losing many of the decades-old businesses and legacies that have been the heart and spine of the community and of L.A.

Chiwan Choi is a partner at Writ Large Press, a downtown-Los Angeles-based indie publisher that produces the annual Grand Park Downtown BookFest, hosts the experimental pop-up space DTLAB, and organizes the PUBLISH! community writing and publishing project. Choi is also the author of two collections of poetry—The Flood and Abductions—and a weekly column at Cultural Weekly. His website is chiwanchoi.com.

Los Angeles is a city that lionizes its cultural products while cannibalizing its cultural producers. In thinking about the “ascendency” of downtown L.A., it is worth revisiting the factors that led to the Westside’s decline. Once home to a vibrant political, cultural, theatrical, literary, and music scene, the storied Westside is now a shell of its former self. Why? Because it became crueler, more racially and economically segregated, intolerant of dissenting ideas, over-policed, and unaffordable for people to live in.

Is downtown poised to meet a similar fate? If present trends continue, the answer is yes. Raising the profile of downtown Los Angeles has meant razing the spaces where downtown communities live. Redevelopment has entailed mass evictions, arrests, and displacement of long standing communities of color. The low-income black and immigrant Latino populations who reside in and populate downtown, have suffered some of the most intense rates of surveillance, harassment, displacement, and arrest in the city. While downtown capitalizes on L.A.’s vibrant hip-hop culture, profiling practices have excluded the very youth who produce it. If the Westside offers a cautionary tale, it is that an area can police and price itself into a state of cultural irrelevance. Downtown would be remiss not to heed this lesson.

For L.A. to be a great cultural capital it must invest in the public infrastructure that makes such culture possible rather than in policies of policing and exclusion. Downtown Los Angeles stands at a crossroads: Will it have a vibrant cultural core, or will it be full of expectant tourists, waiting in line at Bubba Gump’s, underneath the growing shadow of the city’s prisons, jails, and detention centers? Another city is possible, if not urgently necessary.

Christina Heatherton is an assistant professor of American studies at Trinity College. She has worked with the Los Angeles Community Action Network on two volumes Downtown Blues: A Skid Row Reader (Freedom Now Books, 2011) and Freedom Now! Struggles for the Human Right to Housing in LA and Beyond (Freedom Now Books, 2012) and is currently co-editing a volume with Jordan T. Camp entitled Policing the Planet (Verso Books).